In the lead up to International Women's Day on March 8 we are profiling five women involved in five different aspects of life at Swansea City. Here, we speak to Swansea City Ladies midfielder Emma Beynon.

Growing up in Swansea, it was always Emma Beynon’s dream to pull on the famous white shirt and play for Swansea City.

Along the way there have been no shortage of challenges and hurdles to overcome, and even now the midfielder balances her playing career with her job as a postwoman.

But she never fails to deliver, on or off the pitch.

The development in women’s football at grassroots and elite level becomes clear when Beynon – who grew up in Treboeth – reveals how her first experience of playing for a junior team came with a boys’ side. There was no girls team for her to join until she reached secondary school age.

“I played for a boys’ team from a young age until the girls’ team was established when I was 11 years old,” explained Beynon.

“I always knew from that age that I wanted to play football at the highest level I could.”

It’s a goal she has certainly achieved, enjoying six successful years in her current stint with the Swans’ Ladies set-up, experiencing Champions League and international football along the way.

“I first joined the Swans Centre of Excellence when I was quite young and ended up playing in the Swans set-up for around 10 years, before going away for a year,” says Beynon.

“I then came back to join the Swans Ladies in 2013, and I’ve never looked back since.

“The team morale within the dressing room is great. Everyone gets along and we’re all friends, it’s a great environment to be a part of.”

Beynon went to Ysgol Gyfun Gymraeg Bryntawe, a Welsh-language school, before going on to Cardiff Met University to study Sport and Physical Education, where she combined her studies with playing for the Ladies.

A devoted Swans fan, Beynon was a season-ticket holder at the Vetch where she regularly watched her heroes in the hope that one day she could represent her club in the same way.

“It feels really good to play for Swansea City, growing up in Swansea it was always a dream of mine to play for the Swans,” she added..

“I’ve been a Swans fan all my life and I even had a season ticket down The Vetch so it’s always been an honour to wear the Swans shirt.

“There is a buzz around playing for the Swans Ladies, if I mention to someone that I play for the Swans it’s always seen as a massive thing.”

It’s quite a family affair for the Beynon family and the Swans Ladies, as Emma’s older sister Samantha is a former Swans Ladies player, while Emma’s parents Yvonne and Paul can often be seen in the stands cheering her on.

“My family have been very supportive throughout my footballing career, they come to every game and even travel to all of my away games, so I am very grateful for that," she adds.

The 23-year-old’s performances have earned her Wales honours at a range of age levels and Emma received her first senior international cap, on International Women’s Day, in 2017 after representing Wales in their final game of the Cyprus Cup.

The then 21-year-old played the first 45 minutes for Jayne Ludlow’s side against Scotland in a battle for fifth place at the Tasos Marko Stadium.

“I had always wanted to represent Wales at a senior level, so it stands out as the biggest achievement in my footballing career,” she smiled.

At club level, Beynon regularly features in Ian Owen’s squad and represented the Swans in the Women’s Champions League qualifying round in Cluj-Napoca, Romania in September 2017.

There has been silverware and moments to savour along the way, but one does rank above the others for the playmaker.

“There have been many stand-out moments playing for the Swans, but I think going to Romania for the Women’s Champions League after being crowned Welsh Premier Women’s League champions in the 2016/17 season has got to be the highlight for me,” admitted Emma.

And all this has been accomplished while having to balance a full-time job with looking to perform to her best on the pitch.

Additionally, Beynon volunteers as a coach with the Swans Community Trust, relishing the chance to pass on her expertise to the next generation.

But it’s a task Beynon and her team-mates make without hesitation such is their love of the game and representing the club.

“It’s quite hard to balance my job as a postwoman and training with the Swans because I walk about ten miles a day delivering post,” she says.

“But I think my job has made me fitter which obviously helps with my training.

“Also, last month I took a group from the Trust’s PL Girls project to Newport where they played a team from Newport County, it’s a great initiative to be involved with.

“Watching them play was really good because it just reminded me of when I used to play, it’s almost like watching the next generation of Swans Ladies players.” 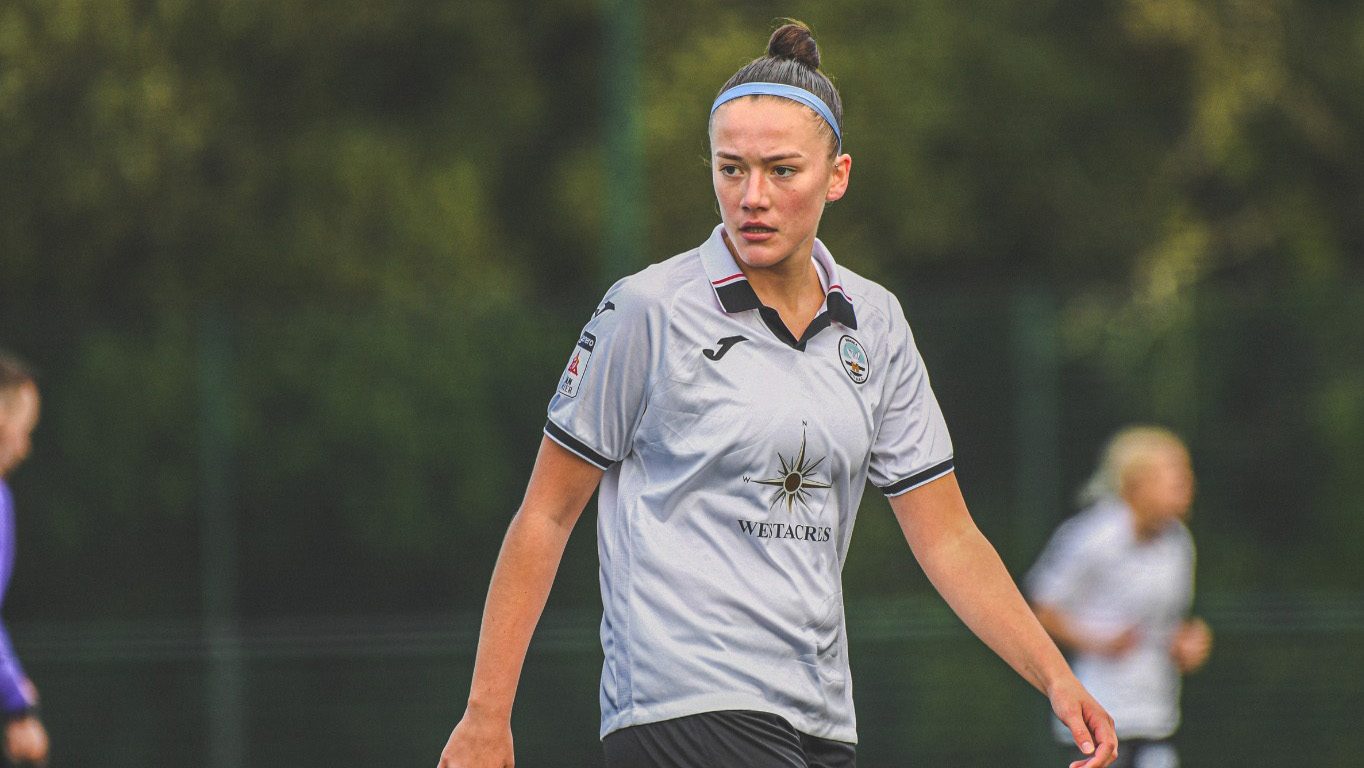 Nieve Jenkins | Stadium games are just the start for us

Swansea City Ladies Nieve Jenkins is relishing the tangible feeling of excitement as they prepare for their second match at the Swansea.com Stadium this season. 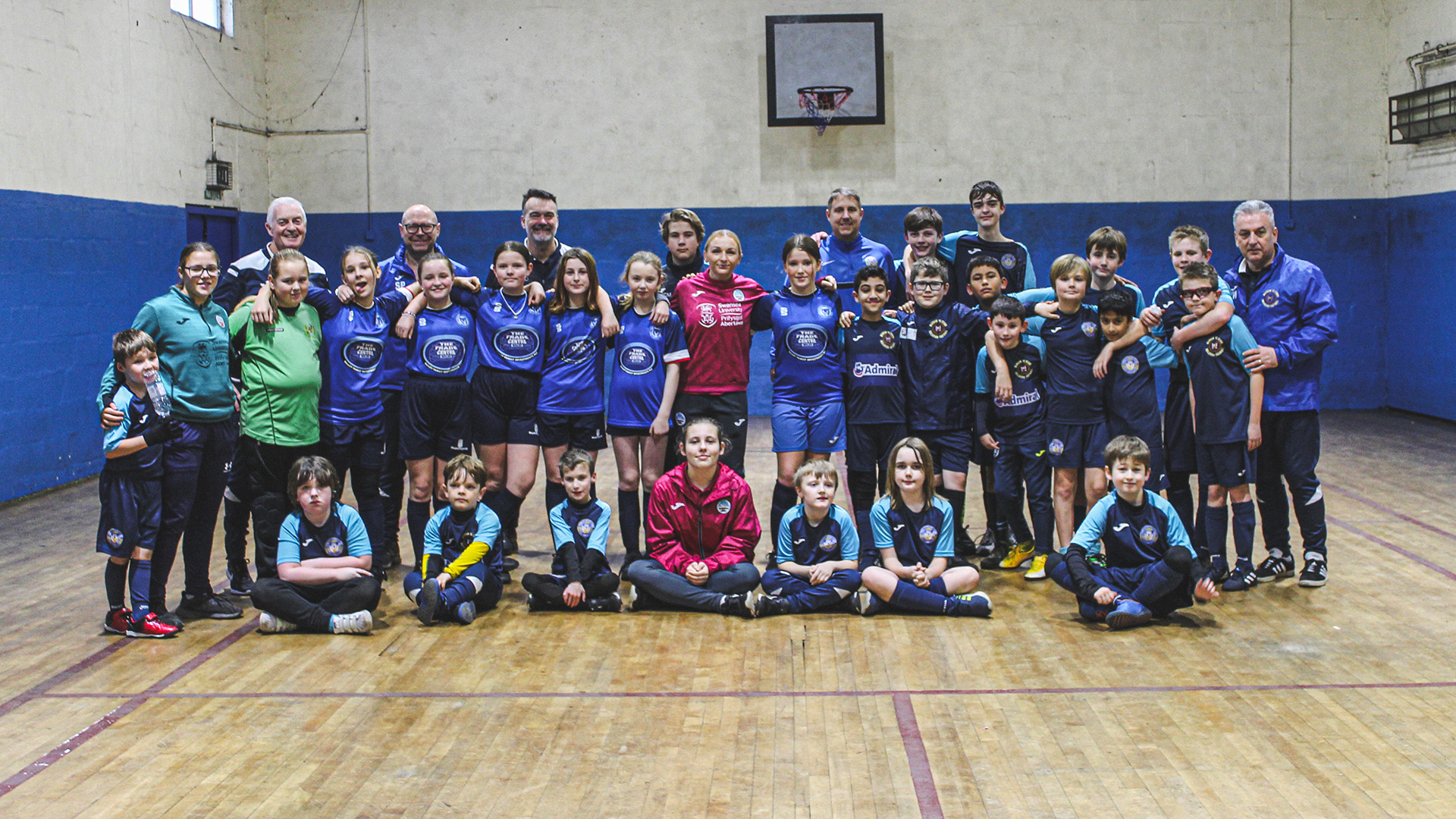