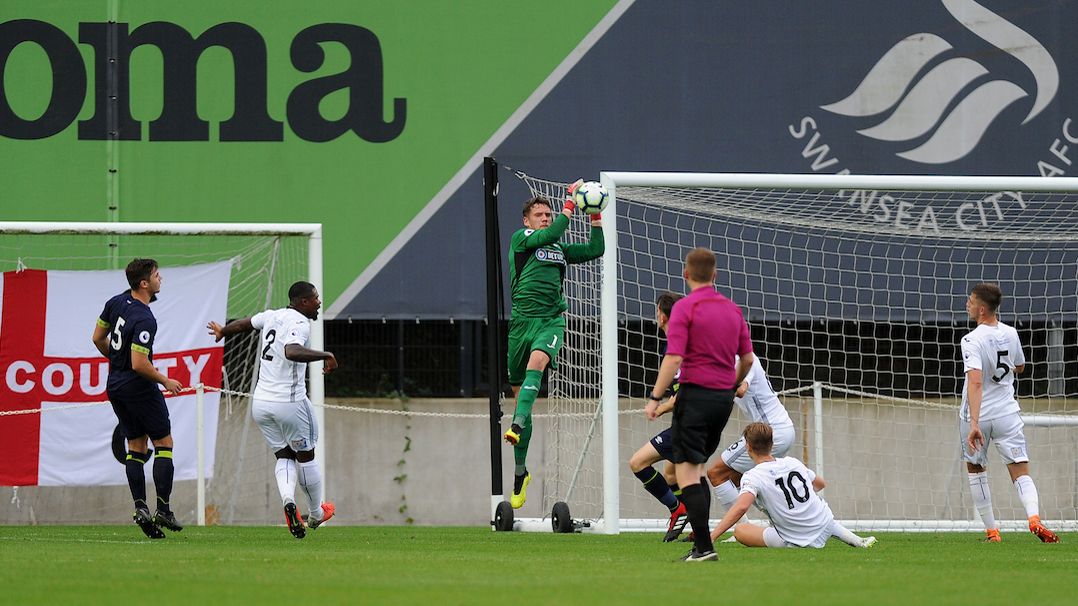 Swansea City Under-23s goalkeeper Josh Gould aiming to kick on after making his long-awaited return to action for the development side.

Gould played the full 90 minutes last night as the young Swans were beaten 3-1 by Manchester City in their final match of the Premier League 2 season.

It was only his fourth appearance of the season since arriving from Taffs Well in the summer – and first since September.

The 22-year-old has struggled to establish himself between the sticks following the good form of Steven Benda and Gregor Zabret, while a couple of injuries have also harboured his progress.

Nevertheless, given the young Swans’ battle to avoid relegation from the top flight of development football, Gould admits he fully understands the situation and, while sat on the sidelines, devoted his efforts into growing under the guidance of under-23s goalkeeping coach Martin Davies.

And he is hopeful that will lead to more game time in the near future.

“I’m absolutely delighted to make another appearance before the end of the season,” he said.

“It wasn’t a bad occasion to play either – away at Manchester City. It provided another good experience for me.

“It’s been a long time coming for me. Been in a relegation battle, it’s hard for the coaching staff to chop and change the team.

“Obviously, they’re desperate for results and, coming in as a first-year pro, I was always going to be behind Steven and Gregor.

“This year, my target was to get all the coaching I could from Martin and start to develop technically. I think I’ve done that and, over the past three or four months, I’ve really pushed on in training. I’m starting to make more of a statement now.

“I don’t want to be here just to say I’m a professional footballer; I want to be playing consistently.”

While Gould may not have appeared as often as he would have liked, his opportunities have coincided with big occasions.

In August, he came on as a substitute in the Checkatrade Trophy showdown with Stevenage, before starting against Liverpool at the LFC Academy a few weeks later.

The 22-year-old, who regularly trains with the first team at Fairwood, has also been part of the matchday squad for the young Swans’ visits to the King Power Stadium and Goodison Park throughout the campaign.

While admitting he initially struggled to adapt to the increase in standards, Gould believes he now feels more at home at the higher level.

“I’ve been thrown in at the deep end a few times, but they’ve provided very good experiences for me to take on board. Hopefully, I can use them as a stepping stone to push on,” he continued.

“At first, trying to adjust to professional football was a bit difficult. It felt a little bit weird sharing the same pitch with some top players, like I did against Liverpool.

“When I was training with the first team, I looked around and wondered whether I was good enough to be here.

“But, as the season has gone on, I’ve got used to it and started to back myself a little bit more. You also start to earn respect off your team-mates and the coaching staff, which has really built my confidence.

“Last night, I was less nervous about the occasion and enjoyed it a lot more.”