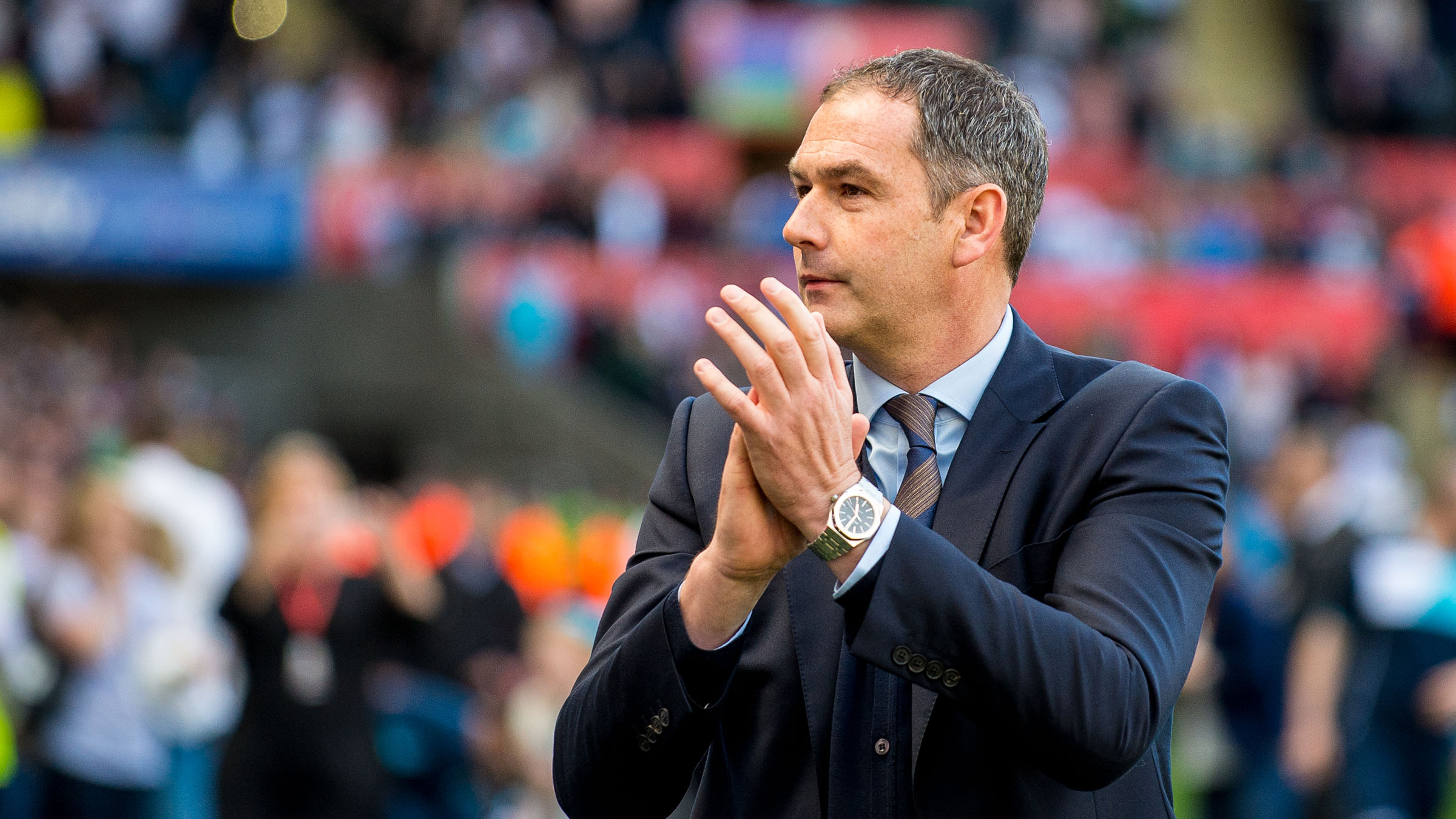 Paul Clement has insisted 17th place remains the target for Swansea City ahead of their trip to relegation rivals Hull City this weekend.

Bottom of the league and four points adrift of safety when Clement took over at the beginning of January, the Swans are up to 16th in the table and five points clear of the relegation places.
But the Swans head coach has brushed aside talk of aiming for anything more than survival this spring.
"Our target is to finish 17th or above, nothing more than that," Clement said.
"It's still very close at the bottom. At any time the gaps (between teams) can change, both for us and against us.
"Our focus, as it has been all along, is very much game to game, and that's the way it will stay right through until the end of the season.
"We had a very important victory against Burnley last weekend, when we responded very well to losing at Chelsea.
"Now we face Hull in what is clearly a very important game for both teams.
"We have a little advantage in the table over Hull at the moment, but it's not much.
"When you look at their statistics and ours - possession, shots, shots on target, crosses - the two teams are very similar, and I expect a very good game of football.

"We will go there trying to win the game. That is always our strategy. But if we can't win, it's very important not to lose because of the gap between us and them."

The Swans could put themselves nine points clear of Hull if they can back up the Burnley triumph with another success on Saturday.
But the Tigers have been in impressive form on their own patch - they have lost only one of their last eight home games - and have already beaten the Swans twice this season.
Hull won in the league at the Liberty back in August, then beat the Swans in the FA Cup in January.
"We played them in the cup in what was my first game and Marco Silva's first game," Clement added.
"I think Marco has done a very good job at Hull. They are a well-organised side and he has them playing good football.
"They lost at Leicester last weekend, but they probably played them at a bad time compared to when we did a few weeks ago.
"I watched their games against Arsenal and Chelsea and, although they lost them both, I though they did well in both.

"They had the edge over us in the cup - although it was a very tight game - but we are looking forward to coming up against them again and trying to come out on top this time."

Clement has ruled Kyle Naughton out of the trip to Humberside because of a minor hamstring injury, but hopes the right-back will be in contention for the trip to Bournemouth in nine days' time.
Ki Sung-Yueng and Jefferson Montero have both trained this week and could play some part.
"I will leave it until as late as possible to decide whether they will be involved," Clement said.
Clement on life at the Liberty
"I am happy here. I am happy that my team are playing well and getting some good results. I very much enjoy going into work every day.
"When you get results, it's a nice feeling. We have to keep working hard to make sure those results keep coming."
Clement on Jefferson Montero
"We brought in two players in January who can play out wide, so there's lots of competition in that position.
"But having lost Nathan Dyer, it's very good that Montero is coming back at this time. He is a player who can really make things happen on his day."
Clement on his trip to see Bayern Munich win at Arsenal
"I went into the dressing room before game. It was nice for me because when I left the club, we were on winter break, so I only got a chance to speak to people on the phone.
"That was my first opportunity to see everybody again. I wished them all the best for the game and they played very well."
Clement on Fernando Llorente
"He is proving to be a key player for us. He has five goals since I came in, and I think what's helping is that we are getting a good supply into the box.
"When you get crosses in, he is very, very good. Of the other players I have worked with, (Cristiano) Ronaldo is fantastic in the air, (Gareth) Bale is good, then you have John Terry and (Juande) Ramos who do well when they go forward.
"But Llorente is a wonderful header of the ball."
Clement on the Swans' January signings
"I think they have all had an impact. I was pleased with what Luciano Narsingh did in his first start last weekend.
"He tired in the second half but that's normal when you haven't played.
"Jordan Ayew has been very reliable when he's come on and Martin Olsson and Tom Carroll are both very good footballers who I am really pleased to have at the club.
"I think Martin, Tom and Gylfi Sigurdsson are coming up with a very nice combination down that left side."
First Team
Club
Paul Clement