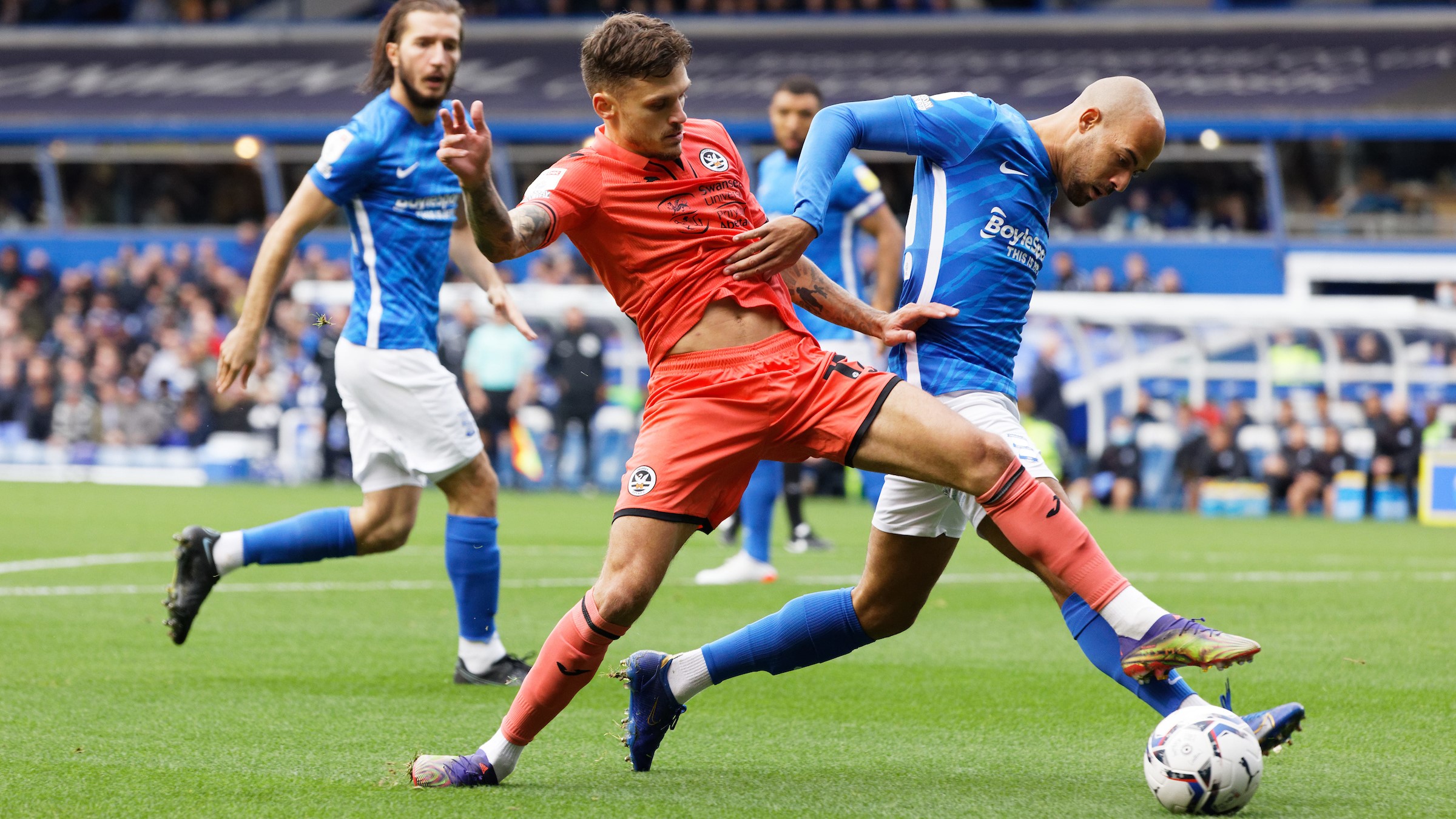 A late strike from substitute Riley McGree saw Swansea City slip to a 2-1 defeat against Birmingham at St Andrew’s.

The Swans dominated possession in a first half short on chances, with Olivier Ntcham shooting wide for the visitors and the home side having a goal ruled out for offside through Scott Hogan.

But Birmingham broke the deadlock straight after the restart as Troy Deeney finished well after good work from Tahith Chong.

The Swans rallied, however, and levelled with 13 minutes to play when substitute Michael Obafemi produced a fine finish after a great pass from Ryan Manning.

But the Blues struck the winner just five minutes later as McGree tapped into an empty net despite a fine stop from Ben Hamer.

Russell Martin made three changes to his starting line-up from the midweek win over West Brom.

Ryan Manning returned to defence in place of Ben Cabango, while Flynn Downes missed out with a tight hamstring and was replaced by Olivier Ntcham for the Frenchman’s first start since September 29.

Martin’s third change saw Jake Bidwell miss the trip to St Andrew’s following the birth of his baby boy, and the former QPR man was replaced by Joel Latibeaudiere.

But it was the home side who had the game’s first chance after just 10 minutes.

As the visitors looked to play out from the back, Ben Hamer’s pass found Matt Grimes and after his effort was slightly under hit, the ball fell to Blues midfielder Gary Gardner but his shot from 25 yards couldn’t fit the unguarded net.

However, the Swans responded well with plenty of possession and carved out a good opening of their own six minutes later.

Following a fine one-two between Ethan Laird and Olivier Ntcham on the right, the on-loan Manchester United full back cut it back for Ntcham who blazed his left-foot effort well wide.

The ball, however, was in the back of the net on 33 minutes but it was chalked off for offside.

The home side thought they had taken the lead as Tahith Chong’s right-wing cross was headed home from six yards by Scott Hogan but the linesman on the near side had his flag raised and the goal didn’t stand, much to the Swans’ relief.

And despite dominating possession for long periods of the opening half at St Andrew’s, the first period ended goalless.

Neither side made any changes at the interval, but within three minutes of the restart the hosts broke the deadlock.

After a heavy touch from Ethan Laird on the right flank, Birmingham moved forward in attack down their left and after Tahith Chong’s fine run and cross found Troy Deeney at the far post, the former Watford striker took a touch before firing beyond Hamer.

The home side should then have doubled their lead just moments later.

Possession was given up in the Swans half and after Deeney played Hogan in on goal, the flag stayed down but the striker took too long and Hamer did brilliantly to thwart the former Aston Villa man and keep Birmingham at bay.

Russell Martin made a couple of changes just before and after the hour mark, as Michael Obafemi replaced Korey Smith and Olivier Ntcham made way for Liam Walsh.

And it was Obafemi who had his first sight of goal 10 minutes after coming on, as Jamie Paterson’s through ball found the former Southampton man but he dragged his right-foot shot wide of the far post.

Martin then made his third and final change with 20 minutes to play as Liam Cullen replaced Joel Piroe.

The visitors continued to press but were indebted to Ben Hamer for denying the hosts a second as he tipped over Chong’s stinging effort from 25 yards.

But with 13 minutes to play, the Swans were rewarded with a fine equaliser.

Ryan Manning picked up the ball midway inside his own half and when his fine angled pass played in Obafemi on goal, the striker made no mistake as he lashed the ball under Matija Sarkic for his maiden goal for the club.

However, the Blues hit back just five minutes later as substitute Riley McGree got in on goal and despite a brilliant save from Hamer first time round, the striker capitalised on the rebound to slot into an empty net.

The visitors rallied as Liam Walsh fired over but it was the home side who held on to take all three points.