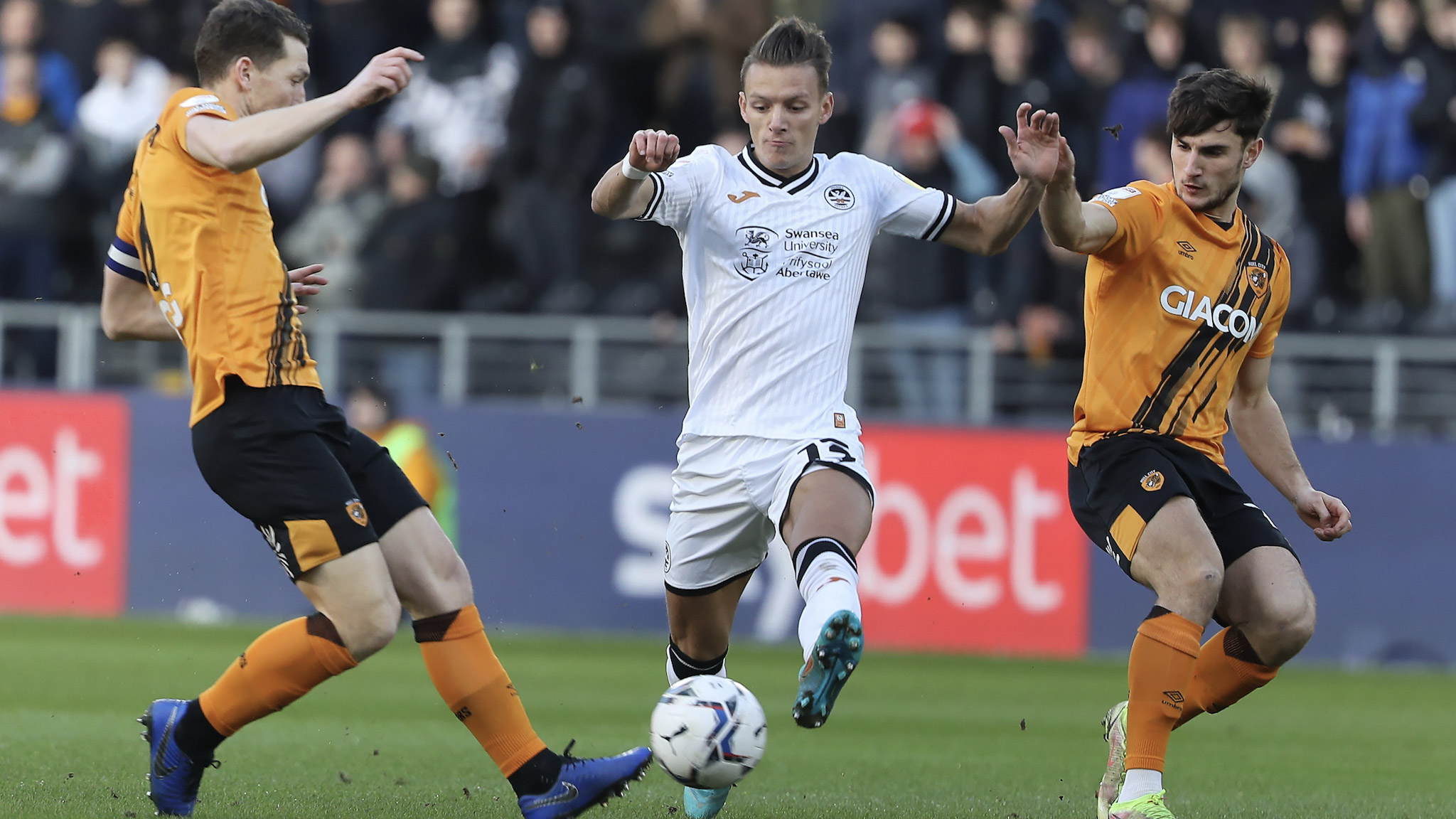 Swansea City suffered their first defeat in four games as they were beaten by Hull at the MKM Stadium.

First-half goals from Tom Eaves and Keane Lewis-Potter put the Tigers firmly in control on Humberside.

The visitors dominated for long spells in the second half and came close on numerous occasions as substitutes Michael Obafemi and Liam Walsh both struck the woodwork.

But despite their best efforts, it ended in defeat as the Swans suffered their first league reverse of the calendar year.

Russell Martin made one change to his starting line-up as Jay Fulton – who came off the bench during the midweek goalless draw with Queens Park Rangers – started in place of Flynn Downes, who missed out through suspension.

Ben Hamer continued in goal, with Ben Cabango, Kyle Naughton and Ryan Manning operating in a three-man defence in front of him.

Cyrus Christie and Joel Latibeaudiere continued at wing-back, while skipper Matt Grimes and Jay Fulton paired up in midfield, with Korey Smith and Hannes Wolf providing support to Joel Piroe in attack.

On the substitutes bench, Olivier Ntcham returned to the squad after missing the draw with QPR as the Swans went in search of a first away league win since November.

But it was the visitors who got off to the worst possible start on Humberside as Hull took the lead after just five minutes.

A flowing move down from right to left saw Sean McLoughlin release Brandon Fleming down the left-hand touchline and the defender delivered a dangerous ball into the box that was prodded home by Tom Eaves from six yards out at the near post.

It got worse for Swansea in the 17th minute, however, as the home side doubled their advantage.

After battling to win possession on the right, George Honeyman delivered a fantastic cross into the penalty area and Keane Lewis-Potter was left unmarked at the far post to volley past Ben Hamer to the delight of the home crowd.

The Swans had to wait until ten minutes before the break to have their first attempt on the Hull goal, Ryan Manning whipping a fine inswinging cross into the box but Hannes Wolf’s header was comfortably saved by Nathan Baxter.

Hull then thought they had grabbed a third just before the interval as Greg Docherty’s angled cross found Eaves, and after the striker bundled the ball home the referee blew his whistle for a foul on Manning.

The final action of the opening period saw Cyrus Christie get in down the left edge of the box and after he pulled it back for Joel Piroe, the Dutchman’s effort drifted wide of the left-hand upright.

Russell Martin made a double change at the break as Jay Fulton and Hannes Wolf made way for Michael Obafemi and Olivier Ntcham, as the Swans searched for a way back into the contest.

And it was Obafemi who had half chance to halve the deficit just four minutes after the restart as Joel Latibeaudiere’s teasing cross to the far post found the striker but his left-foot effort couldn’t find the target.

At the other end, Hull had a decent chance to make it 3-0 as Ryan Longman's cross from the right was parried away by Hamer straight to Jacob Greaves but the defender smashed his effort high and wide of goal.

But the Swans came even closer once more to pulling a goal back in the 58th minute as Manning's shot was blocked straight into the path of Obafemi who took a touch before firing an effort on the angle that cannoned back off the crossbar, before another effort from Manning was comfortably gathered by Baxter in the Hull goal.

The Swans' third and final change followed on 63 minutes as Korey Smith was replaced by Liam Walsh.

With 20 minutes to play the home side almost put the game to bed as Eaves found space on the right edge of the penalty area and drilled in a low cross that Hamer tried to gather, but as the ball cannoned off a defender it looked to be heading into the net but for Kyle Naughton's superb clearance off the line.

After Liam Walsh was fouled just outside the box, the midfielder picked himself up to dispatch the free-kick goalwards but he saw his effort bounce back off the upright, with Piroe firing the rebound wide of the right-hand post.

Ben Cabango was the next player to carve out an opening as he strode forward from defence, beating two defenders before shooting straight at Baxter from 20 yards out.

The visitors then thought they had pulled a goal back deep into stoppage time as Piroe turned home from close range but the flag was raised for offside.

But despite their best efforts, it ended in defeat as the Swans suffered their first league reverse of the calendar year.