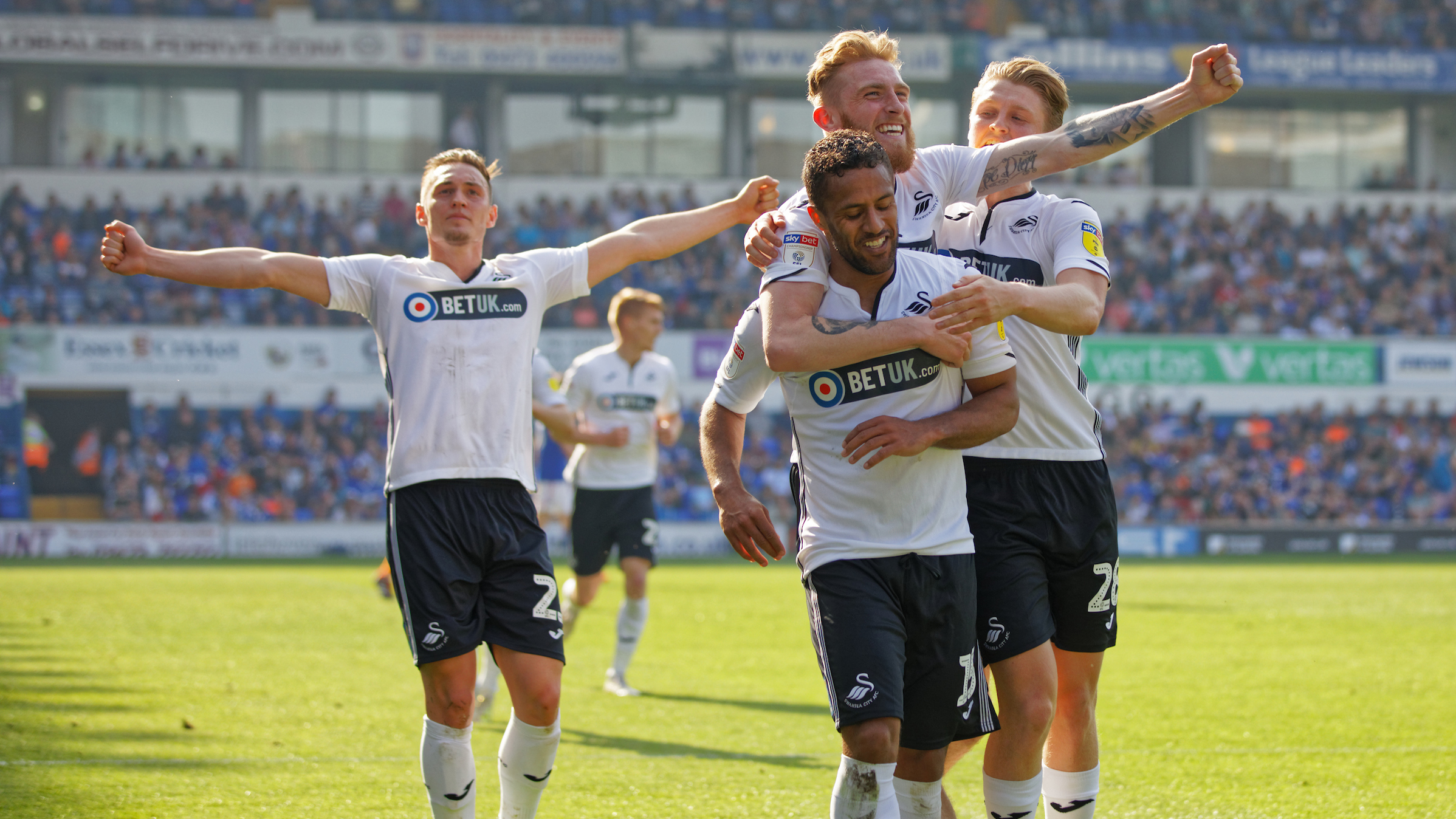 Wayne Routledge ended Swansea City’s run of seven consecutive away defeats as he netted a second-half winner at Portman Road.

In a sluggish end-of-season contest, Routledge was the first to react to the rebound when Dan James’ shot struck the post in the 57th minute to sink relegated Ipswich with a fine finish.

James and Routledge had both spurned chances in the first half, while George Byers was booked for simulation when the midfielder felt he had been fouled by Ipswich keeper Dean Gerken.

But it did not matter as Routledge's fourth goal of the season settled matters, and there was the boost of seeing Leroy Fer return after three months out with a hamstring injury.

The win moves the Swans up to 10th in the Championship table, and they are five points shy of the play-off places with three games to play.

Swans boss Graham Potter had made one change to the side that beat Rotherham 4-3 at the Liberty Stadium on Good Friday with Byers, an impressive second-half substitute that day, coming in for Barrie McKay.

McKay took his place on the bench alongside skipper Fer who made the matchday squad for the first time since picking up a hamstring injury in the draw at Birmingham at the end of January.

Swansea made a bright start in the the sunshine and should have taken the lead in the fifth minute when a long kick from Kristoffer Nordfeldt straight down the middle was missed by Toto Nsiala. James raced clear, but with just the keeper to beat he slipped his shot the wrong side of the upright.

The visitors continued to probe as Oli McBurnie and James were finding plenty of space to attack down the left flank.

McBurnie nearly played in Byers in the 16th minute with a neat pass before the midfielder went down under a challenge from Gerken. The travelling Jacks in the far corner appealed for a penalty, but the referee booked Byers for a debatable dive.

Jay Fulton followed him into the referee’s notebook soon after for a foul, before the Scottish midfielder forced Gerken into his first save of the afternoon with a long range effort after 25 minutes.

The Swans were dominating possession at this stage, but needed more quality and cutting edge in the final third to make the home side pay.

It nearly came on the half-hour when McBurnie again made good progress down the left. His pass inside the area saw Fulton curl an effort goalward only for Routledge to deflect it over the bar.

Ipswich did offer a response when a good build up down the right involving Edwards and Flynn Downes forced Carter-Vickers to concede the corner. Swansea’s defence looked in trouble from the delivery as Keane hit the post before Chalobah fired wide with 39 minutes gone.

Swansea responded immediately after as Routledge broke clear. He squared the ball to Connor Roberts on the edge of the area, but his shot was easily saved by Gerken as the chances finally started to open up at both ends.

Nsiala headed another Ipswich corner onto the roof of the net on the stroke of half-time as Ipswich stepped it up a gear. But neither side could make the breakthrough.

Neither side made any changes at the start of the second half which continued in the same slow pace as the first.

James nearly livened things up in the 54th minute when he cut in from the left to curl a low shot towards the far corner only for Gerken to push it away at the last minute as Routledge also prepared to pounce.

It prompted Swansea to step up the pace as James nearly set up McBurnie inside the six-yard box, the striker failing to connect cleanly with his shot, before the breakthrough finally arrived in the 57th minute.

Great battling from Fulton in the middle of the park set up James whose shot thundered against the upright. And, as the ball flew across the six yard box, Routledge was the first to react to blast the ball into the roof of the net for a deserved 1-0 lead.

With the game opening up, James was starting to see more of the ball now as he fired another effort over the bar before crossing for McBurnie to head over.

While Swansea looked comfortable, with just one goal separating the sides Ipswich knew they were still in it.

The equaliser nearly arrived in the 77th minute as they hit the visitors on the break. Substitute Collin Quaner raced clear in on goal, but Nordfeldt pulled off a great save to maintain his side’s slender lead.

And to round off a winning afternoon, Fer came off the bench with six minutes remaining to end his injury nightmare and secure Swansea’s fifth league win from their last six.