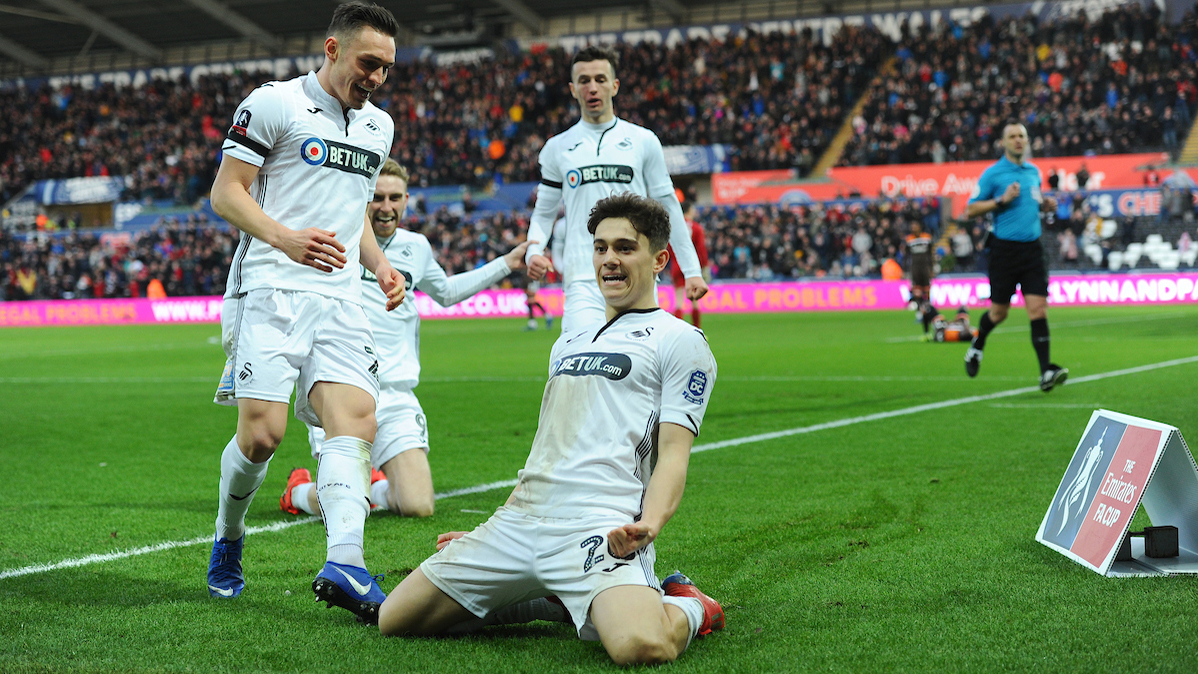 The Swans ended a run of four-straight defeats in all competitions with Dyer netting twice in the opening half, having last scored for the club in a league fixture against West Brom in August 2014.

Daniel James made the game safe with 12 minutes remaining to continue an excellent run of form at the Liberty.

Swansea have now lost just one of their last nine in SA1 in all competitions, winning six of them to tee up games here against Middlesbrough and Stoke in the coming days.

It also extended Swansea’s run of successive victories against Brentford to seven games.

Manager Potter had made two changes from the loss at Nottingham Forest with Wayne Routledge and Jay Fulton coming in for Oli McBurnie and Cameron Carter-Vickers, with Matt Grimes moving to full-back.

James had caused all manner of carnage in the Brentford defence in the FA Cup tie at the Liberty, and it took him just seconds to do so again on this occasion.

Mads Sorensen hesitated dealing with a long throw and, under pressure from the winger, he under-hit his pass back to keeper Luke Daniels.

James beat him to the ball and was bundled over, but it ran for the supporting Dyer to tap home after exactly 30 seconds of action.

The Swans could not have wished for a better start, and James so nearly doubled their lead in the ninth minute.

Jinking onto his right foot, a curling effort beat Daniels’ despairing dive only to be denied by the crossbar.

The Swans threatened again just past the 16-minute mark as James and Routledge combined smartly, only for the final ball to just be cut out as the Wales international threatened to go through.

Bersant Celina worked Daniels with a low left-footed strike seconds later and it was the Swans posing all the questions.

They were rarely troubled at the other end, although Fulton did make two crunching challenges as Sergi Canos prepared to pull the trigger from 20 yards.

The Swans’ play deserved a second and it arrived in the 34th minute via an unlikely route. Kristoffer Nordfeldt spotted Dyer running in behind the Bees defence from just inside the Swans half and his lovely long ball sent the winger clear.

Dyer took a moment to compose himself, and slid the ball through the legs of Daniels for his second of the night.

It was all Swansea and they nearly had a third in the final minute of the half after Celina was cynically hacked down by Neal Maupay.

The Kosovo international stepped up and bent his free-kick against the crossbar as the hosts ended the half firmly in control.

Brentford rallied early in the second half, but were soon on the back foot again as Celina and James started a sharp counter-attack that ended with the former curling over the bar.

Mike van der Hoorn did superbly to cut-out a dangerous Bees’ attack before play swept up the other end. Celina dug-out across that Routledge cushioned down to Dyer, but the winger poked wide to miss out on a hat-trick.

Said Benrahma fired over the bar before Celina missed a glorious chance to put the game to bed.

Roberts found the midfielder running clear from his own half, but his effort to dink the ball over Daniels rebounded off the keeper and was cleared.

Brentford boss Thomas Frank sent on Ollie Watkins and Emiliano Marcondes on the hour in an effort to turn the tide but it made little discernible difference.

Swansea made their own double change with 20 minutes remaining as McBurnie and Courtney Baker-Richardson replaced Celina and Dyer respectively and eight minutes later the game was safe.

Baker-Richardson pulled the ball back for McBurnie whose slice inadvertently teed up Roberts.

The full-back’s rasping effort hit the post, but it fell to James, who controlled and found the bottom corner.