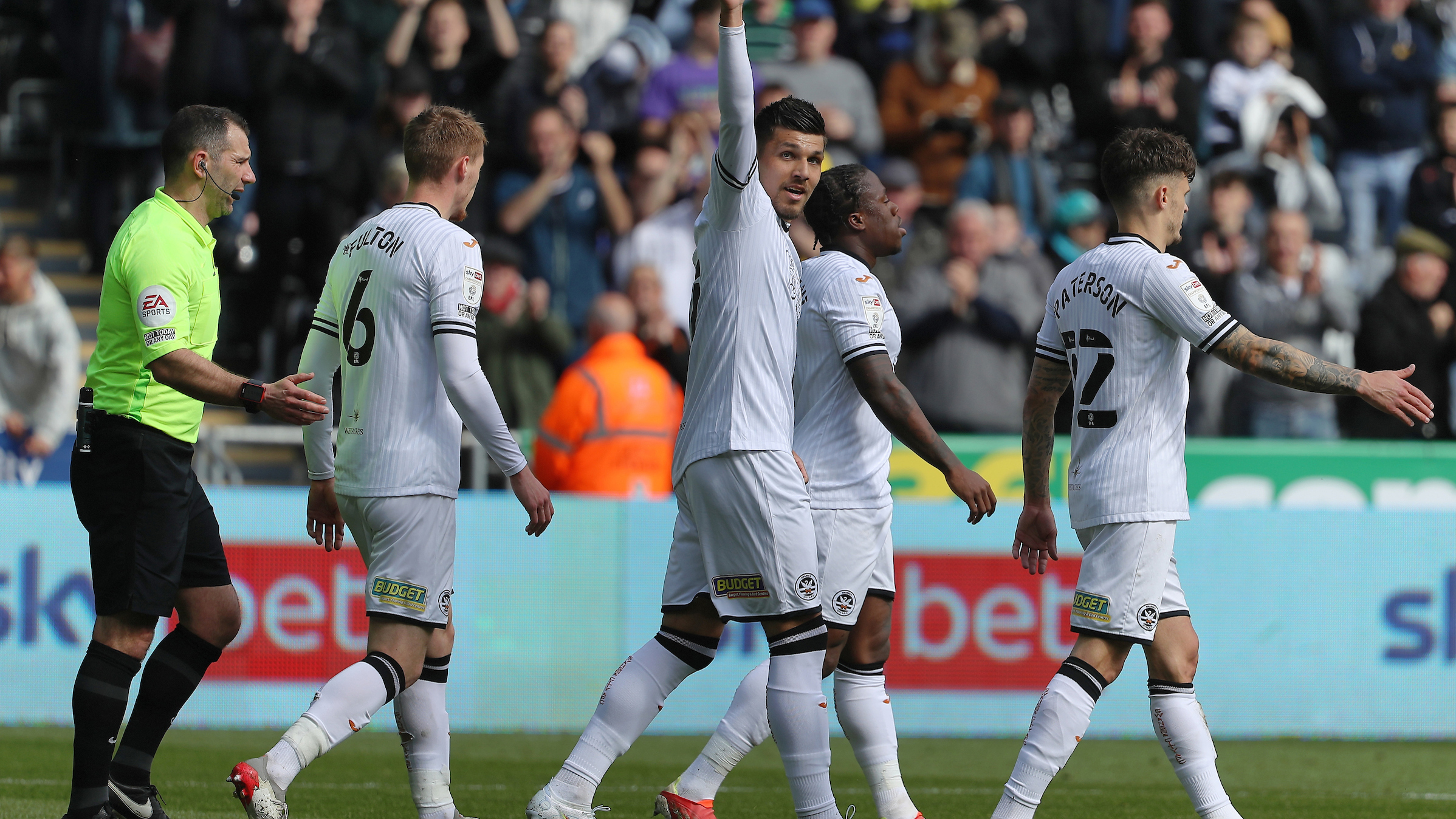 Joel Piroe’s first Swansea City brace sealed victory over Derby County as Russell Martin's side recorded their third win in a week at the Swansea.com Stadium.

The striker opened the scoring inside 10 minutes and had a second soon after with a pair of coolly taken side-footed finishes.

The visitors halved the deficit when Tom Lawrence converted from the penalty spot in the 22nd minute.

Both sides continued to create chances, but the Swans went closest to adding to their tally when Hannes Wolf hit the crossbar with 20 minutes of the match remaining.

Despite some late pressure from the Rams, the Swans held on to make it nine points in seven days as they strung together three wins in a row for the first time under head coach Martin.

Jamie Paterson returned to the starting line-up in the sole change from a midweek victory at Millwall. The attacking midfielder replaced Ryan Manning who dropped to the bench.

Flynn Downes – who had been a doubt in the match build up – did not make the matchday squad which gave Nathanael Ogbeta a place among the substitutes.

It was a fairly sloppy opening few minutes for both sides. Derby were wasteful with an early free-kick and corner which were conceded needlessly by the home side, while at the other end Paterson’s cross glanced off the head of veteran defender Curtis Davies and required a save from Ryan Allsop in the Rams’ goal.

Once Swansea found their stride however, they quickly found the back of the net.

Paterson and Wolf linked up well down the left and the latter’s cross was met by a late run into the box and coolly side-footed into the far corner by Piroe.

The Dutchman had highlighted his desire to hit 20 for the season, and reaching that target ended up being just oh so easy as eight minutes later he was on target again.

It was more good play from the Swans in the build-up. They worked the ball into Michael Obafemi, the striker was dispossessed by Davies but his clearance fell to Piroe who slotted home with a minimum of fuss to double the score.

And he was quickly in again - same position, same body shape – but the visitors had seemingly learned their lesson with Davies across to intercept.

The home side weren’t going to have things all their own way though and in the 21st minute Luke Plange beat the offside trap and was brought down in the box by Andy Fisher, leaving referee Tim Robinson to point to the spot.

Rams’ skipper Lawrence went for power and while Fisher got a hand to it, he wasn’t able to keep it out.

Three minutes later, what appeared to be a foul on Paterson by visiting keeper Allsop 25 yards from his own goal line was waved away by the referee to the anger of the Jack Army.

Paterson had initially done really well, pinching the ball off the toes of the shot-stopper and knocking it beyond him to set up what would surely have been a tap in. Had the foul been given, a red card would surely have followed.

Piroe blasted over just after the half-hour mark. A brilliant through ball found the run of Paterson off the shoulder of the defence, he found Wolf, who attempted to pick out Obafemi.

The striker was under pressure and could only help it on to Piroe, who was unable to make it a third side-footed finish in under 30 minutes.

The Swans created a few more half-chances at the end of the opening period. Ben Cabango headed over from a corner and Cyrus Christie pounced on a miskick by Lee Buchanan, shifting the ball onto his left foot but firing wide of the far post.

At the other end, Malcolm Ebiowei went down in the Swans penalty area under the challenge of Joel Latibeaudiere, but the appeals were tame.

Manager Wayne Rooney opted for a change at half-time with Buchanan replaced by Festy Ebosele.

The visitors created the first chance in under a minute, Ebiowei curling a right-footed effort just beyond the far post.

The Swans hit back 10 minutes later, with Wolf cutting in from the left and drawing a save from Allsop.

Jay Fulton could not keep an ambitious volley down as he attempted to direct a cleared corner-kick back on target from the edge of his box.

With just under an hour played, Paterson was replaced by Olivier Ntcham and minutes after being introduced, his deflected effort rolled agonisingly wide of the far post. It would not have counted though as, after some deliberation, the officials deemed Obafemi to be stood in an offside position.

With Paterson withdrawn, Wolf began to exert his influence on the game and he was next to go close for the Swans.

It was a sensational solo run from the young Austrian who rode the challenges of three Rams players before picking out Obafemi with a lovely weighted pass. The striker’s first touch sat the defender down and he picked out Wolf at the edge of the box, but Wolf's lifted effort clattered against the crossbar.

Wolf was soon involved again, this time his cutback was skewed wide by Ntcham.

A few more chances came and went – Piroe stepped over a squared ball leaving it for a runner that never arrived, and Christie and Korey Smith, who replaced Piroe, were on different wavelengths after they tried to work an opportunity.

Throwing caution to the wind – and attacking players onto the pitch - Derby created a few late chances.

Krystian Bielik’s header back across goal with five minutes remaining had Fisher scrambling, but it was off target and Latibeaudiere was able to hook it clear, while Lawrence blazed over from the edge of the box with two minutes remaining and Allsop was pushed up for a late corner and went closest to getting his head on the delivery.

A scramble in the Swans box during the three minutes of added time ended with bodies down in the area, but all appeals for a penalty were waved away as victory was claimed.