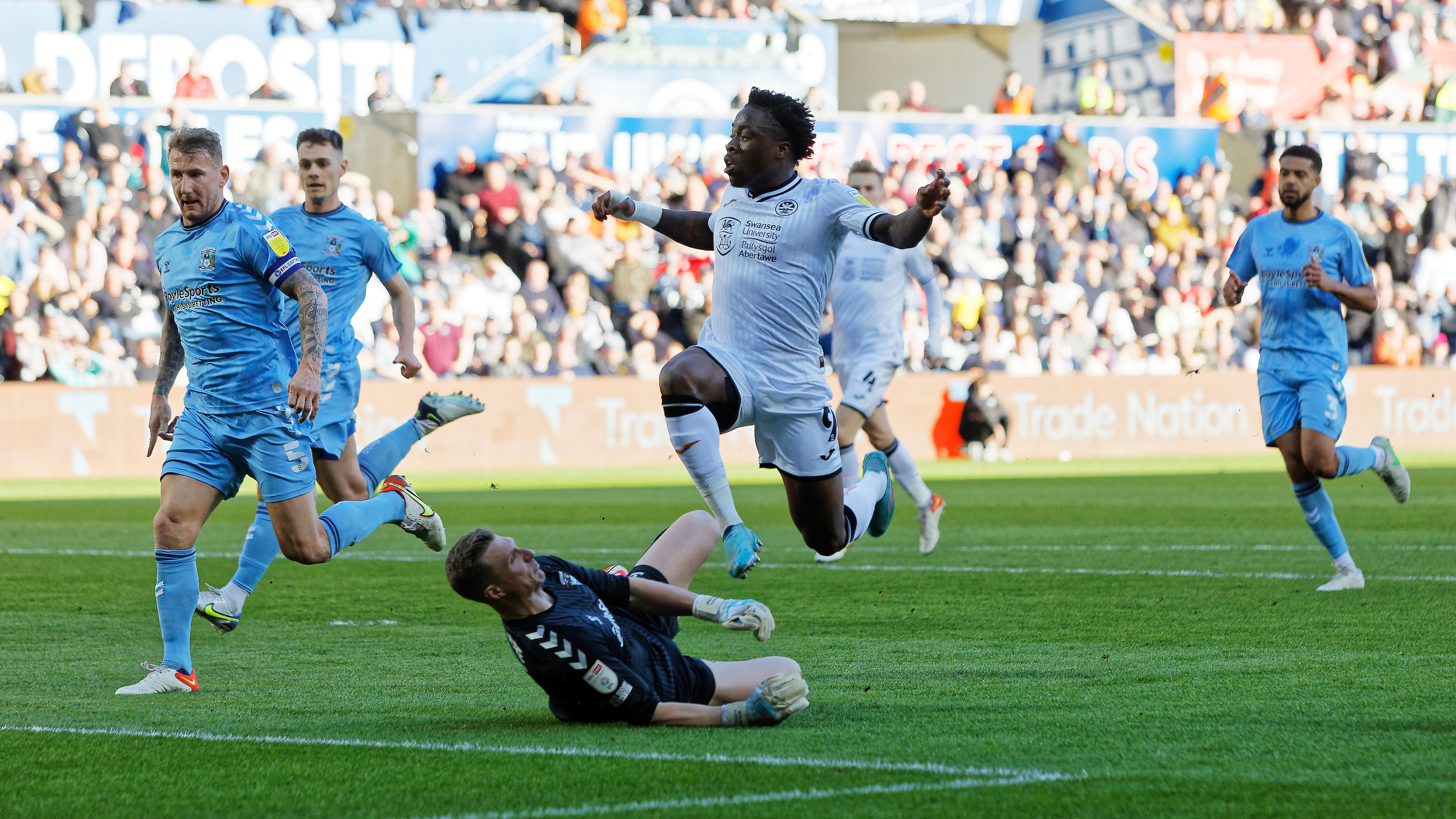 Michael Obafemi stole the show as Swansea City made it three home wins in a row with victory over Coventry at the Swansea.com Stadium.

The in-form striker set up the first when he picked out Jamie Paterson with a delightful first time ball, before netting either side of half time to create a comfortable afternoon for Russell Martin's men.

The Swans dominated the first half, and were clinical with their finishing with Paterson putting his side ahead with the first real chance of the half and Obafemi doubling the lead with the second. Coventry almost got one back before the break when a misplaced goal kick was headed back into the path of Viktor Gyokeres, but Andy Fisher made a great stop to deny him.

The Swans’ lead was extended right after half time with Matt Grimes winning the ball back and finding Obafemi, who showed real composure to make it 3-0.

The visitors arguably had the better of the second half, with Fisher making a couple of key saves and plenty of important defensive blocks from the Swansea defence, but Gustavo Hamer’s fine finish in the 84th minute was only a consolation.

Russell Martin made one change to the side who defeated West Bromwich Albion on Monday evening. Hannes Wolf missed out due to testing positive for Covid-19, which meant Korey Smith lined up at left wing back. This also freed up a space on the bench for 18-year-old academy product Cameron Congreve – the first time the attacking midfielder had been included in a senior matchday squad

The opening phase of the game provided very few chances for either team; a hopeful cross from the right by Todd Kane - which was straight into the arms of Andy Fisher - was the best chance for the visitors, while at the other end Obafemi was inches from connecting with Paterson’s free-kick.

The Swans’ dominance in possession soon bore fruit though as Paterson gave the home side the lead in the 12th minute.

It was a very neat one-two between him and Smith which released the latter into space down the left wing. His cross found Obafemi who played the ball first time to find the continued run of Paterson in behind the Sky Blues’ defence. It was the first real piece of quality from either team in the match and Paterson produced a finish to match as he buried it left-footed just inside the far post.

It took 20 minutes for Jake Bidwell – who has been one of Coventry’s best attacking outlets this season – to swing a cross in from the left, but it was high and looping and Fisher was always favourite to claim it. While Hamer’s hopeful effort from 25-yards ballooned up into the stands.

At the other end, forward balls into Obafemi weren’t troubling Coventry – who boast a pretty good defensive record – with a combination of Michael Rose, Jake Clarke-Salter and McFadzean cutting out the danger before it could really start.

However, they could do nothing when Obafemi doubled the lead just before half-time.

Fisher picked out Flynn Downes with a perfect pass into the middle of the park, the midfielder showing real directness as he drove at the Coventry defence, before playing a perfectly weighted pass into Obafemi.

The striker’s first touch initially looked a little heavy, but he beat visiting shot-stopper Simon Moore to the ball and slotted coolly beneath the ‘keeper to make it three goals in three home matches for the Swansea number nine.

Swans very nearly conceded at the end of the half as Fisher’s skewed goal kick was headed back into his area and picked up by Coventry’s top scorer Viktor Gyokeres, but the keeper immediately atoned for the error by racing off his line and denying what had looked a certain goal.

But the hosts started the second half on the front foot and Obafemi soon made it 3-0 straight after the break. Matt Grimes picked the pocket of Ben Sheaf in the middle of the park and played a perfectly weighted pass to put the striker one-on-one. He made no mistake, finishing coolly across Moore.

Then came a spell of pressure for the visitors as Kane started to cause problems down Swans left. The best chance in this period came when he cut the ball back to Gyorkeres at the edge of the box. The Swedish striker looked certain to score, but Kyle Naughton put in a fantastic challenge to deny him.

Mark Robins rang the changes just after the hour mark with Bidwell and Gyorkeres replaced by Matty Godden and Martyn Waghorn.

Both substitutes went close for the visitors. Cabango somehow wrapped his foot around to take the ball off the toes of Sheaf as he looked to shoot from close range but the rebound fell to Godden who saw his effort well-saved by Fisher. Waghorn then headed over from the resulting corner.

McFadzean headed wide from close range and Godden went close for a second time as the visitors pressed for an opening.

Coventry did get one back when Hamer curled a side-footed effort inside the far post with just over five minutes remaining, but it was to be a consolation as the Swans made it back-to-back wins.

Swansea City Ladies began 2023 with a win as goals from Katy Hosford and Jess Williams earned them victory at Pontypridd United Women.

Swansea City bowed out of the FA Cup as Bristol City edged a hard-fought third-round replay after extra-time at the Swansea.com Stadium.

Swansea City recorded their first win of 2023 as goals from Joel Piroe, Liam Cullen and Ollie Cooper sealed victory over 10-man Sunderland at the Stadium of Light.