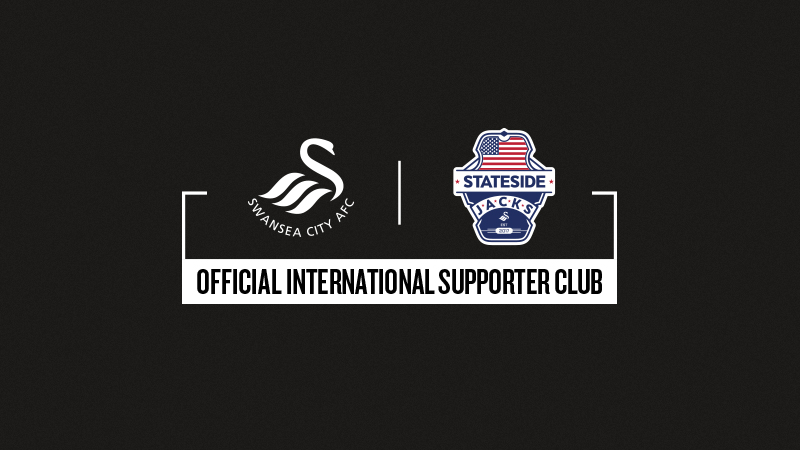 The club’s seven years in the Premier League saw its international support swell all around the world – and nowhere more than in the United States.

As a result, all the regional Swans supporters' groups in the United States have now come together to form an official Stateside Jacks national supporters' club.

The Stateside Jacks will form the first part of a new section on our official website where we will be adding various selected supporter clubs from around the world, including those closer to home such as the Ceredigion Jacks @CeredigionJacks, Pembrokeshire Jacks @pembsjacks, Jacs Y Gogledd (North Wales) @JacsyGogledd and Port Talbot and Exiled Swans @PortSwans.

Marc Padro and Jonathan Notman, who co-founded the Stateside Jacks, explained the story behind the supporters' club.

“It all started back in 2017 when the Swans came to the States for their pre-season tour. Various regional Swansea City fan clubs from around the United States combined forces to create the Stateside Jacks, a ragtag group of misfit fans with an unspeakable passion for their Welsh football club," they said.

“With regional supporters’ groups based across the United States, each brings their own unique identity to Swansea fandom, from New York City to San Diego. We see the Stateside Jacks as our unique opportunity to bring together a large group of national fans with the aim of creating a common bond for the club they support."

“It’s great to see the emergence of so many supporter groups across the United States and we hope this relationship will provide a closer link to the club they feel so passionately about.”

You can find out more about the Stateside Jacks at www.statesidejacks.com or on the club’s official supporter page HERE. You’ll also find details on how your supporter group can sign up and where your nearest fan group is situated.