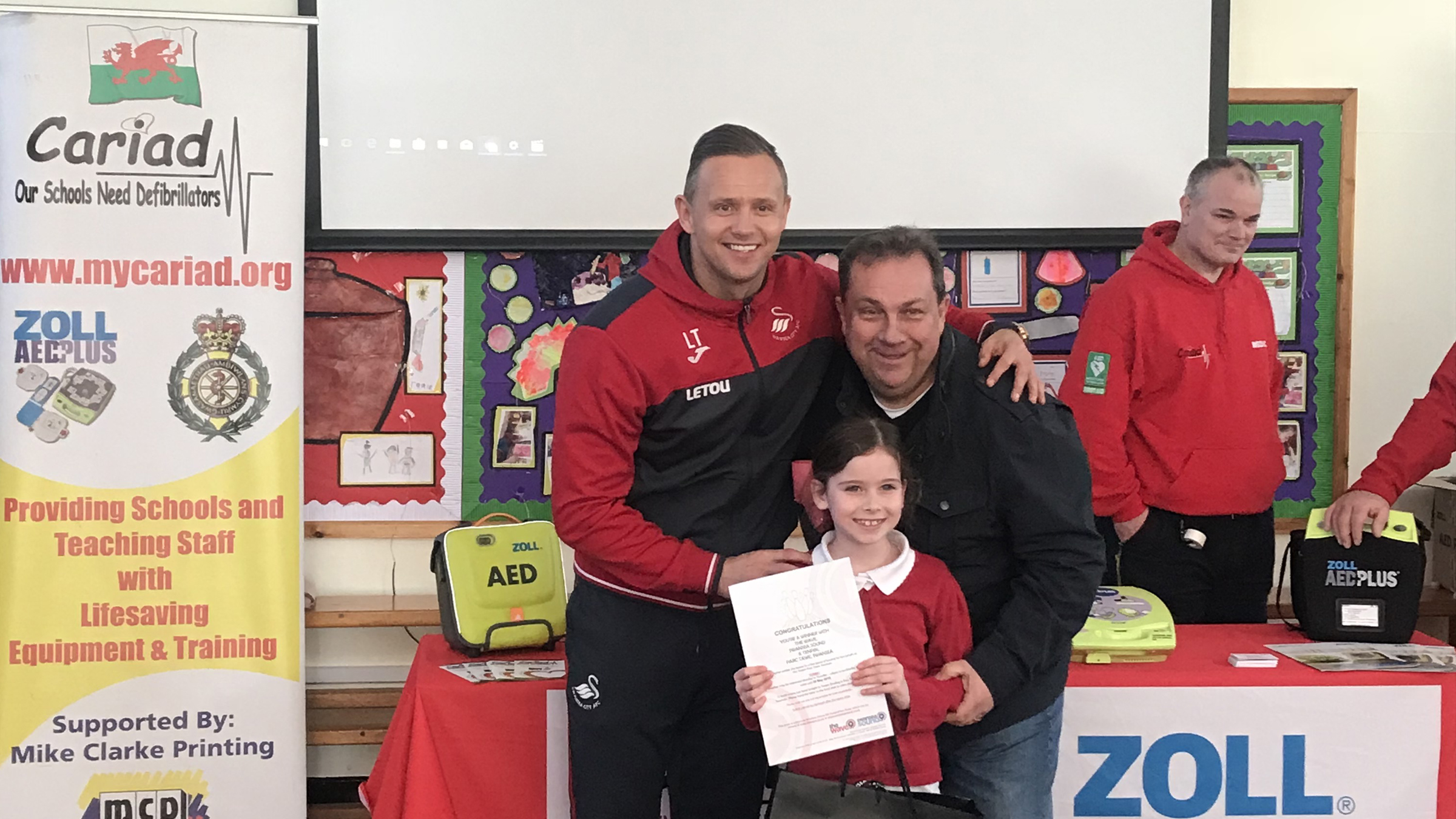 ​​​​​​​After the success of Swansea City’s defibrillator pledge in memory of Mitchell Joseph, the club has got on board with The Wave’s ‘Keep the Beat’ campaign.

In partnership with Swansea Sound and Cariad, local radio station The Wave have launched Keep The Beat, which aims to increase the awareness of defibrillators, and how to use them, in local schools.

The roadshows at the various schools are hosted by The Wave and Swansea Sound presenters Siany and Kevin Johns MBE, affording the children of each school the opportunity to participate in a live link on air to each of the stations.

Co-founder of Cariad Anthony Hamilton-Shaw follows then conducts a session on CPR and defibrillator use.

The presenters finish the roadshow by singing ‘Defib To Keep The Beat’ – an interactive method of engaging the children in how to conduct CPR and use defibrillators.

The Wave’s Kathryn Lane said: “So far we’ve been to a mixture of primary and comprehensive schools across South Wales, providing training to put children at ease and show them how they can make a difference.

“Initially this is a month-long campaign, but with the fantastic response of the public so far, it has potential to continue.

“The Swans have been fantastic. From the word go, we’ve worked together to create awareness. I hope our relationship can continue and we can help as many people as possible.

“Their work on the Mitchell Joseph campaign just shows the strength of the community – how one devastating incident has sparked the generosity of the public.”

Mitchell, 33, tragically passed away on January 14, after suffering a heart attack at Mynydd Newydd Playing Fields while playing for Swansea Senior League side St Josephs.

Friends, family and team-mates of Mitchell conducted a bucket collection around the Liberty Stadium before the Swans’ Premier League victory over Liverpool in January to raise funds for Mitchell’s family and fiancée Laura.

An outstanding £10,595 was donated by Swans and Liverpool supporters.

The Swans matched the amount raised and used the funds to purchase lifesaving defibrillators, which deliver a dose of electric current to the heart.

The pledge was extended as the Swans committed to adding another defibrillator for every goal Carvalhal’s Swans score until the end of the season.

The club have so far purchased 36 defibrillators which have been distributed around the main playing fields in the Swansea League, and are being maintained by Cariad.

“Cariad is a charity providing lifesaving training and defibrillators to schools and communities across Wales,” explained Hamilton-Shaw.

“We hold on average five training sessions per week and distribute around 10 defibrillators per week.

“The Keep The Beat Campaign intends to get young children to take the training they learn with us home to their families.

“We encourage them not to be afraid and to have the confidence to get a defibrillator if they are faced with someone who isn’t breathing.

“Lee Trundle has been present at the schools during this campaign to show the support of the Swans, whilst encouraging children to participate and having a go himself!

“I can’t praise the club enough. This alongside their pledge for Mitchell Joseph shows how they are encouraging communities to come together and these defibrillators are now there to save lives.”

Cariad provide free training on the use of defibrillators in local schools, and maintain defibrillators around local communities, so that they’re always ready to use. For more information, contact sheri@mycariad.org