There are a number of things which will differ from the usual Championship matchday, so we have created a guide for supporters and we urge those attending to review the below information about ticketing, stadium access and parking before travelling.

Season Ticket Holders who have purchased their seat

Season ticket holder who have purchased a different seat

Season ticket holders who have purchased a seat, which is different from their usual seat or under a different customer number will receive a print at home ticket.

All tickets which were purchased as print at home tickets before 9.30am on January 16 have been emailed to supporters.

The ticket will be sent to you via a ‘donotreply@ticketmaster.co.uk’ email address and if you have not received this, we urge you to check your spam or junk folders before contacting the ticket office.

If your Swans Club Account and ticketing account are linked correctly, you should also be able to access a digital ticket through the Swansea City App.

When on the app, visit the ‘Jacks’ tab and click ‘View matchday tickets’. Your ticket should appear on this page.

If you have not received your ticket, you should contact the ticket office by email (ticketing@swanseacity.com) or phone (01792 616400 and select option 1).

The ticket office is also open for in-person queries during the following times:

Ticket holders in the East Stand should be aware of an alternative route to access their seats for this fixture.

Access is either by walking around the South Stand, or by taking the route identified on the map below in green.

Guests should be aware that their seasonal hospitality accreditation will not be valid for this fixture.

Seasonal guests MUST have requested a ticket before midnight on Thursday, January 12 to access this fixture.

All guests were contacted via email with details relating to their package and tickets have been posted to those guests who opted to receive their tickets via this method.

Hospitality guests who requested for tickets to be collected can either collect from the Swansea City ticket office between 9am and 5pm on January 16), or two hours prior to kick-off from the hospitality collection office on the ground floor of the stadium on match day.

Please ensure you and your respective guests have the necessary tickets and wristbands, as aforementioned seasonal passes and lanyards will not be valid for this fixture

If you have any queries, please contact the team directly on 01792 616628 or email hospitality@swanseacity.com.

Doors will open two hours prior to kick off as usual (5.45pm for this fixture).

Certain packages are entitled to a ticket and lounge access only, however guests should be aware that a pay bar and options to purchase food will be available on the evening.

Tickets for this fixture are still available to purchase, and the quickest and easiest way to do so, is online. Click HERE to buy tickets.

Tickets can be accessed in a number of ways: print at home, collection from the ticket office, or as an in-app digital ticket.

The ticket office is open until 5pm today for any supporter queries.

You can also speak to the club’s ticket office staff by calling 01792 616400 and selecting option one.

Tickets are also available to purchase on matchday from the ticket office, however, the club strongly recommends that supporters purchase tickets as early as possible to avoid any delays on matchday.

Any supporters looking to collect matchday tickets will be able to do so from the ticket office only.

Supporters are reminded that they can also access a digital copy of their season ticket or matchday ticket via the Swansea City app.

To use the in-app ticketing service, supporters should ensure their app is up to date and that they are running the latest version to ensure the correct tickets are pulling through. This may involve visiting your relevant app store.

Ticket holders will need to use their Swansea Club Account to access their ticket and ensure it is linked to the correct season ticket account. For more information on this and a walkthrough of the steps needed, please visit our FAQs.

Swansea City would like to remind supporters who wish to use this service that it is the responsibility of ticket holders to check that their in-app ticket is visible before they travel to the Swansea.com Stadium. You will need internet connection for your season ticket to appear and we highly recommend adding your ticket to your smartphone wallet if possible.

Supporters are reminded that season tickets and print at home tickets will also remain fully operational, and ticket holders are welcome to use whichever option is most suitable for them.

More ahead of this match...

We have created a Travelling to the Swansea.com Stadium guide to help make your journey to SA1 as simple as possible. You can find that information here.

Public parking is available at the Park and Walk site across the road from the Swansea.com Stadium at a charge of £5 per car.

Please see the road closures map below for up to an hour post-match. 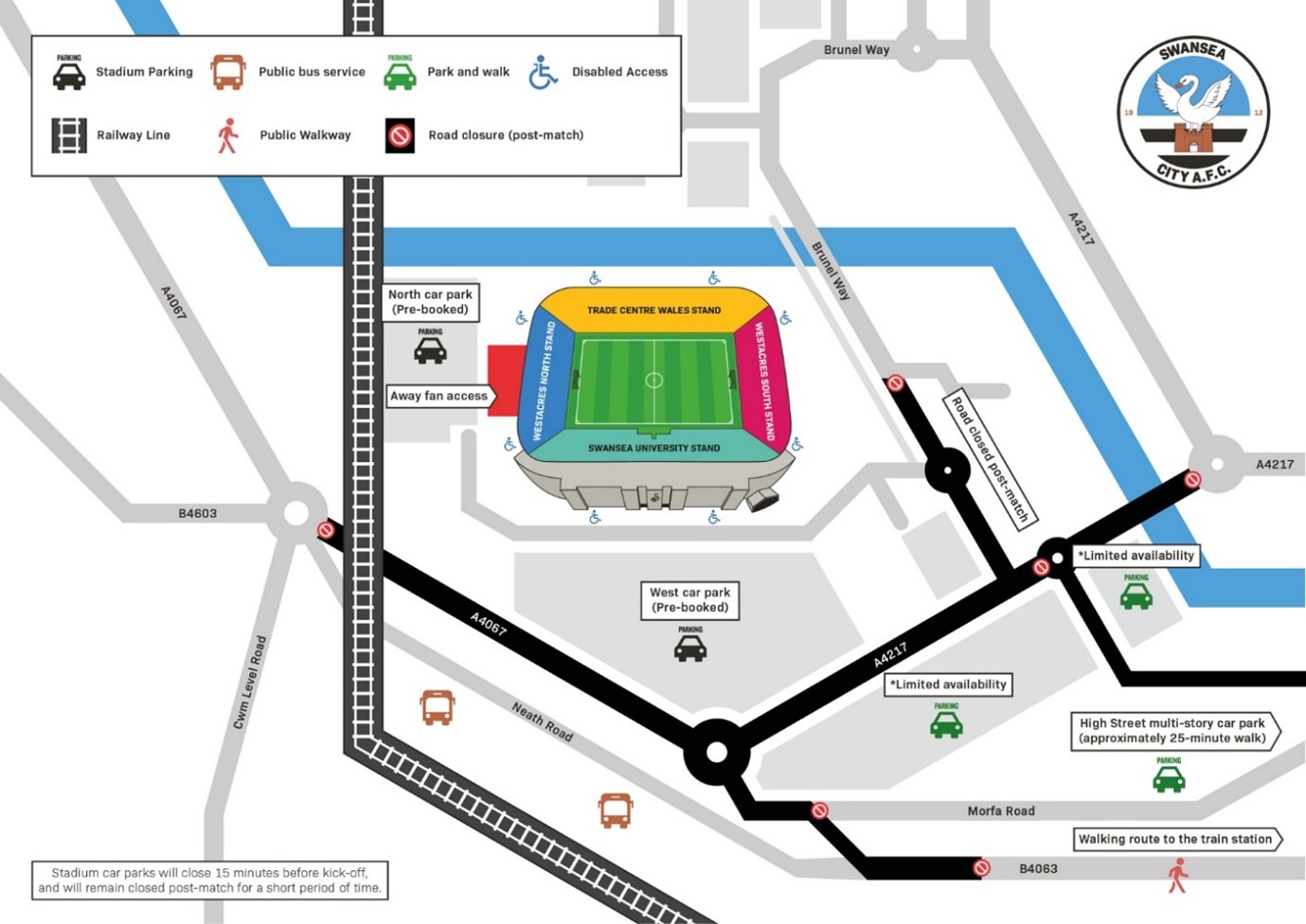 The club shop will be open between 1pm and 8pm on match day, with supporters able to take advantage of our Trundle Tuesday deal, valid for this week only in-store and online.

The Riverside Lounge will be open for all match ticket holders from two hours before kick-off.

Supporters can take advantage of our cheapest prices on food and beverages up until 45 minutes before kick-off.

As a club, we want the Swansea.com Stadium to be an inclusive and enjoyable environment for all supporters.

We have introduced an inclusion room at the Swansea.com Stadium which will be available to supporters who may require a quiet space at home matches during the 2022-23 season, while the Disabled Supporters’ Association (DSA) has presented the club with new ear defenders for supporters who can find loud noises challenging.

This is part of our ongoing commitment remain a wholly inclusive and welcoming club for everyone.

For more information about accessible facilities in the stadium, click here.

These actions will target activity such as entering the pitch without permission, carrying or using smoke bombs or pyrotechnics and throwing objects - as well as drug use and discriminatory behaviour.

As a club we have a zero-tolerance approach to discrimination of all forms. We will always be unwavering in our support of our players, staff, supporters and the community that we proudly represent, and we are united as a club on the fight against discrimination.

If any supporter is reported to – and subsequently proven guilty – of racial discrimination either at the Swansea.com Stadium or on our travels, then they will face a lifetime ban from stadiums and we will work closely with the authorities on the issue.

As a club, we have a zero tolerance approach to the throwing of objects on to the field of play. We will take a firm stance against any supporter(s) who is found to be guilty of such an offence either at the Swansea.com Stadium or when we play away from home.

The Swansea.com Stadium is an all-seater stadium. In the interest of everyone’s safety, we ask that all fans abide by this and thank you for your support.