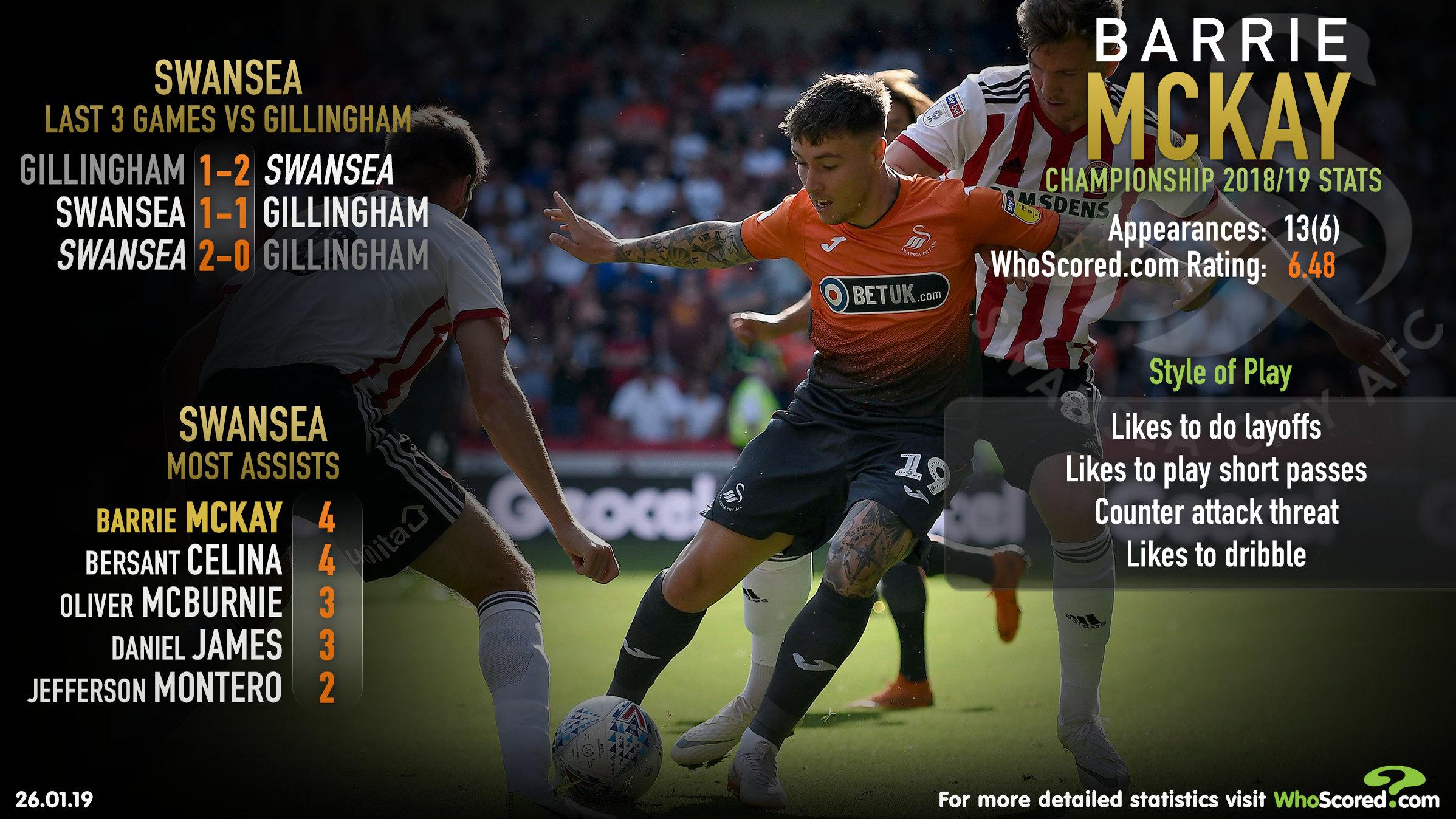 Football stats experts WhoScored.com take a closer look at the attributes of Swansea City winger Barrie McKay as Graham Potter's men look to make it four wins in a row against QPR this afternoon (3pm).

Another home game, another three points. Swansea put in a mature performance in midweek to beat Stoke 3-1 as they made it three successive league wins to improve their outside chances of securing a play-off finish.

The Swans remain nine points outside the top six with six matches still to play and they need to continue this fine winning run if they are to gatecrash the play-offs.

Taking their fine home form on the road is of paramount importance for a late promotion push and they couldn’t have more hospitable opponents right now than QPR.

The west London side remain without a manager following Steve McClaren’s dismissal and a run of seven matches without a win is the longest current winless streak in the Championship.

Only three teams have earned fewer home points than QPR (27) have at Loftus Road this season and with the Rs in disarray this is a big opportunity for Swansea.

The Swans have a fine recent record with QPR, too, winning four of the last five clashes between the two teams, with the other ending in a draw, so another three points is very much a possibility if they can continue their strong performances.

While manager Graham Potter may be hesitant to make wholesale changes to an XI that dispatched nine-man Stoke with ease, to keep the squad fresh and competitive he may alter his side for today’s trip to the capital.

Indeed, this may benefit winger Barrie McKay, who came off the bench in midweek to provide the assist for Oli McBurnie’s late strike to guarantee all three points.

It means only Bersant Celina (6) has provided more assists than McKay (5) of all Swansea players in the Championship this season, they have seven apiece in all competitions.

Having earned a WhoScored.com rating of 7.19 off the bench on Tuesday night, the Scot will be looking to add to his six goals and assists this term at QPR. Swansea may also benefit from McKay’s impressive performances on the road this term, with the summer arrival scoring one and assisting three from his 17 away league outings so far.

McKay’s versatility may be one of his qualities, yet it’s his trickery from out wide that could help Swansea to put QPR on the back foot at Loftus Road. One of QPR’s statistically calculated WhoScored.com weaknesses is ‘defending against skilful players’ and this should play into the 24-year-old’s hands.

Indeed, McKay is averaging 1.2 successful dribbles per 90 this season, one of the better returns of all Swansea players and, when attacking from the flanks, QPR may well struggle to keep the Scotland international in check.

Should Potter rotate, then it’s likely McKay would start from the left, in which case he could come up against young Darnell Furlong, with the 23-year-old deployed at right-back in recent meetings with Norwich and Millwall. Furlong, though, has developed a statistically calculated WhoScored.com weakness of ‘tackling’ and it may impact QPR negatively as they aim to correct their woeful form.

McKay made an impact from the bench in midweek and the aim now will be to continue his good away form in west London. If he does start, another solid performance is in the offing for the Scot, who has the means to really test the Rs defence this afternoon.