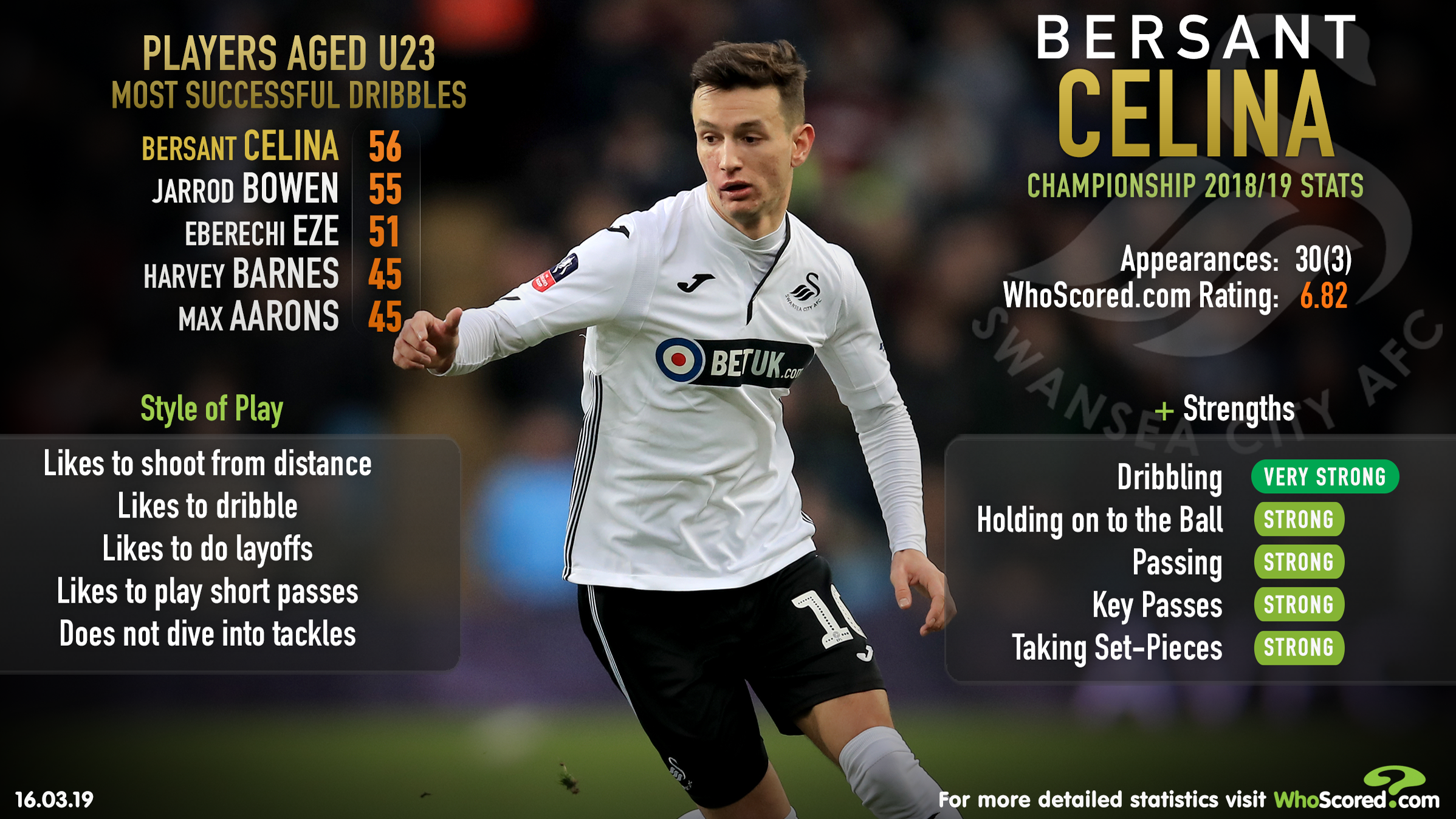 Football stats experts WhoScored.com take a closer look at the form of Bersant Celina as Swansea City prepare to take on his former club Manchester City this evening (5.20pm).

With the international break right around the corner, there’s the small matter of an FA Cup quarter-final tie to navigate for Swansea.

However, with the games coming thick and fast, the fixtures don’t let up for the Swans, who are aiming to spring an FA Cup upset when they welcome Manchester City to the Liberty Stadium this evening.

City have been in rampant form of late, though, having won their last 10 in all competitions and come into this clash on the back of a 7-0 thumping of Schalke to ease into the quarter-finals of the Champions League. The beauty of the FA Cup, though, is that there is always a chance for a sting in the tail and Swansea will be looking to secure their semi-final spot at City’s expense today.

Swansea will look to make home advantage count in their bid to upset the odds and they at least boast a fine recent record at the Liberty Stadium. They are unbeaten in their last seven in south Wales, winning five, and it could be that a former face comes back to haunt City in their pursuit of the quadruple.

Bersant Celina secured a permanent move to Swansea over the summer, bringing to an end a six-year spell with City in the process. The Swans have benefited immensely from his impact with his WhoScored.com rating (6.82) solid for Graham Potter’s side.

There was a reason City plucked him from Stromsgodset back in 2012 and he is living up to the promise shown from a young age to consolidate a regular spot in the Swansea XI.

He can prove his former employers were wrong to cash in on him today and, in the process, play a significant role in getting Swansea to Wembley. He has five goals and four assists to his name in the Championship this season and, impressively, has two goals in three FA Cup outings having scored in successive 4-1 wins over Gillingham and Brentford.

His trickery on the ball is arguably his best trait and it’s this quality that can help put Swansea on the front foot when they are in possession. Indeed, of those under the age of 23, Celina has completed more dribbles (56) than any other player in the Championship this season to reinforce a statistically calculated WhoScored.com strength of ‘dribbling’.

Provided he can routinely ghost his way past opponents, then City will need to be wary of the creative side of his game in the final third.

Another of Celina’s statistically calculated WhoScored.com strengths is ‘key passes’, which should bode well for Swansea.

One of City’s four WhoScored.com weaknesses happens to be ‘stopping opponents from creating chances’ and while they have been impressive, they have their shaky moments at the back too and it’s vital that Swansea capitalise if they are to book their place in the next round of the FA Cup.

It could be that Potter uses Celina from the left, in which case he’ll come up against right-back Danilo who, while not a regular starter under Pep Guardiola, has proven a handy stand-in when called upon.

The Brazilian has gained a commendable WhoScored.com rating of 7.21 in the Premier League this season so, while it could be that City are under strength, they aren’t to be underestimated, but then neither are Swansea.

Wigan last season proved how vulnerable City can be in the FA Cup and if Swansea can draw on inspiration from the Latics’ 1-0 home win, then there is no reason why the Swans can’t book a semi-final spot, with Celina earmarked to play a key role.