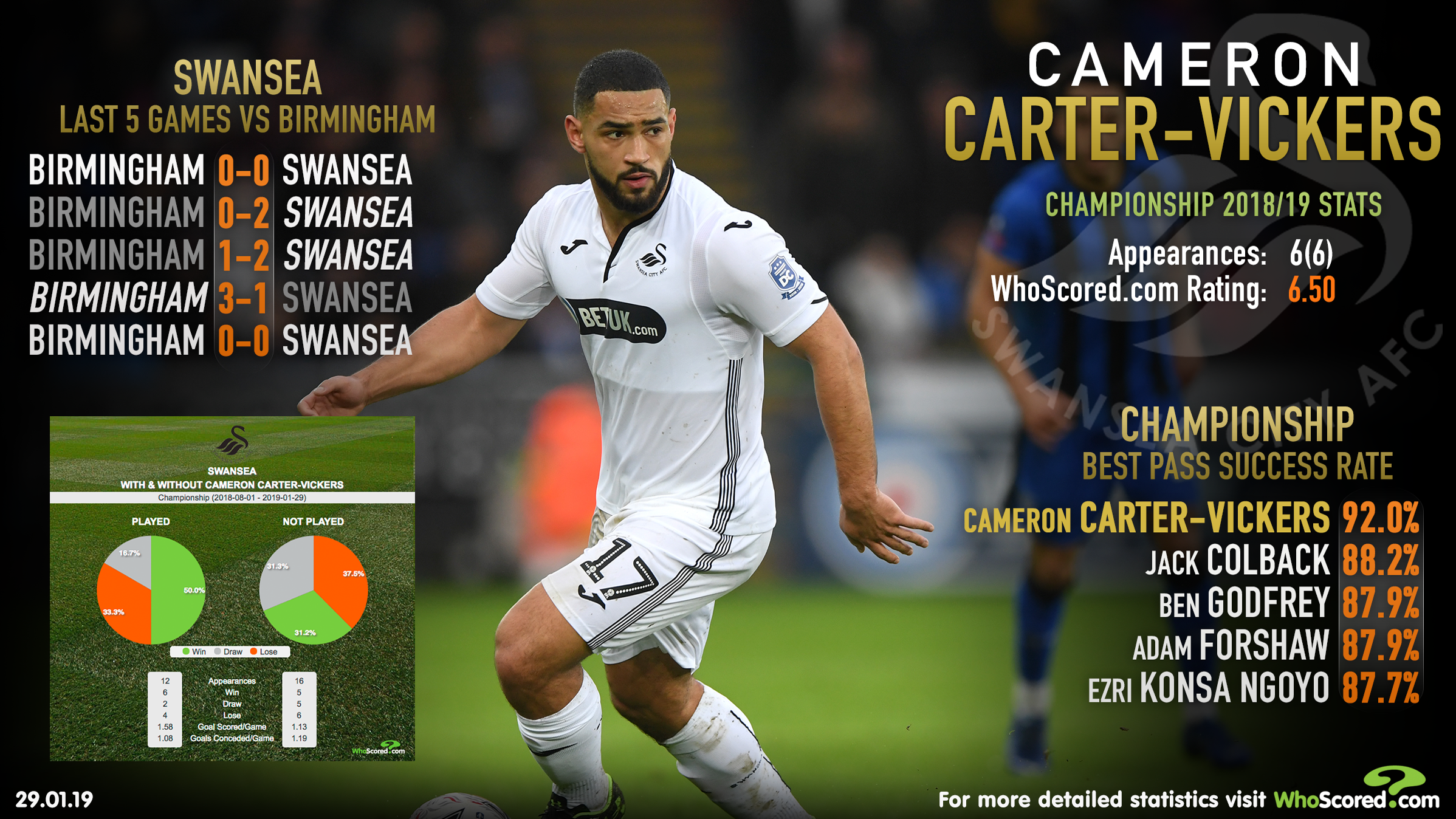 After a resounding 4-1 win over Gillingham to send Swansea into the next round of the FA Cup, attention returns to the Championship, where the Swans tonight host Birmingham.

A four-match unbeaten run in the league has propelled Graham Potter’s side back into play-off contention and victory over the Blues could move them to within three points of the top-six. WhoScored.com believe Swansea have the means to prolong this good run of form.

Just the solitary point separates the Swans and the Blues ahead of this midweek encounter at the Liberty Stadium in what could prove to be a crunch tie in the race for play-off places.

However, Swansea are the form team coming into this tie, with Birmingham currently mired in a four-match winless run, falling to defeat in the last two at the hands of Middlesbrough and Norwich.

History is on Swansea’s side coming into this meeting too. Indeed, Birmingham have won only one of the last five matches between these two, with the Swans unbeaten in the last three, winning two of those.

Having been held to a 0-0 draw at St. Andrew’s in the reverse fixture, a game Swansea dominated possession but were fortunate to emerge with a point, they’ll be hopeful of turning possession into goals against the Midlands outfit.

The WhoScored.com match forecast suggests it is very likely that Swansea ‘will dominate possession’ once more and with Cameron Carter-Vickers expected to start, this should come to fruition tonight.

The 21-year-old is set to deputise for the injured Joe Rodon alongside Mike van der Hoorn at the heart of the defence against Birmingham and with one of Swansea’s WhoScored.com styles of play being ‘possession football’, the young defender has the means to ensure the Swans dominate the ball.

Carter-Vickers has a better pass success rate (92%) than any other player to make 10 or more Championship appearances this season, and the ability to not needlessly sacrifice the ball can play a huge role in Swansea maintaining their fine unbeaten run.

It means that opponents struggle to rob the Swansea backline of possession, tiring out strikers as they chase the ball, and it translates to a better win ratio when Carter-Vickers features in the Championship this season (50%) compared to when he doesn’t appear for Graham Potters side (31.2%).

However, while Birmingham have faltered of late, Swansea need to ward on the side of caution against Garry Monk’s side.

Swansea’s former boss will be looking to get one over his former employers and he has at his disposal the Championship’s highest rated player in Lukasz Jutkiewicz.

The 29-year-old has gained a WhoScored.com rating of 7.83 this season, with his 10 goals and nine assists contributing to that fine return.

While Jutkiewicz’s performance levels have dipped of late, the striker is still a hugely effective forward on his day and if the Swansea backline is unable to keep him in check, then the Birmingham star very much has the means to add to his fine goalscoring record at the Liberty Stadium tonight.

That being said, if Carter-Vickers steps in the fill the void left by Rodon’s absence in defence effectively, then Potter could oversee another positive result and see the Swansea maintain their unbeaten run and march towards the top six.