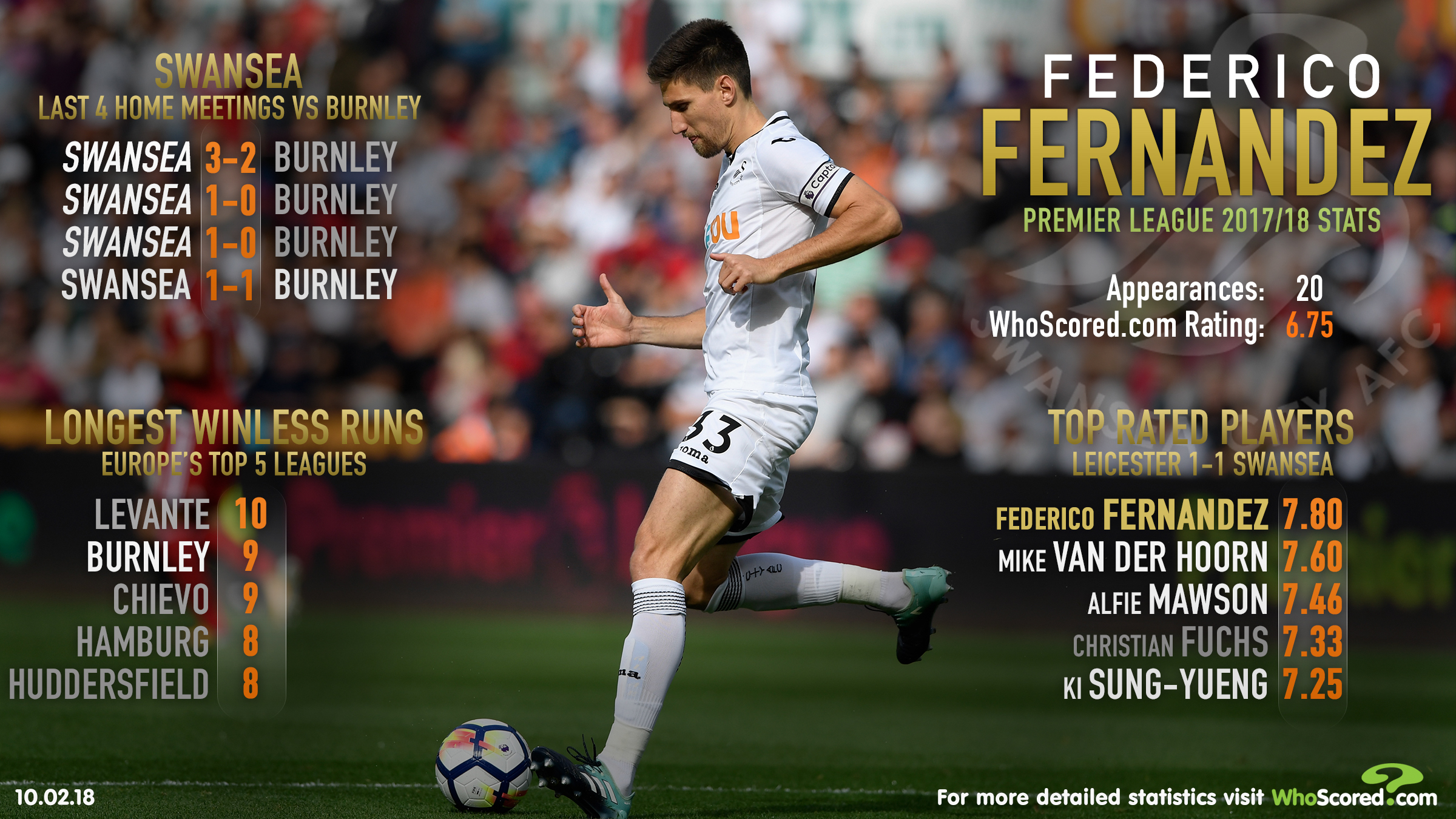 The Swans head into this game on the back of a thumping 8-1 win over Notts County which booked their place in the fifth round of the FA Cup.

Carlos Carvalhal’s side are on an eight-match unbeaten run – four of which they have won – with the Portuguese boss overseeing just one loss since taking over at the Liberty helm.

Carvalhal made the headlines for all the right reasons in midweek as he handed out cakes to the media, but three points today would taste even sweeter for the South Wales side.

Swansea welcome Burnley at just the right time, too.

Only La Liga outfit Levante (10) are on a longer winless run than the Clarets (nine) in Europe’s top five leagues at present.

Swansea are unbeaten in their last four home competitive meetings with Burnley, winning the last three.

There have been two clean sheets in those three wins, and another resolute defensive display would be welcome this afternoon.

Federico Fernandez secured the WhoScored.com man of the match award in the 1-1 draw with Leicester last week with a 7.80 rating and the Argentine will look to churn out another commanding performance at Burnley’s expense.

Since Fernandez’s arrival in 2014, the Swans have performed far better with the 28-year-old at the heart of the defence, winning 34.9 per cent of the Premier League games he has started.

That figure drops to 26.5 per cent without the defender starting.

Today the Swans face a Burnley outfit who have scored just 12 league goals in 13 away games.

Fernandez and his colleagues in the Swans rearguard will be hopeful of shutting out a Clarets attack who have scored just three goals in their last six away games, one of which was a Karl Darlow own goal in the recent 1-1 draw with Newcastle.

Alongside Alfie Mawson and Mike van der Hoorn in defence, Fernandez has been an impressive performer under Carvalhal, and the centre-back trio have the means to keep Burnley at bay.

That being said, the Clarets are formidable opponents on their day and while their form has dipped in recent weeks, they are seventh in the table for a reason.

Dyche’s side have developed a statistically calculated WhoScored.com strength of ‘protecting the lead’ and if Burnley do go ahead, they have the means to see out the win.

Burnley may have scored just three goals in their last six away games, but one of those was by Ashley Barnes.

He also found the target in the 2-0 win over Swansea back in November, a match in which he earned the WhoScored.com man of the match award.

Fernandez will have his hands full in his bid to keep Barnes at bay, but the Swans man is experienced enough to keep the Burnley forward in check today.

If he does that, Swansea can extend their unbeaten run to nine games and inflict further misery upon on the Clarets.

Fede vows to fight on