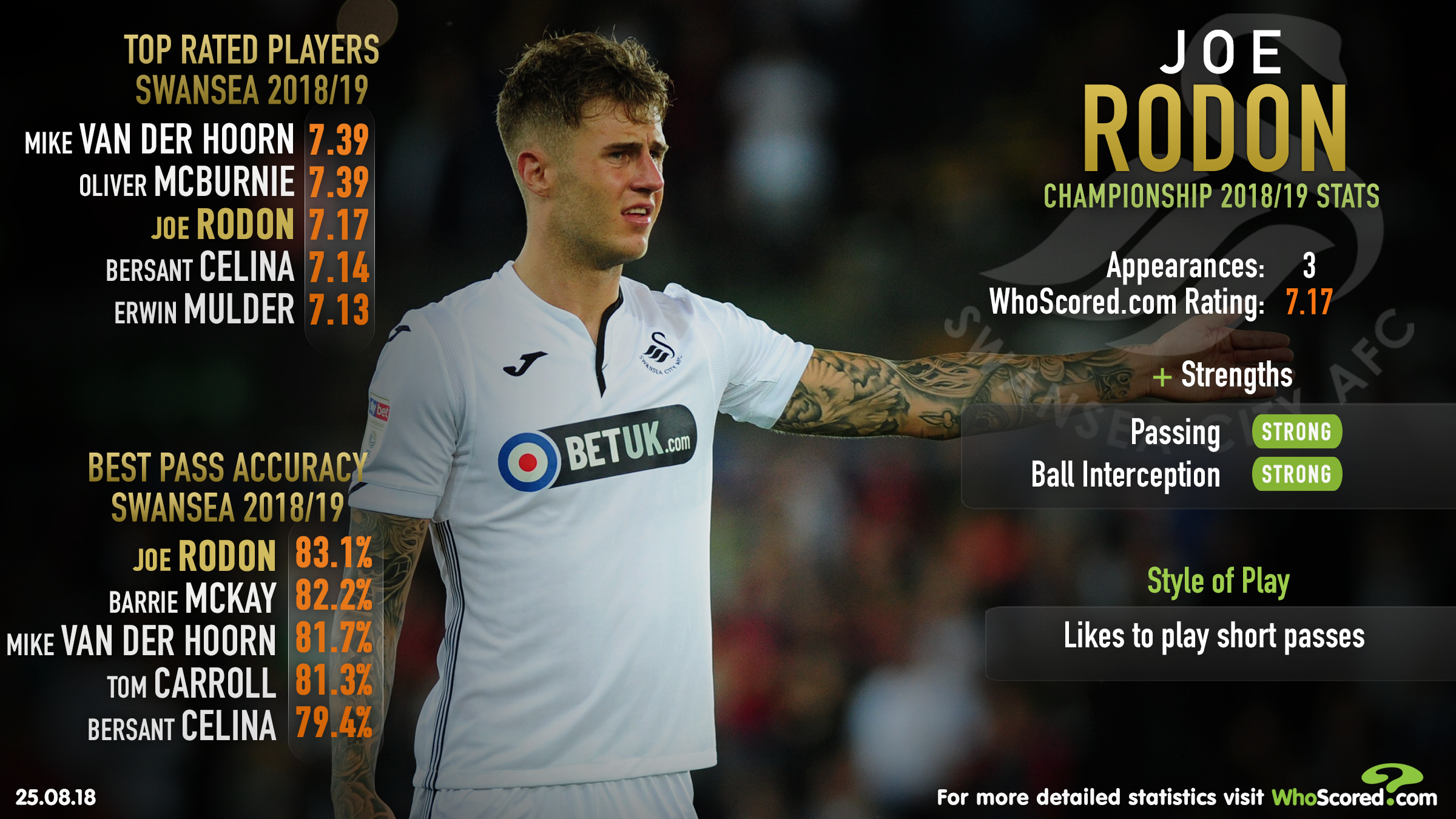 Having twice taken the lead, Swansea were pegged back twice by Leeds on Tuesday night and were forced to share the spoils in an entertaining 2-2 draw at the Liberty Stadium.

Familiar face Pablo Hernandez popped up with the key equaliser 10 minutes from time after Oliver McBurnie had twice put Swansea ahead to earn a spot in the WhoScored.com team of the week.

The Scot may have been the centre of attention in midweek, but the game also featured another solid display from local lad Joe Rodon at the back.

Seeing a player come through the ranks to impress is always a joy for any club and Swansea-born Rodon is doing all he can to nail down a regular starting spot at the Liberty.

Leeds was the Welshman’s third league start of the season and in that time, he has gained a WhoScored.com rating of 7.17. Only centre-back partner Mike van der Hoorn and McBurnie (both 7.39) have gained higher of all Swansea players this season.

The games are coming thick and fast now and up next is the welcome of Bristol City. The Robins have endured a stuttering start to the campaign having failed to win their opening three matches, but they put a key three points on the board at QPR in midweek and they’ll look to build on that this afternoon.

Bristol City will have their work cut out if they are to break Swansea down, though, particularly with Rodon excelling alongside van der Hoorn.

The Swans' opponents today, meanwhile, may have scored six times already this term, but three of those six goals came against a QPR side struggling at the wrong end of the table after four games.

Having already come up against Nottingham Forest, Bolton and Middlesbrough this season, the trip to Swansea is likely to be another tough test for Bristol City.

Rodon will hope to play a key role once more, with the youngster vital in Swansea developing a statistically calculated WhoScored.com style of play of ‘short passes’.

Despite his inexperience, Rodon’s pass success rate (83.1 per cent) is already better than any other Swansea player, while a return of 47.3 passes per game is second of all players at the club, which reinforces a statistically calculated WhoScored.com strength of ‘passing’.

If he is able to play the ball out from the back, then Swansea can play their natural game of building attacks from defence, which has served them well so far.

Rodon's return of two interceptions per game is top of all Swansea players and he’ll need to maximise a strength of ‘ball interception’ in order to minimise the attacking threat Bristol City carry. They have gained a statistically calculated WhoScored.com strength of ‘creating chances using through balls’ and denying summer arrival Andreas Weimann the chance to latch onto these through balls will be crucial.

Only Neal Maupay (five) has scored more goals than Weimann (four) in the Championship this season, with the Austrian finding the back of the net in three of his four league appearances for Bristol City.

The 27-year-old’s WhoScored.com rating (7.53) is better than any other Robins player and keeping Weimann quiet today will be key for the Swans.

Rodon’s performances so far this season have been reminiscent of a seasoned professional.

It would be no surprise should he produce another big display this afternoon.