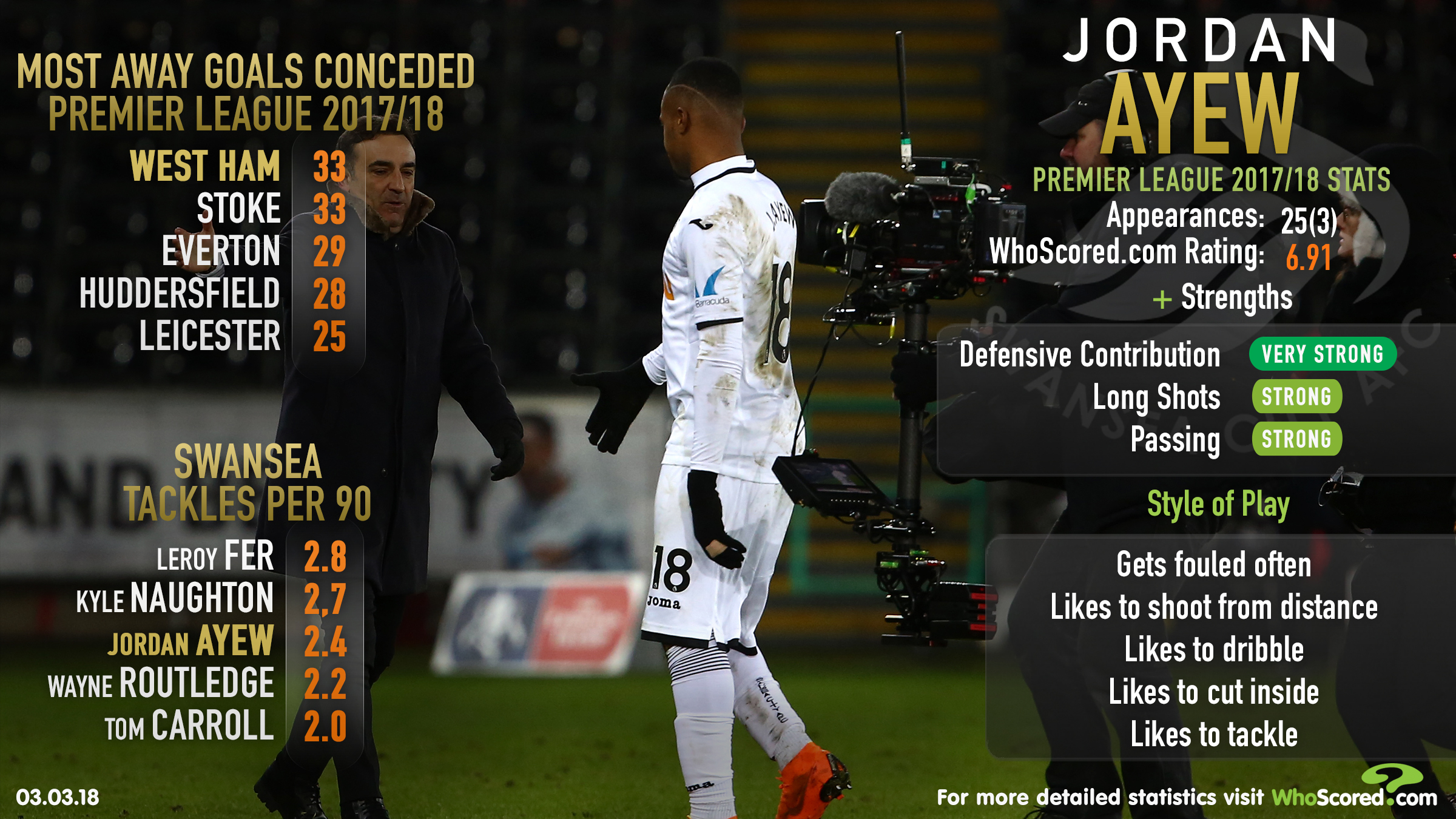 The Swans eased into the next round of the FA Cup with a comfortable 2-0 win over Sheffield Wednesday on Tuesday nigh.

In doing so, they landed a sixth successive home win first the first time since December 2007.

They will look to build on that victory when they welcome West Ham to the Liberty Stadium.

West Ham have faltered on their travels this term, picking up just 11 points and only two wins from 14 away matches.

What’s more, no team have conceded more away goals than the Hammers (33) in the Premier League this season.

Indeed, it’s no surprise that four of their five statistically calculated WhoScored.com weaknesses are defensive-related considering the lack of solidity at the back.

Swansea will look to capitalise on their shortcomings and, with Jordan Ayew in good form coming into this crunch game, you’d fancy the Ghanaian to add to his five league goals this term.

Despite coming on as a substitute, Ayew was named the WhoScored.com man of the match against Sheffield Wednesday in midweek having scored the opening goal to return a WhoScored.com rating of 8.27.

However, his overall record against West Ham isn’t great.

Ayew’s managed just one goal in four Premier League meetings with the West London outfit, but that one goal came in his sole home league appearance against the Hammers.

Whether he is close to the West Ham goal or a distance away, you’d back the 26-year-old to have a big say in the outcome of today’s match.

Indeed, he boasts a statistically calculated WhoScored.com strength of ‘long shots’, while one of West Ham’s aforementioned weaknesses is ‘defending against long shots’.

Given that West Ham have kept just two away clean sheets this season – only Stoke (one) have kept fewer in the Premier League – you’d expect Swansea to break the Hammers’ resolve, with Ayew the attacking lynchpin.

Standing between Ayew and a goal, though, will be Hammers shotstopper Adrian, who has established himself as a first-team regular having lost his starting spot to Joe Hart at the beginning of the campaign and then won it back.

David Moyes’s team are a stronger side with the Spaniard in goal, with West Ham boasting a better win ratio (35.7 per cent) and conceding fewer goals per game (1.43) with Adrian starting in the Premier League this season than without him (14.3 per cent and 2.14 respectively).

West Ham are evidently a better team with Adrian between the sticks, but Ayew and Swansea have what it takes to secure a seventh successive win at the Liberty Stadium.

If Ayew is playing to the best of his abilities, then another crucial result is within the Swans’ grasp.