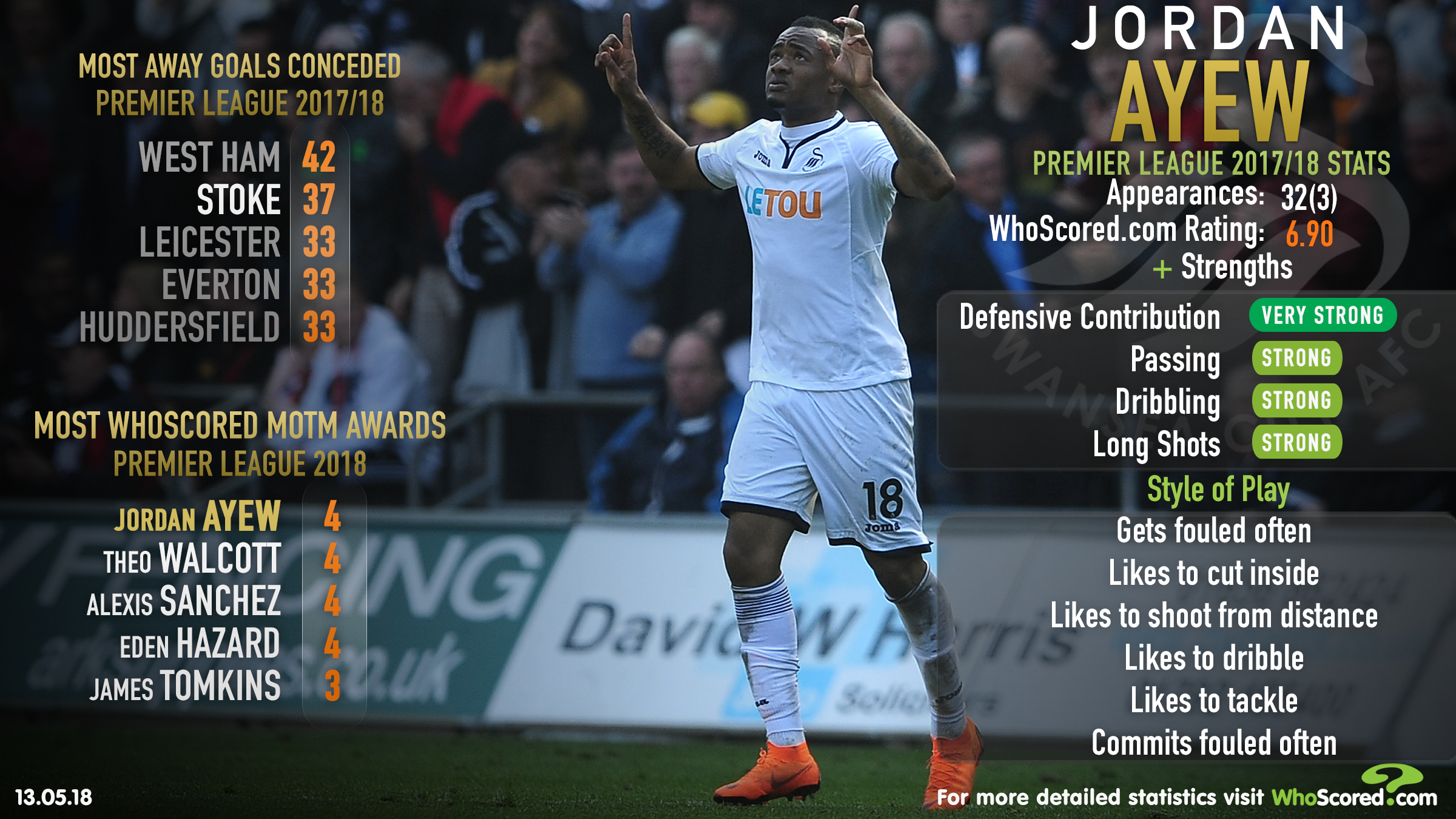 Nothing other than three points will suffice for the Swans if they are to have any chance of beating the drop today.

The welcome of already relegated Stoke City should boost their chances of pulling off a miraculous escape.

Only West Ham (42) have conceded more away goals than Stoke (37) in the Premier League this season and Swansea need to put the Potters to the sword if they are to secure their top-flight spot.

Southampton welcome free-flowing Manchester City to St Mary’s this afternoon and it’s important to not rule Swansea out of finishing outside of the bottom three just yet.

Earning the three points is the priority, though, and Jordan Ayew is the man tasked with firing the Swans to victory.

The Ghanaian is the club’s top scorer this season, with seven league goals to his name, while six of the nine goals he has had a direct hand in in total have been at the Liberty Stadium.

His good form in 2018 has certainly helped the Swans, with Ayew helping himself to four WhoScored.com man of the match awards this year. No player in England’s top tier has won more.

Another star display will go some way to overcoming a Stoke side that struggles to shut opponents out on the road and improve Swansea’s chances of overcoming the huge goal swing that’ll be required to leapfrog Southampton in the table.

With a WhoScored.com rating of 6.90, Ayew is Swansea’s second highest rated player in the Premier League this season and you can be sure he’ll do all he can to worsen Stoke’s current predicament.

Standing between the 26-year-old and the goal, though, is Potters centre-back Ryan Shawcross.

The England international has gained a WhoScored.com rating of 7.06, the second best of all Stoke players this season, and the team perform much better with Shawcross in the starting XI.

Their goals conceded per game return drops from 2.55 without him in the side from the start this term to 1.5 when he features from the off, with their loss ratio, understandably, dropping from 63.6 per cent to 46.2 per cent with the centre-back starting.

However, after Stoke’s relegation was confirmed after a 2-1 loss to Crystal Palace last week, they have nothing to play for and while they’ll hope to end a miserable campaign on a high, Swansea have the means to inflict further misery upon a downtrodden Potters outfit.

If Ayew plays to the standards expected of him this afternoon, then Swansea could at least put another three points on the board.

If he can continue his good home goalscoring form, then the Swans’ chances of pulling off a remarkable escape increase significantly.