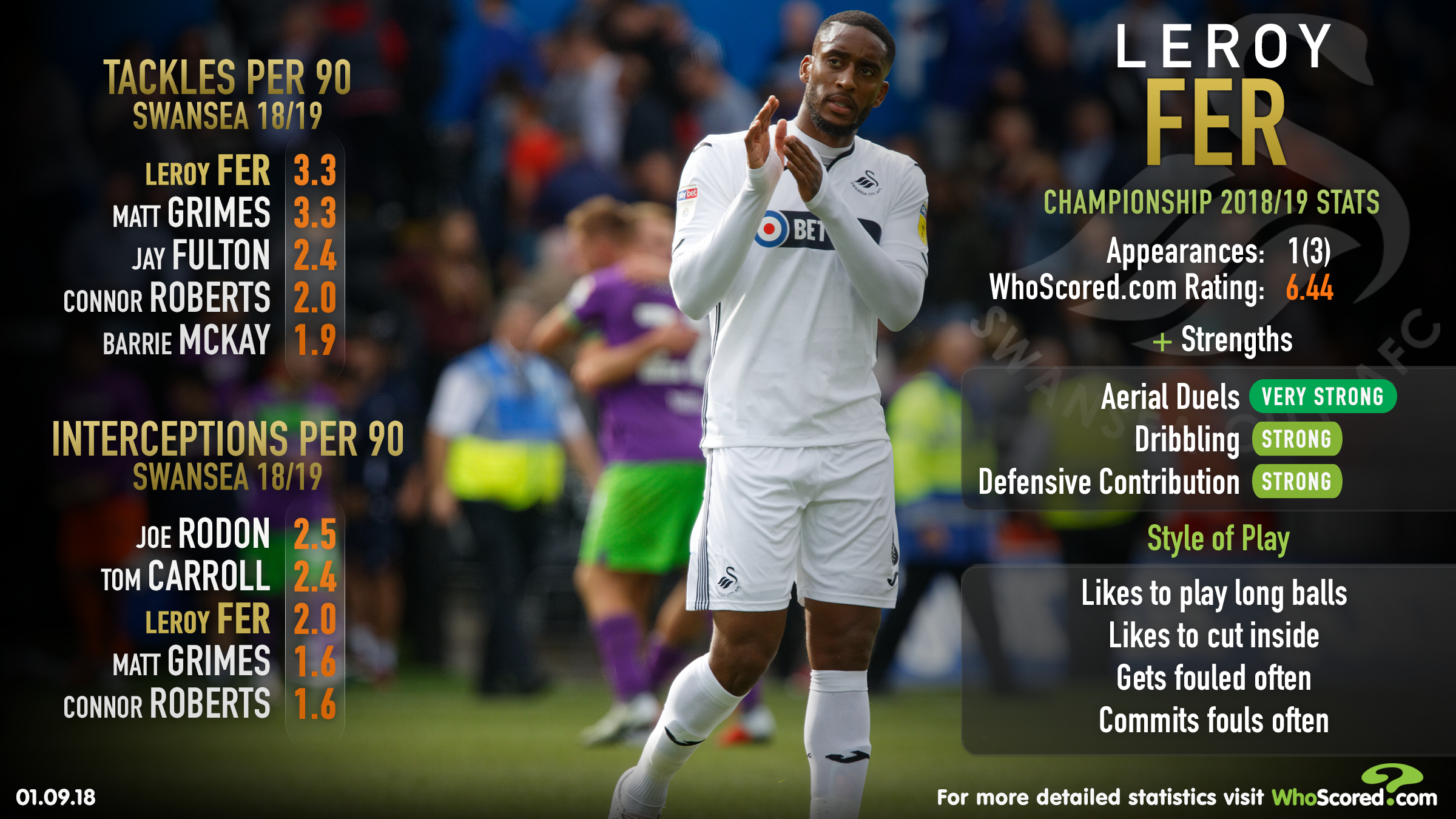 After falling to their first league defeat of the season with the 1-0 loss to Bristol City, thus bringing the unbeaten start to the campaign to an end, the Swans will look to bounce back with a win at Millwall this evening.

The trip to the Den is a tough one to navigate, and WhoScored.com believe a midfield battle could prove decisive in the capital.

Millwall are unbeaten at home so far this season, while Swansea are yet to lose on their travels this season having beaten Sheffield United on the opening weekend before that hard-fought 0-0 draw with Birmingham.

This will be the Swans’ first visit to Millwall since 2011, when they won 2-0, and Graham Potter will do what he can to oversee a similar result.

With just three points separating the pair, this match could prove crucial come May with the duo harbouring Premier League aspirations.

It could be that Leroy Fer has a big role to play for the Swans.

The Dutchman has made just one league start this season, in the entertaining 2-2 draw with Leeds, as he eases back into action after long-term injury.

His work off the ball may be vital if the Swans are to come away from South London with all the spoils.

One of Fer’s three statistically calculated WhoScored.com strengths is ‘defensive contribution’ and for good reason, with 3.3 tackles and 2.0 interceptions per 90 ranking first and third, respectively, of all Swansea players in the Championship this season.

Four of the five goals Millwall have scored this season have come at The Den and limiting their goalscoring influence from midfield will go a long way towards eliminating one of their primary goal threats.

Shaun Williams has had a direct hand in two of the four home league goals Millwall have scored this term, netting one and assisting another, while a WhoScored.com rating of 7.70 ranks among the top 10 players in the Championship this season.

The 31-year-old has again been hugely influential for Millwall in the middle of the park and Fer needs to work tirelessly in order to keep him in check.

But Williams also needs to keep his cool in order to deny Fer the chance to press forward when in possession.

One of the Dutchman’s WhoScored.com strengths is ‘dribbling’ and when he wins the ball, he has the means to draw fouls - one of his WhoScored.com styles of play is ‘gets fouled often’ after all - that will not only ease pressure on the Swansea defence, but present them with the chance to test the Millwall rearguard.

Williams’ return of 1.5 fouls per game is the second highest of all Millwall players, while the Lions have developed a WhoScored.com weakness of ‘avoiding fouling in dangerous areas’.

If handed the chance to gain a head of steam, Fer has the means to drive upfield with the ball and push the Millwall midfield and backline back and this could well prove to be an effective route to goal for both player and club, be it from open play or set-piece situations.

Without doubt the Millwall fans won’t welcome Swansea with open arms and they’ll look to pressure the visitors from the outset, but if the Swans can keep a cool head, then they have the means to return to winning ways this evening.