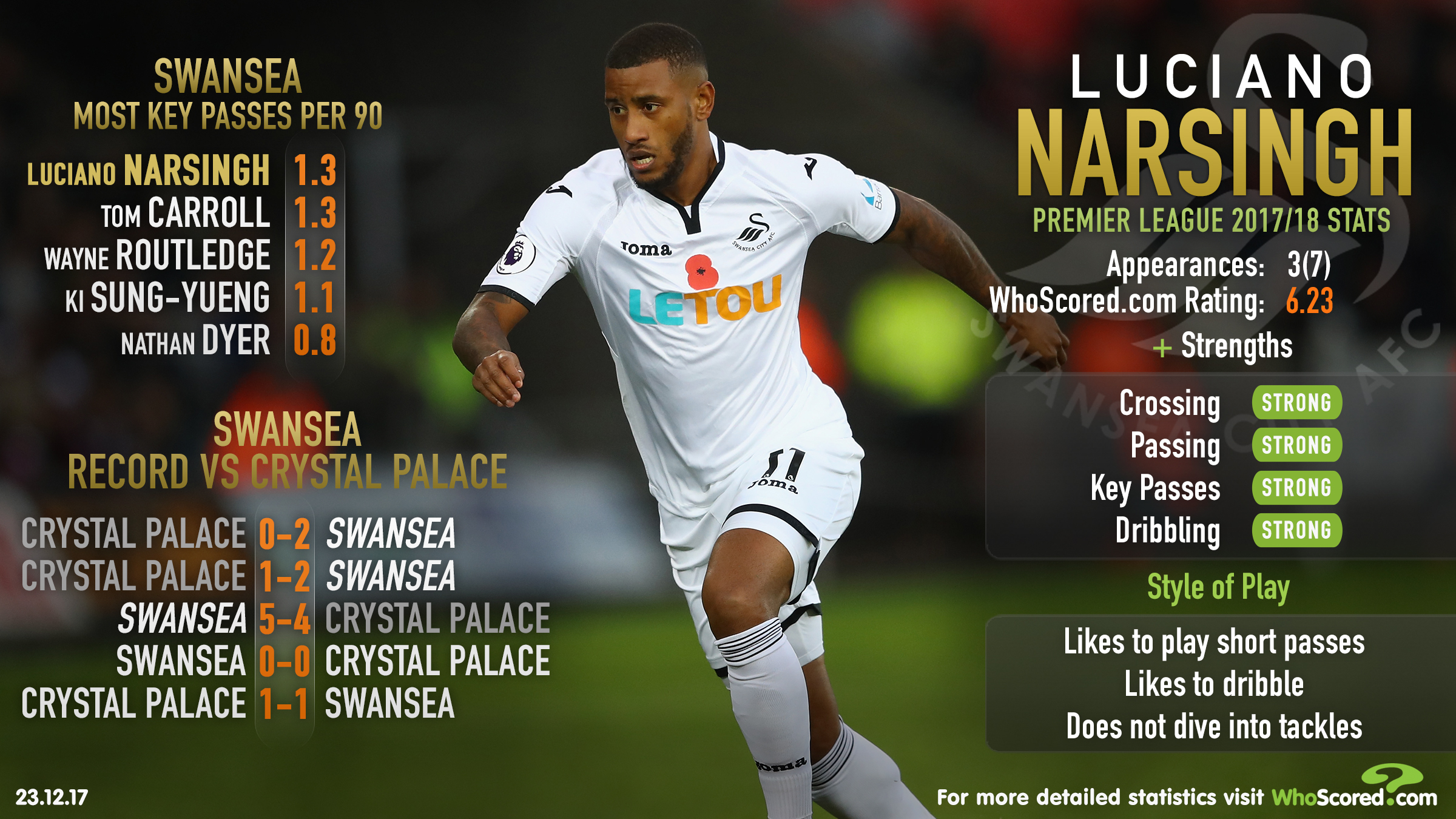 Leon Britton takes caretaker charge of the Swans following Paul Clement’s departure this week and he will look to get the team back on track against opponents the club have a good recent record against.

The South Wales side are unbeaten in their last five league meetings with Crystal Palace and have won the last three, including last season’s memorable 5-4 triumph at the Liberty.
Having said that, beating the Eagles again will be easier said than done.

Roy Hodgson’s side are on a seven-match unbeaten run in the Premier League, with three wins coming in that sequence.

They earned their first away victory of the campaign with at Leicester last time out and morale will undoubtedly be high coming into this one.

But Swansea can take the wind out of their sails today and crucial to that could be the attacking influence of Luciano Narsingh.

The 27-year-old has struggled to nail down a regular starting spot since his arrival in SA1 almost 12 months ago, but Swansea are a better team with the winger in the XI.

Indeed, they are scoring 1.33 goals per game with Narsingh starting in the Premier League this season, with that figure dropping to 0.4 when he doesn’t feature from the off.

Crystal Palace have developed a statistically calculated WhoScored.com weakness of ‘defending against attacks down the wings’ and the creative and attacking thrust Narsingh provides from the flanks may be Swansea’s best route to goal today.

No Swans player is making more key passes per 90 than Narsingh (1.3), while a return of 1.6 successful dribbles per 90 is third of every player at the club, matching the Dutchman’s WhoScored.com strengths of ‘key passes’ and ‘dribbling’.

With Palace also boasting a WhoScored.com weakness of ‘defending against skilful players’, they could struggle as and when Narsingh picks up speed and maximises his inventive talent to put the Palace backline to the sword.

However, the former PSV Eindhoven man will have his work cut out as he looks to get the better of left-back Jeffrey Schlupp.
The 24-year-old is an adept individual when he presses forward, while his ability to track back has seen him develop a WhoScored.com strength of ‘defensive contribution’.

He’s top for tackles per game (2.6) of all Palace players and it could well be that the possible battle between Narsingh and Schlupp determines the outcome of today’s match.

Should the former get the better of the latter, then a vital three points could be Swansea’s for the taking.