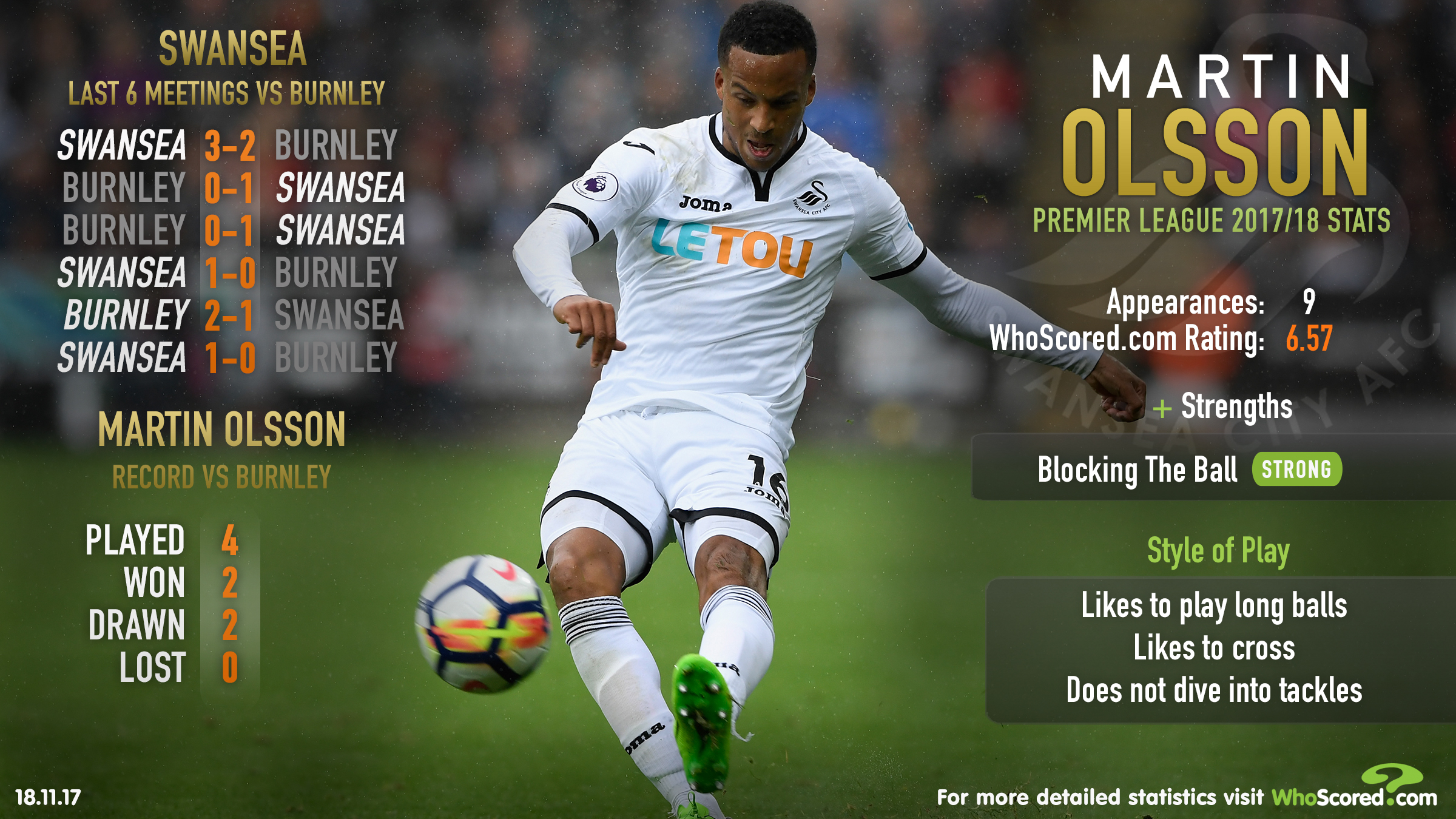 The international break has given the Swans the chance to regroup as they look to gain a head of steam ahead of the hectic festive period that is approaching.

Today’s meeting with Burnley is a tough one to negotiate on paper, of that there is no doubt.

The Clarets have lost just one of five home league matches this season and are unbeaten in their last four in front of their own fans.

However, Swansea have a fine record against Burnley, with the Swans losing just one of their last six league meetings with Clarets, winning the other five.

What’s more, despite their good form at Turf Moor, Sean Dyche’s side have struggled to hit the back of the net with any sort of consistency.

Indeed, no team has scored fewer home goals than Burnley (3) in the Premier League this season, while they have conceded just twice, so a low-scoring encounter is on the cards this afternoon.

The likelihood of Swansea shutting out Burnley is improved by the impending return of left-back Martin Olsson.

Sam Clucas has deputised in the Swede’s absence, but a specialist in the role is vital for the balance of the side.

The 29-year-old has started nine of 11 Premier League matches this season, earning a WhoScored.com rating of 6.57 in the process.

Olsson has impressed against Burnley in his four meetings with the Clarets, with the Swede unbeaten in that run, winning two.

One of those two victories came last season where Swansea came from behind to defeat Burnley 3-2 at the Liberty Stadium, with Olsson netting the crucial equaliser to help return a WhoScored.com rating of 8.78.

When afforded the chance to press forward, he is able to whip the ball into the box, with an average of 0.9 accurate crosses per game – the second best return of all Swans players this term.

Against a resolute Burnley outfit, his influence from out wide could be vital.

Olsson’s defensive resolve will again be important in limiting the Burnley attack, but if they adopt a similar approach to West Brom and Huddersfield, who both came away from Turf Moor with a clean sheet, then Swansea can secure a positive result today.

Olsson needs to be on top of his game to ensure Johann Berg Gudmundsson is unable to prise apart the Swansea defence.

The Icelander has assisted two of the three home goals Burnley have scored this season and keeping the 27-year-old at bay is crucial for Swansea in their bid to claim at least a point.

If Olsson plays to the standards expected of him, then he has the means to help his side to another win at Burnley’s expense.