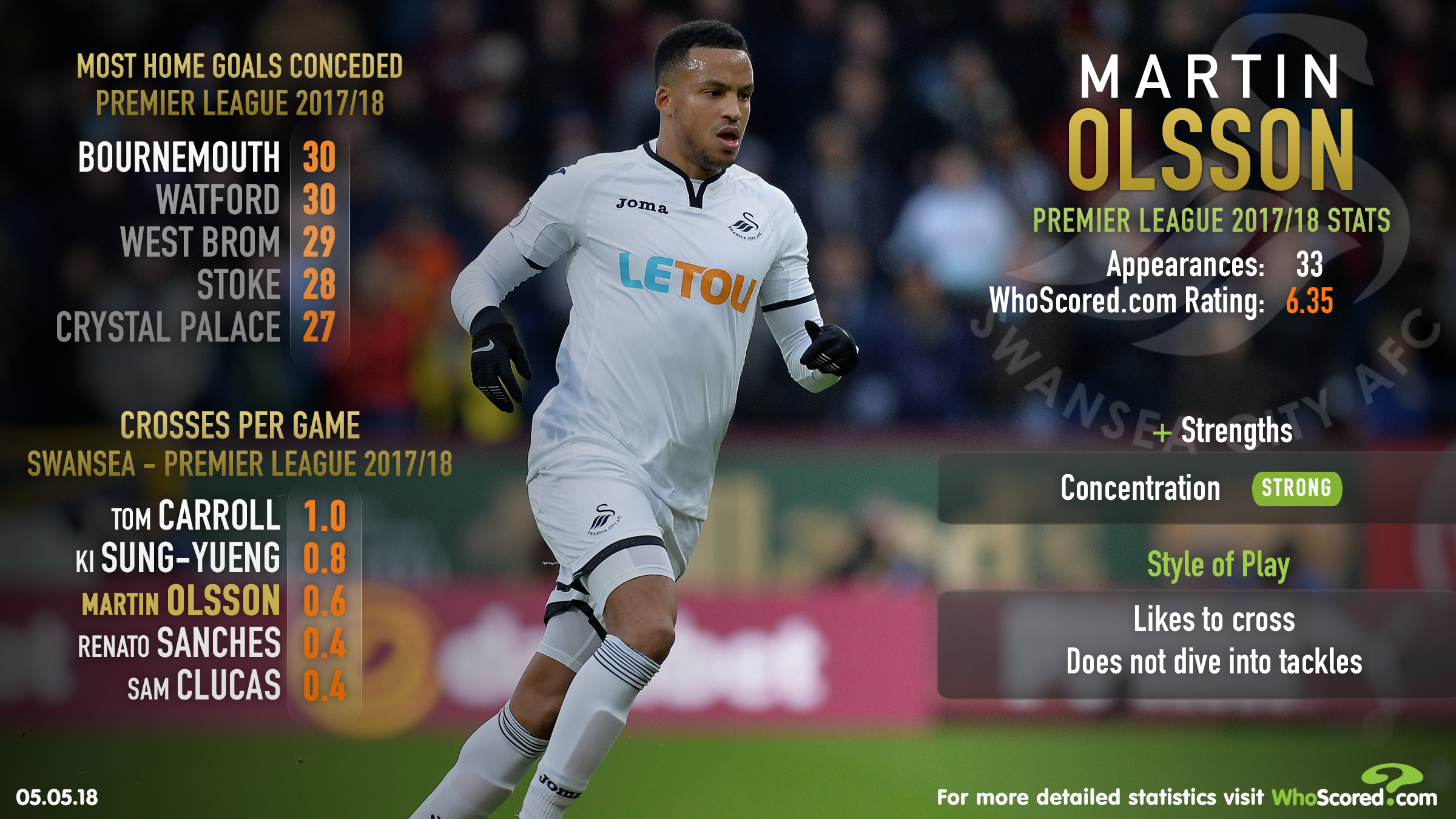 At this stage of the season, every point is vital and it’s crucial for Swansea City to secure a positive result on the South Coast this afternoon.

Bournemouth haven’t been in great form of late, failing to win their last five and losing their last three.

On home turf, however, they have lost just two of their last seven, with the defeats coming against top-four pair Tottenham and Manchester United.

Swansea need to focus all of their effort to coming away from the Vitality Stadium with at least a point today ahead of next week’s crunch clashes with Southampton and Stoke at the Liberty Stadium.

Goals are certainly the order of the day as the Swans aim to overcome the Cherries.

No team has conceded more goals at home in the Premier League this season than Bournemouth (30), who have developed seven statistically calculated WhoScored.com weaknesses this season, all of which relate to defending.

One of those is ‘defending against attacks down the wings’ and it’s out wide where Swansea can put Eddie Howe’s side to the sword.

Martin Olsson has been a consistent player in the Swans set-up this term, starting 33 of 35 Premier League matches.

Either as a left-back or a left wing-back, depending on the system Carlos Carvalhal favours on the day, the Swede will always look to press forward and stretch opponents from deep.

His impact could be crucial today as he looks to provide a further offensive outlet for the visitors.

If he makes the right move down the flank at the right time, you can be sure Olsson will look to maximise his crossing quality to help test this Bournemouth backline.

One of his statistically calculated WhoScored.com styles of play is ‘likes to cross’ and for good reason, with his return of 0.6 crosses per game the third highest of all Swansea players this season.

Provided he is able to push upfield, Olsson has a huge role to play with his attacking influence out wide a key weapon in the Swansea arsenal.

That being said, it won’t be plain sailing for Olsson today. Regardless of whether he plays at left-back or left wing-back, it’s likely the 29-year-old will be up against Cherries star Ryan Fraser.

The versatile Scot has been an impressive performer for Bournemouth this season, chipping in with four goals and three assists.

Bournemouth score more goals per game with Fraser starting (1.24) than without him (1.07) in the Premier League this season and while Olsson needs to help support the attack, he must keep his wits about him in order to limit Fraser’s attacking input.

If he can successfully carry out his offensive and defensive duties, however, then Olsson has what it takes to swing the game in Swansea’s favour.