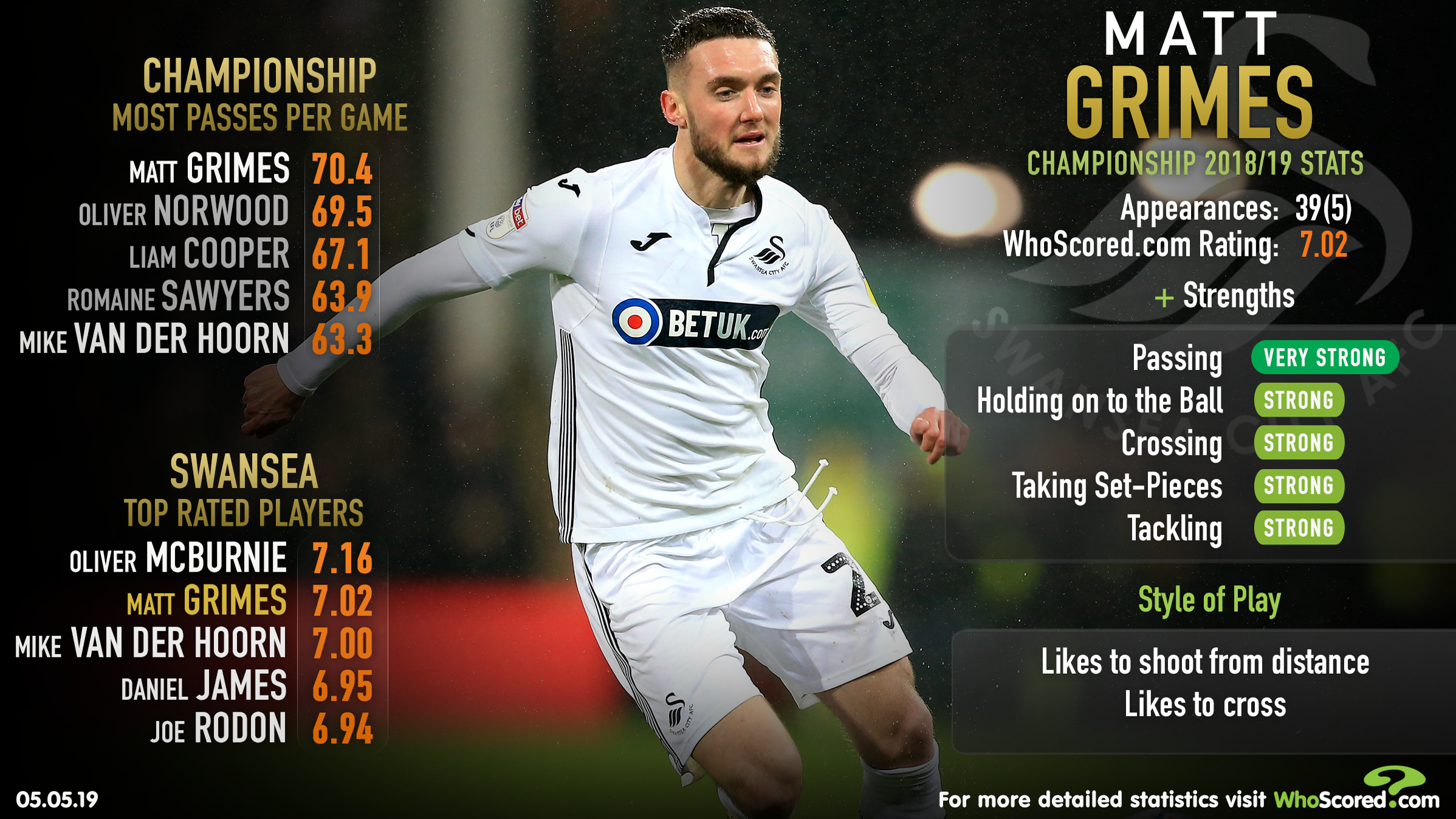 Football stats experts WhoScored.com take a closer look at Swansea City's Player of the Year Matt Grimes as the midfielder prepares to round off an impressive campaign at Ewood Park this afternoon (12.30pm).

In the final game of the season, Swansea will hope to see out the campaign on a high.

Having held playoff chasing Derby to a 1-1 draw in midweek, they’ll look to round off the season with victory at Blackburn. Having won the reverse fixture 3-1 back in October, Graham Potter will be looking for a repeat display at Ewood Park.

Rovers have put in a good account of themselves following their promotion from League One last season and will be aiming to finish in the top half of the Championship with a win over Swansea.

However, Rovers have lost four of their last seven home league matches, which the Swans must capitalise upon in order to secure all three points today.

What’s more, Rovers’ defensive solidity has been found wanting on occasion this term.

Only a handful of teams have conceded more goals than Tony Mowbray’s side (67) in the Championship this season, while all five of Rovers’ statistically calculated WhoScored.com weaknesses are focused on defending, so exploiting their shortcomings at the back is crucial.

Ensuring they see little of the ball will undoubtedly play into Swansea’s hands as they seek victory with Matt Grimes set to again play a key role in the middle of the park.

The midfielder, who cleaned up at the club's end-of-season awards, has excelled in a number of positions for Potter’s side this term, but he’s set to end the campaign in midfield, where his quality in possession will help dictate play in the middle of the park.

Indeed, Grimes is averaging more passes per game (70.4) than any other player in the Championship this season, reinforcing a statistically calculated WhoScored.com strength of ‘passing’.

What’s more, only Oli McBurnie (7.16) has earned a better WhoScored.com rating than Grimes (7.02) of all Swansea players this season to reinforce what has been a fine campaign for the young midfielder.

He will be looking to end the season by helping Swansea to another three points as they aim to finish the campaign clear in ninth.

Having had a direct hand in three goals in his last seven appearances, impressive considering he plays in a deeper midfield role, Grimes has what it takes to play his part in prying the Blackburn defence open and exploiting their underwhelming defensive record.

If the Swans are to do the double, keeping Bradley Dack in check will be crucial.

However, as impressive in possession as Grimes is, he is also an effective performer off the ball as he averages more tackles per game (2.6) than any other Swansea player to reinforce a statistically calculated WhoScored.com strength of ‘tackling’.

With one final game to go, another fine showing from Grimes would be welcome. His two WhoScored.com man-of-the-match awards have been won away from home this season and you’d back him to land a third and help Swansea to three points in the process.