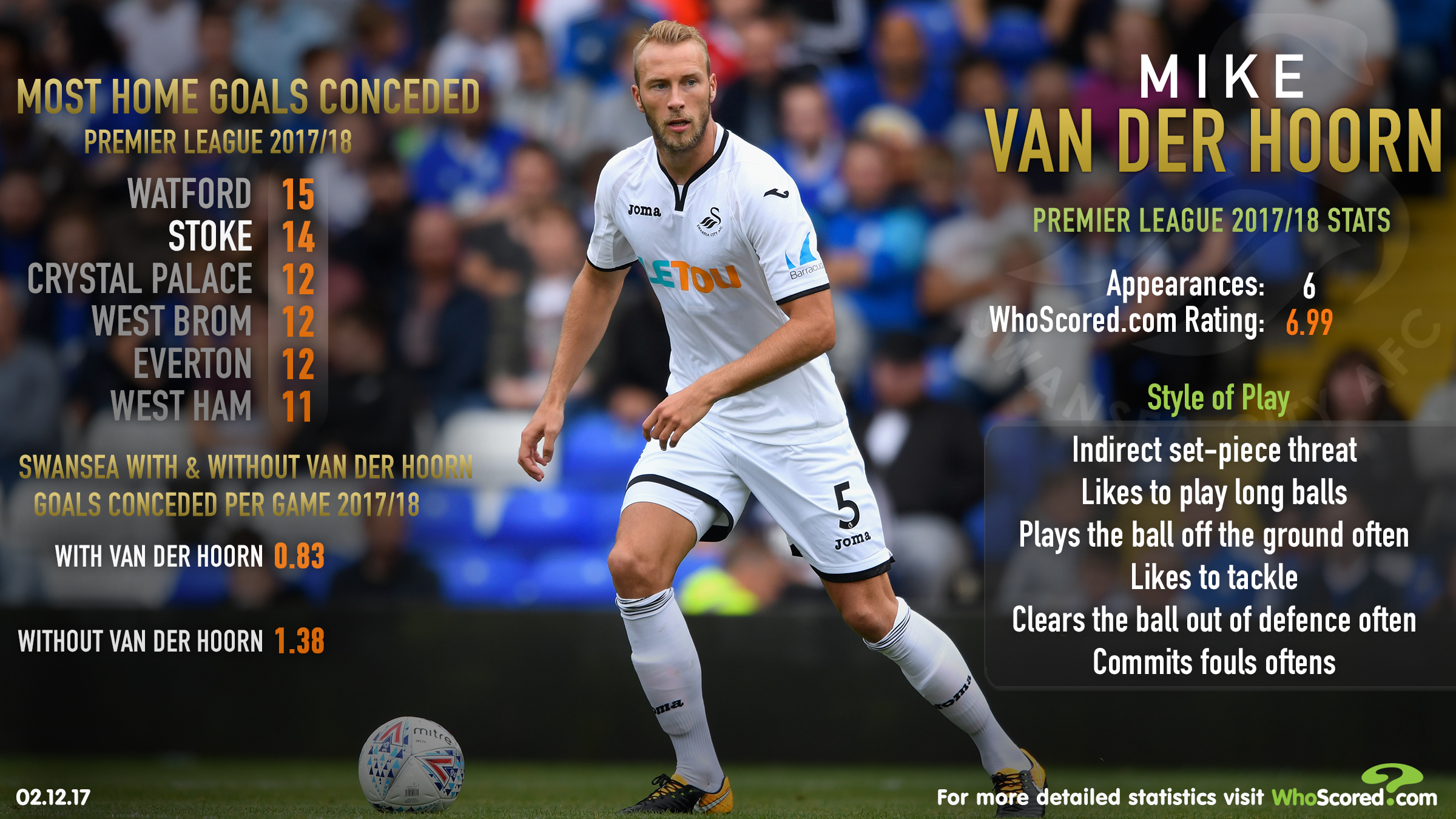 Ahead of the Swans’ Premier League meeting with Stoke City this afternoon, football stats experts WhoScored.com take a look at the big game.

The Swans fell to a 1-0 loss to champions Chelsea in midweek, but there were positives from the defeat that they can draw upon ahead of the visit to the bet365 Stadium.

A 3-0 defeat to Liverpool on Wednesday night will have dented confidence ahead of today’s match up and Swansea must capitalise.

Stoke’s home WhoScored.com rating of 6.63 is among the worst in the Premier League this term.

Only Watford (15) have conceded more goals at home than Stoke (14) in England’s top tier this season and the absence of Jack Butland between the sticks could hinder their pursuit of a clean sheet here.

Their defensive deficiencies can certainly be exploited today with Mike van der Hoorn able to provide an unlikely source of goals for the Swans.

One of Stoke’s statistically calculated WhoScored.com weaknesses happens to be ‘defending set-pieces’ and for good reason too.

Only Watford (nine) and Leicester (eight) have conceded more goals from set-piece situations than Stoke (six) this season and van der Hoorn’s aerial ability could help put the Potters backline to the sword.

Indeed, one of the 25-year-old’s statistically calculated WhoScored.com styles of play is ‘Indirect set-piece threat’.

If the chances from free-kicks and corners are presented for van der Hoorn, the Dutch centre-back has the means to trouble the Stoke goal.

Defensively, too, van der Hoorn has a crucial role to play today.

Swansea concede fewer goals per game with van der Hoorn starting this season (0.83) than when he has not featured from the off (1.38) and that’s seen him gain a WhoScored.com rating of 6.99.

Only Lukasz Fabianski (7.06) has earned better of all Swansea players.

What’s more, only Manchester City (four) have kept more away clean sheets than the Swans (three) in the Premier League this term and if van der Hoorn plays to the best of his abilities, then another defensively resolute display could well be on the cards.

However, the effective Xherdan Shaqiri stands between Swansea and another away clean sheet.

The Switzerland star has been in flying form for the Potters, with his three goals and five assists this term accounting for 50 per cent of the 16 goals Stoke have netted so far.

His good form hasn’t gone unnoticed either, with Shaqiri nominated for the November PFA player of the month award.

It’ll be easier said than done for the 26-year-old to churn out another sparkling display here, however, and if van der Hoorn performs to the standards expected of him, then Swansea have what it takes to secure a vital result in their bid to haul themselves up the table.