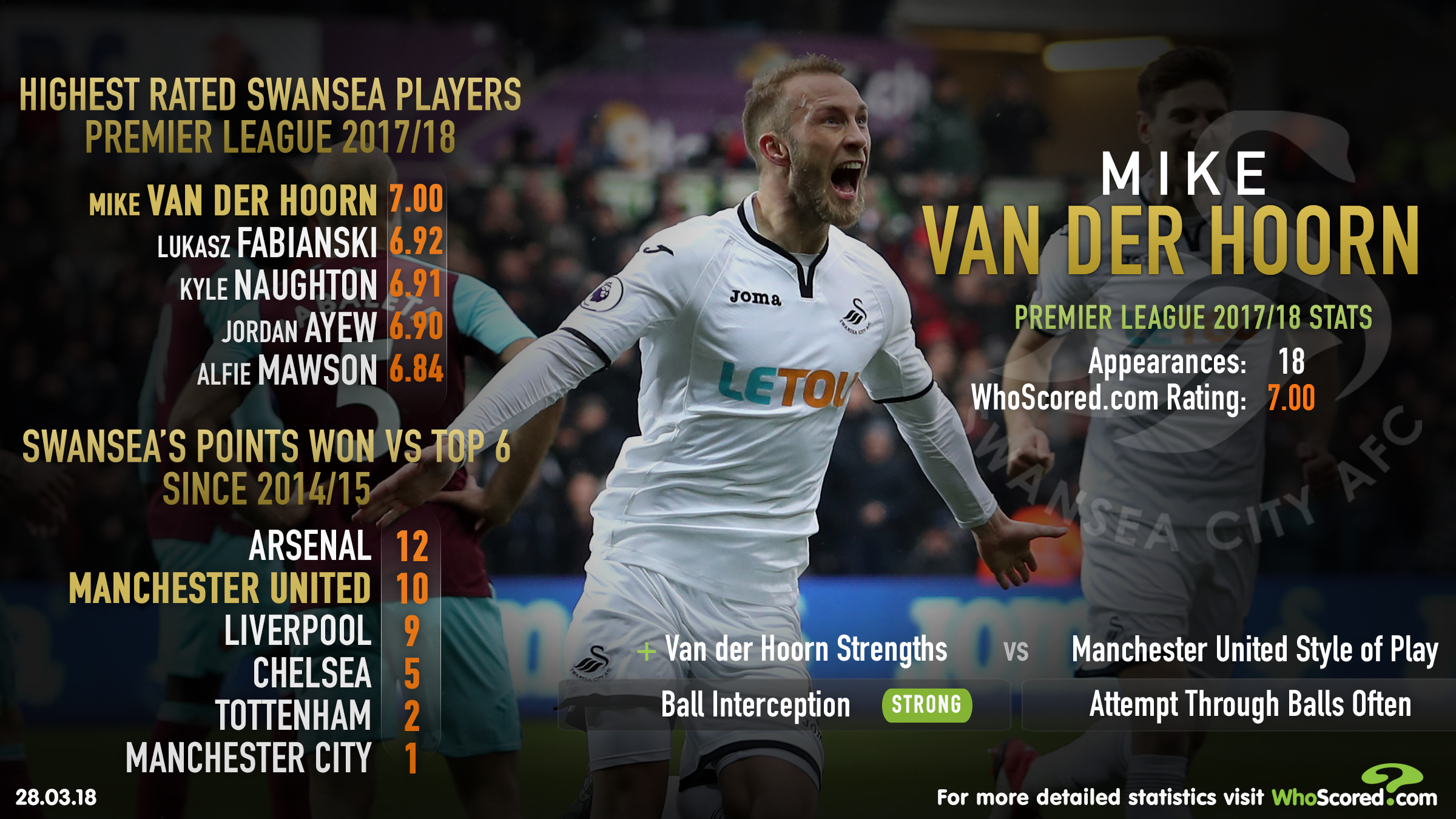 Swansea came up short against Tottenham in the FA Cup quarter-finals before the international break but now have a clear path until the end of the season where they will hope to achieve their objective of Premier League survival.

The Swans were bottom of the Premier League when Carlos Carvalhal took over at the end of 2017 but now the Welsh outfit are three points clear of the drop zone with eight games remaining.

In fact, if the Premier League had started when Carvalhal took over as Swans boss, his team would be up in sixth, above the likes of Chelsea and Arsenal.

Some Swansea players have benefited from Carvalhal’s arrival more than others.

In fact, the identities of the three highest WhoScored.com rated players at the club under Carvalhal show the Portuguese has established a solid spine in his short time at the Liberty Stadium.

The latter has been one of Swansea’s most consistent performers across the season, as illustrated by the fact he is their highest WhoScored.com rated player in the Premier League this term (7.00).

The 25-year-old is enjoying his best run of form at Swansea since joining from Ajax in July 2016, starting each of Swansea’s last nine league games, and he will need to be at his best today as his team travel to Old Trafford.

United have only lost two of their last 42 home league matches and both defeats were at the hands of neighbourhood rivals Manchester City.

However, Swansea have fared well against the Red Devils in recent seasons.

In fact, Swansea have only won more Premier League points against one team – 12 against Arsenal – since the start of the 2014-15 campaign than they have against United (10) of the top-six clubs in the division.

United have conceded the fewest home goals in the Premier League this season, so it’s imperative that Swansea keep things tight at the back and use their statistically calculated WhoScored.com strength of ‘protecting the lead’ if they can get past David de Gea.

With the likes of Alexis Sanchez, Juan Mata, Jesse Lingard and Paul Pogba in their ranks, United have developed a statistically calculated WhoScored.com strength of ‘attempting through balls’ and have the speed and power in attack to hurt opponents if any of the aforementioned quartet are given the time and space to pick a pass.

This is where van der Hoorn, in particular, will be very important for the away side.

The Dutchman has a statistically calculated WhoScored.com strength of ‘ball interception’ and he will need to use his ability to spot danger in order to prevent the likes of Romelu Lukaku being released through on goal.

In Lukasz Fabianski, Swansea have the second highest WhoScored.com rated goalkeeper in the Premier League this season (6.92), but Carvalhal will be keen to avoid handing out goalscoring opportunities to Jose Mourinho’s side.

While the odds are against Carvalhal’s side on Saturday, a run of just one defeat in their last eight league matches shows the improvements they have made under their new manager.

Victories over Arsenal and Liverpool in that sequence also show they are capable of causing an upset and players like van der Hoorn will be crucial if they are to do so again this weekend.