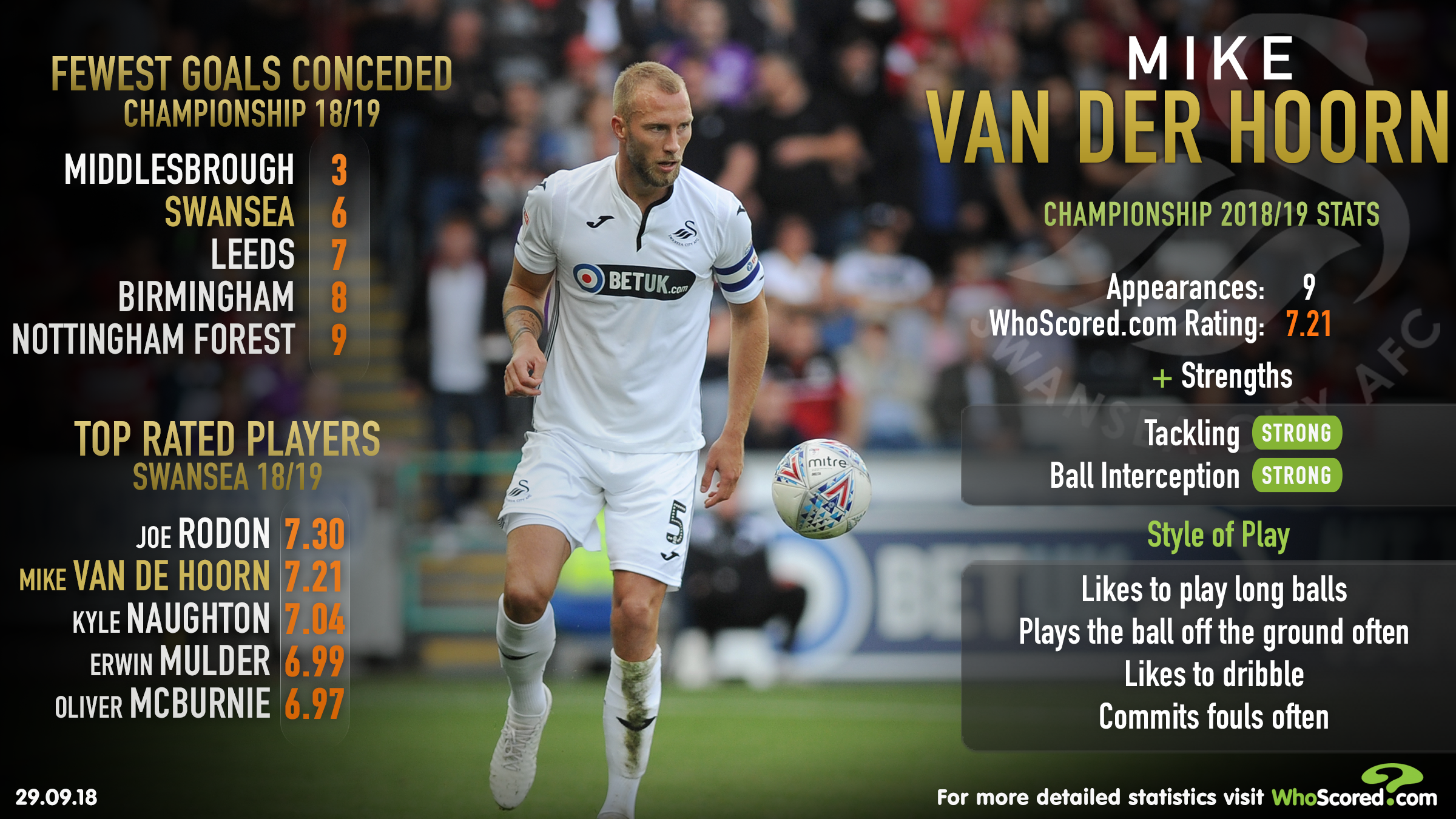 Swansea responded to a 1-0 loss at Stoke with a hard-fought 0-0 draw with Middlesbrough last weekend.

Tony Pulis’ side huffed and puffed but were unable to blow the Swans away as they maintained their defensive resilience to come away from the Riverside Stadium with a positive result.

The Swans will hope to follow that hard-fought stalemate up with a win when they welcome QPR to the Liberty Stadium.

The stats suggest it is unlikely that Swansea will concede today - only Middlesbrough (three) have shipped fewer goals than Graham Potter's team (six) in the Championship this season, with their solid resolve crucial at present.

They’ll look to maintain this solidity in front of their own fans this afternoon against a QPR side who have scored just three times away from home in England’s second tier this term.

A vital reason for their solidity has been the form of Dutch centre-back Mike van der Hoorn. Indeed, his WhoScored.com rating (7.21) is second only to centre-back partner Joe Rodon (7.30) of all Swansea players, with van der Hoorn looking to follow up his performance at Boro last week, where he landed a WhoScored.com rating of 8.05, with another strong display against Steve McClaren’s side.

QPR have developed a WhoScored.com weakness of ‘finishing scoring chances’, which certainly bodes well for Potter’s side. It’s for this reason that the Rs are lingering above the relegation zone, with only Rotherham and Ipswich (both six) having scored fewer goals than the Londoners (seven) in the Championship this season.

With van der Hoorn ranking top for clearances per game (8.3) of all Swansea players this term, the proactive, no-nonsense approach to defending means QPR’s goalscoring woes may continue today.

It may not be pretty, but given the goals against column is so low, it’s certainly an effective route to defending and van der Hoorn is unlikely to detour away from this approach against QPR.

It won’t be a walk in the park for van der Hoorn, however, and he’ll need to keep his wits about him in order to come away with another clean sheet this weekend.

Nakhi Wells is yet to score for QPR following his recent arrival, but the 28-year-old has impressed, providing an assist for one of three away goals they have netted this term. His WhoScored.com rating (7.04) is second only to Joel Lynch (7.52) of all QPR players and with a return of three shots per game the most of all QPR players, it’s only a matter of time before Wells nets for the first time.

If van der Hoorn and his defensive team-mates play to the standards expected of them today, though, another clean sheet and a positive result is the likely outcome.

Tickets for the home fixture against QPR are available – get yours HERE or call the ticket office on 01792 616400. Watch the game in style in our 1912 Heritage lounge – contact the dedicated hospitality team on 01792 616628 or on hospitality@swanseacity.com