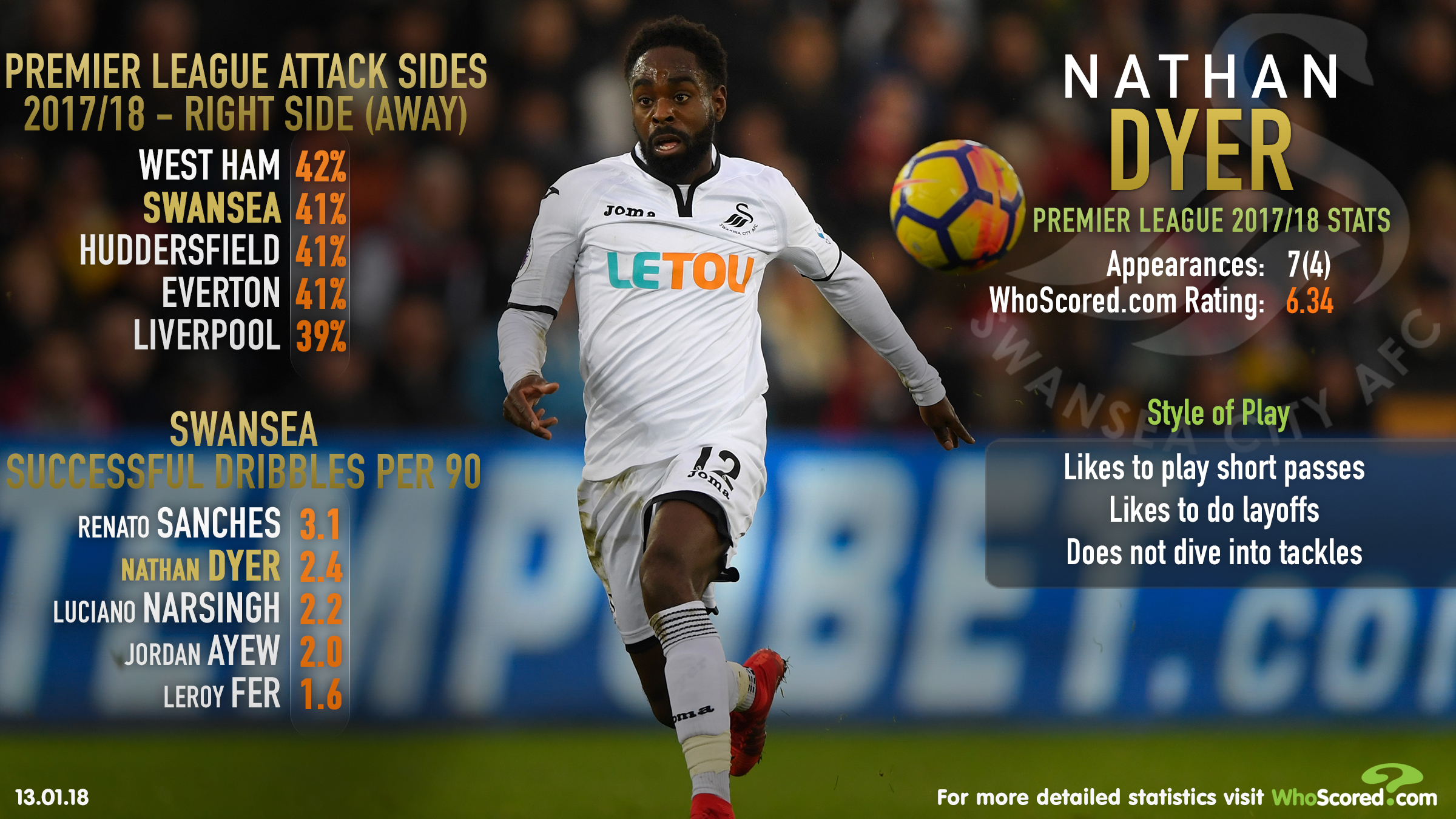 Football stats experts WhoScored.com focus on Nathan Dyer as they look ahead to Swansea City’s Premier League game at Newcastle United this afternoon.

Having forced Wolves to an Emirates FA Cup replay after a 0-0 draw at Molineux, the Swans should travel with some confidence as they make the lengthy trip to St. James’ Park today.

Swansea are unbeaten in four of their last five Premier League meetings with the Magpies in Newcastle, winning three, which should also boost morale ahead of a tough tie with Rafa Benitez’s side.

Newcastle have struggled on home turf of late, having failed to win their last six home league matches – only West Brom (10) are currently on a longer winless run in front of their own fans in England’s top tier.

Benitez’s team have failed to score in five of those six matches, so a clean sheet is a very real possibility for Swansea this afternoon.

At the other end of the pitch, a Swansea wideman has a key role to play in Newcastle.

What’s more, only West Ham (42 per cent) have focused their attacks down the right flank more than Swansea (41 per cent) in away games in the Premier League this season.

With the onus on stretching the home side, Nathan Dyer could play a key role.

The 30-year-old operates best on the right flank, with four of his seven Premier League starts this season coming on that side of the pitch.

Dyer (2.4) is second only to Renato Sanches (3.1) for dribbles per 90 of all Swansea players in the Premier League this season and his directness out wide will peg Newcastle back as and when the wideman gains a head of steam.

What’s more, a return of 0.4 accurate crosses per 90 is a respectable one for Dyer, who can get to the byline to put the ball into the box for a team-mate.

Should Newcastle struggle to keep the winger in check, Dyer could be the main man to help put Benitez’s defence to the sword.

Dyer is expected to face up to Javier Manquillo should he start today, with the Spanish full-back a commendable performer under Benitez.

Manquillo is being dribbled past just 0.7 times per Premier League game this season, one of the better returns for Newcastle, and Dyer will be up against it should he come up against the 23-year-old full-back.

Provided the Swans man can overcome Manquillo, however, Swansea’s chances of maintaining their good record at Newcastle will be good.