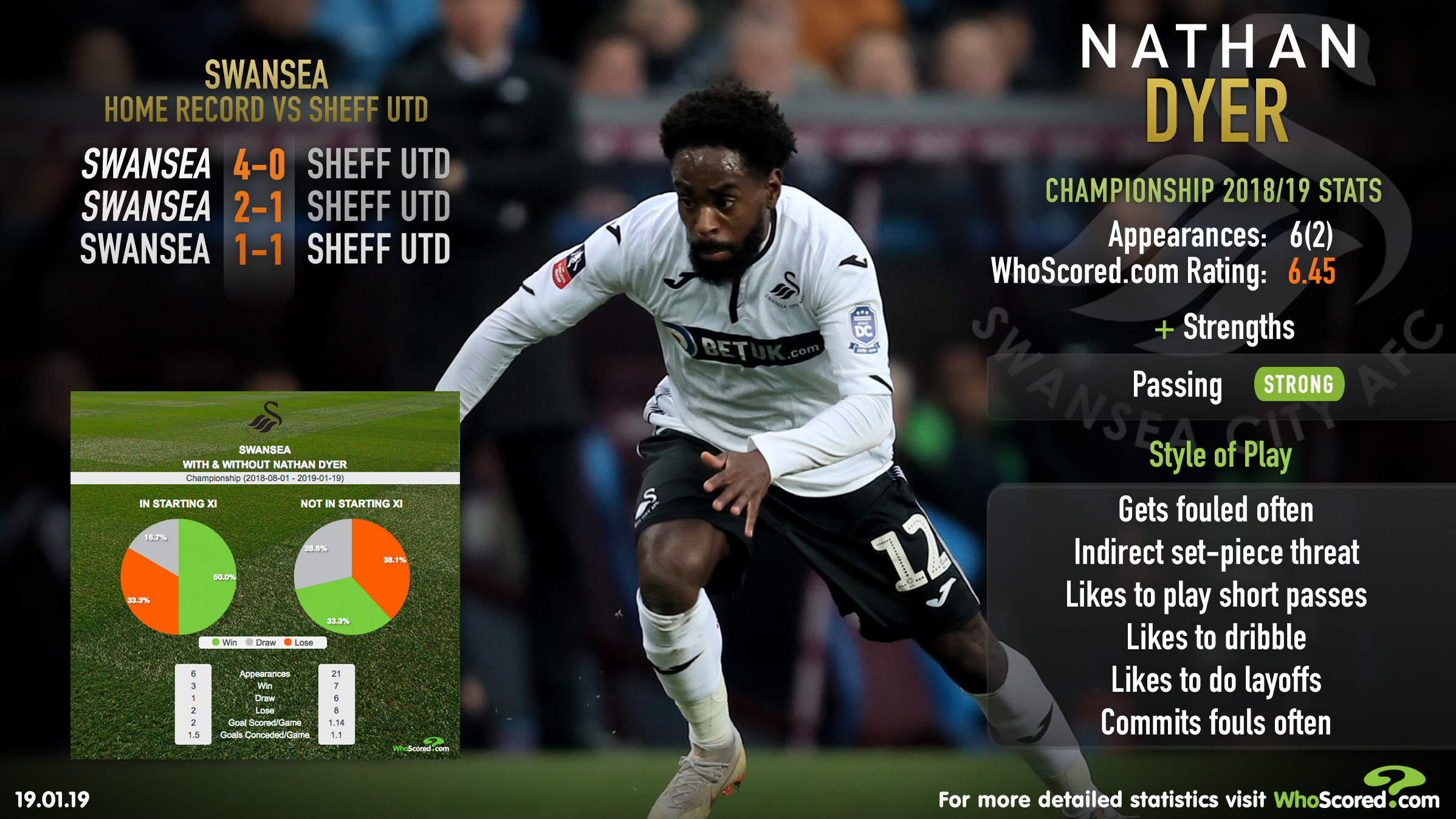 Swansea were unfortunate not to come away with all the spoils at Preston last weekend as they largely dominated the match at Deepdale.

Courtney Baker-Richardson opened the scoring for the Swans before Daniel Johnson equalised five minutes later to secure a 1-1 draw.

Swansea can consider it two points dropped, but it now means Graham Potter’s side are unbeaten in their last four and WhoScored.com believes they have to draw on their good form to overcome Sheffield United this evening.

The Blades have been in flying form of late, winning their last four league matches to surge back into the automatic promotion spots. Unbeaten in five on the road means Sheffield United will come to the Liberty Stadium expecting all three points, but you can be sure Swansea won’t make things easy for Chris Wilder’s side in south Wales.

Indeed, Swansea are unbeaten in their last three home league meetings with Sheffield United, winning two, including a resounding 4-0 triumph the last time these two met at the Liberty Stadium.

Having landed a 2-1 win over the Blades on the opening weekend of the campaign at Bramall Lane, Swansea should be confident of doing the double over Wilder’s team, despite the visitors’ recent good form.

One player who has recently returned to the first-team fold is Nathan Dyer and Potter will hope the wideman can repay the faith shown by his boss with another fine showing in this evening’s game.

The 31-year-old netted his first goal of the season in their FA Cup triumph over Aston Villa earlier this month and he’ll be looking to add to that against a Sheffield United side that have kept just two clean sheets in their last seven away league matches.

When Dyer starts, too, Swansea tend to perform better in the Championship this season. The win ratio increases from 33.3% to 50% when the winger starts, while the number of goals scored per game rises from 1.14 to two when Dyer features from the off for the Swans.

Potter and Dyer’s team-mates will be hoping that run continues at the Blades’ expense.

In the visitors’ preferred three-man backline, we can expect to see Enda Stevens continue at left wing-back and there is again huge importance placed on the 28-year-old to both stretch opponents and contain attackers. With a statistically calculated WhoScored.com strength of ‘defensive contribution’, Stevens’ ability to track back will be essential in keeping Dyer quiet today.

Having developed a statistically calculated WhoScored.com strength of ‘likes to dribble’, though, Dyer has both the ability and experience to get the better of his Blades adversary today and play an influential role in not only ending Sheffield United’s winning run, but extending Swansea’s unbeaten streak.

Having forced his way back into Potter’s thoughts, Dyer now needs to prove he deserves to keep his spot in the XI and a match-winning display this evening will go to great lengths to justifying his selection once more.