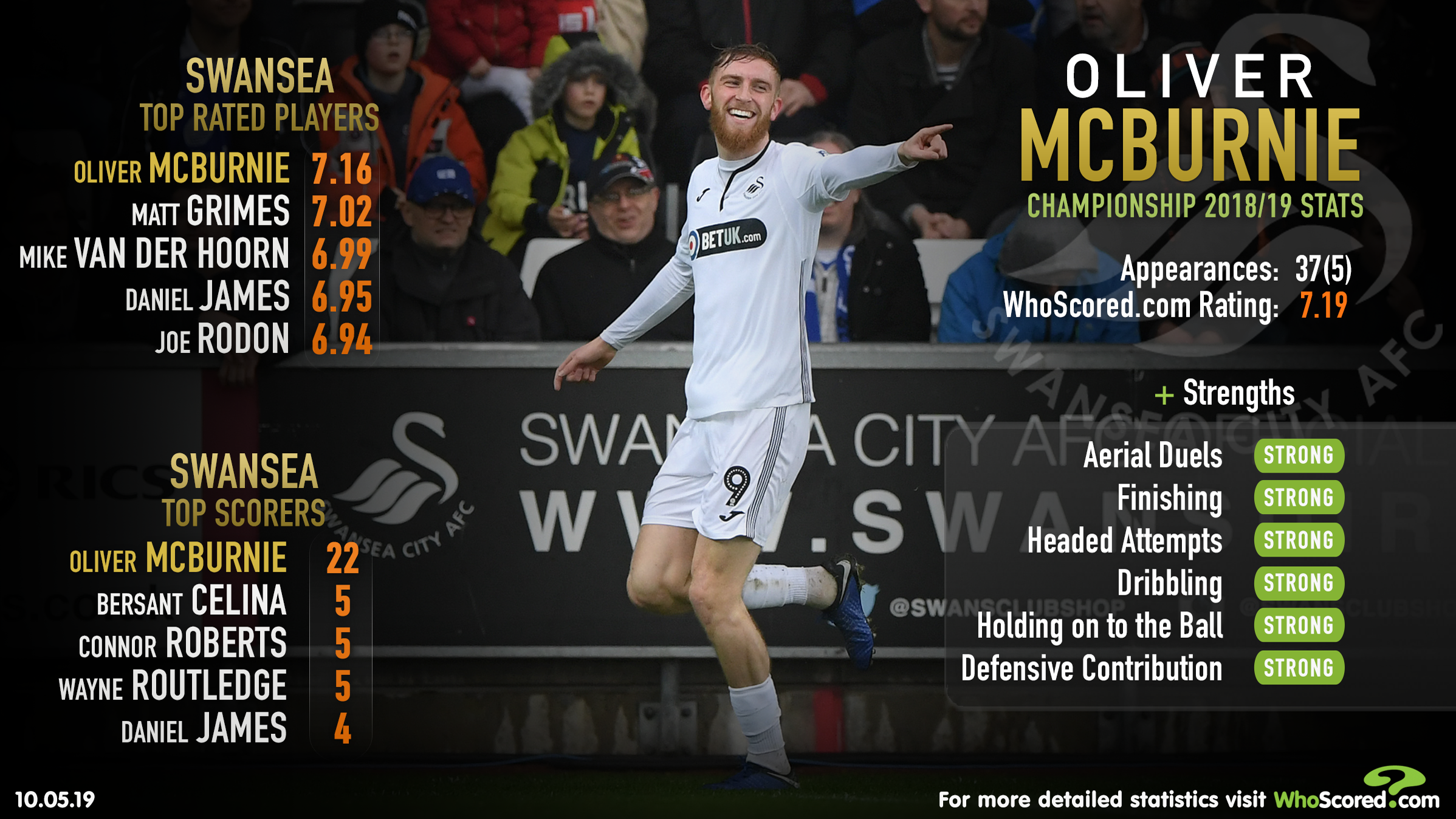 Football stats experts WhoScored.com give us their perspective on Swansea City's 2018-19 campaign.

So there we have it for another season. The play-offs will decide the third and final team to join Norwich and Sheffield United in the Premier League, but for Swansea now is the chance to take stock, return to the drawing board and plan for next season.

Graham Potter made a fine start to life in his debut campaign at the Liberty Stadium helm and, with a clear plan in place, will hope to make a sustained push for promotion and a return to England’s top tier.

Of course, supporters will have hoped for an immediate Premier League return, but the campaign was far from being a disappointment. With a young squad, the core of which Potter will hope can help launch a promotion push, the only way is up for this Swans side who are playing an aesthetically pleasing brand of football.

Indeed, Potter’s patient possession-based approach meant only Leeds (59.7%) saw more of the ball than Swansea (56%) in the Championship this season to reinforce a statistically calculated WhoScored.com style of play of ‘possession football’, while Swansea’s pass success rate (84%) was the best in the league.

Three core central players were key to their efforts to dominate opponents. Matt Grimes (70.8) was top for passes per game in the Championship this season, while defensive team-mate Mike van der Hoorn (63.0) was fifth.

Cameron Carter-Vickers, meanwhile, had a better pass success rate (91.6%) than any other Championship player this season, and was the only one to muster a return in excess of 90%.

Having also quickly bought into Potter’s ideas following his appointment, Grimes (7.02) and Van der Hoorn (6.99) saw their WhoScored ratings among the top three for the Swans, but it no surprise as to who landed top spot.

Oli McBurnie was in rampant goalscoring form for the Swans this season as he netted 22 times in the Championship and registered an additional four assists as he had a direct hand in 40% of their league goals.

The Scot ended the campaign strongly as he scored six times in his final seven league appearances of the season, with McBurnie’s best run of form coming in January as he scored seven goals and registered one assist in four competitive outings at the turn of the year.

That was enough to secure the WhoScored.com player of the month award for January. All in all, McBurnie’s WhoScored.com rating was an impressive 7.19 this season, with his aerial dominance crucial in Potter’s preferred system that required a lone frontman.

Only Billy Sharp (9) scored more headed goals than McBurnie (7) in England’s second tier this term as the Swansea players maximised his aerial prowess, although there is far more to his game than just his strength in the air.

It spoke volumes of Potter’s managerial qualities that he swiftly implemented a style of play that the players quickly took on board, while their versatility and tactical flexibility meant Swansea were one of the more difficult teams to face.

With a squad that boasts an average age of just 25.3 years, the youngsters were only too eager to take on board Potter’s advice and it translated to a number of top performances from the likes of Daniel James, who registered more assists (7) than any other Swansea player in the Championship, Bersant Celina, who was top for key passes (1.9) and successful dribbles per game (1.5) for the team, and midfield playmaker Grimes.

With the backing of the home support, it meant that Swansea had the eighth best home record in the division, earning 42 points from 23 games at the Liberty Stadium, while an 11-match unbeaten run at home was the second longest of its kind in the campaign. There is work to be done on the away record, but the experience garnered this season stands the team in good stead going forward.

This campaign offered much encouragement for Swans fans after a difficult spell and, if the end of season form is anything to go by, they stand to be a force to be reckoned with next term.