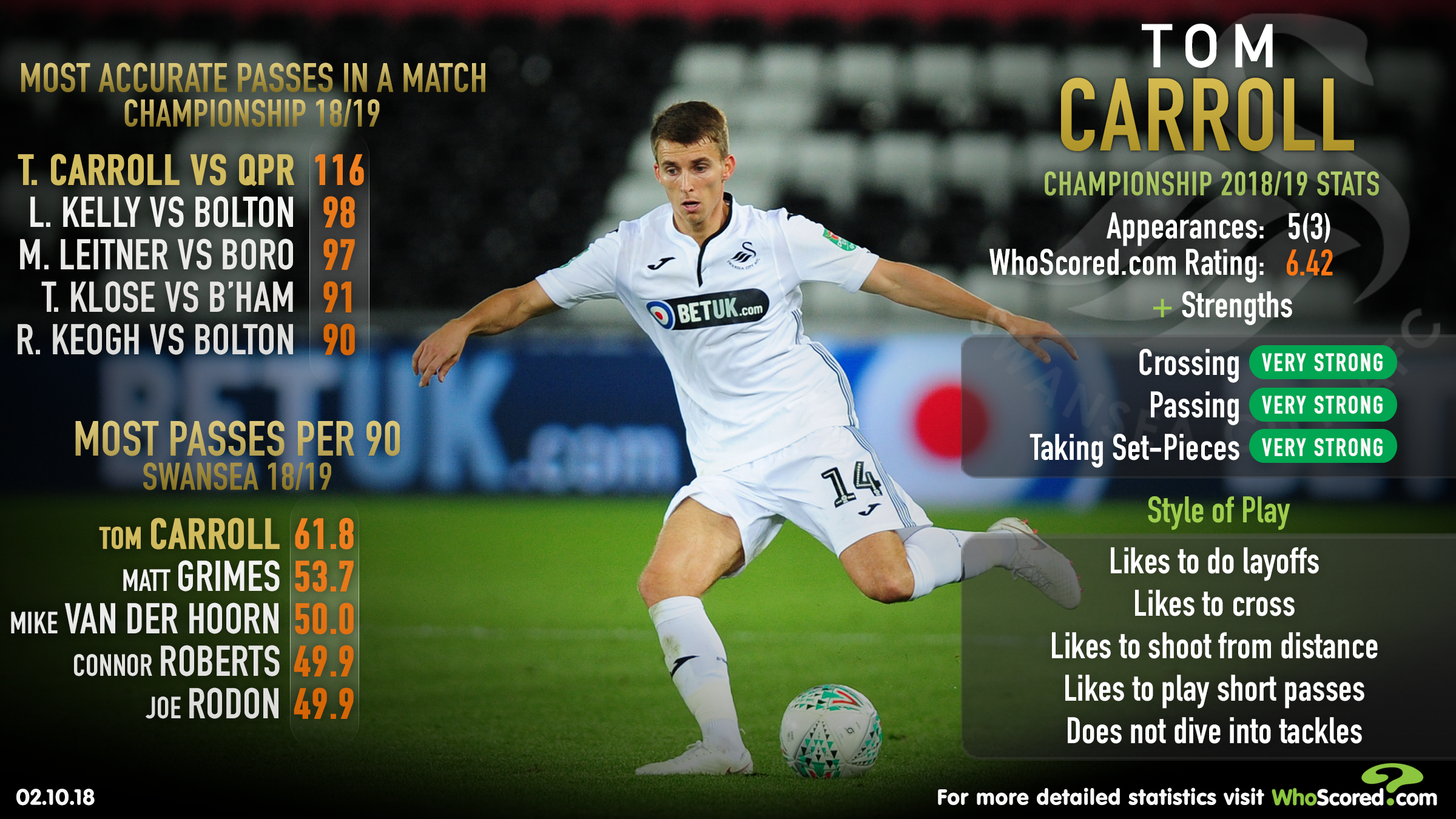 The Swans will hope to draw on the confidence gained from their comfortable win over Queens Park Rangers when they travel to Wigan tonight.

Only Leeds and Sheffield United (both nine) have earned more away points than the Swans (eight) in the Championship this season, so they certainly have the means to pick up a positive result at the DW Stadium this evening.

Wigan, though, are no pushovers on home turf.

The Latics are unbeaten in their five home league matches this term, winning four, with no team taking more home points than Wigan (13) in England’s second tier this season.

Graham Potter may look to the same, new-look system used in the win over QPR.
The set-up allows Tom Carroll to thrive in the middle of the park, with the 26-year-old able to maximise his talent in possession to help open teams up.

Indeed, one of Carroll’s three statistically calculated WhoScored.com strengths is ‘passing’, which is deemed very strong and for good reason too.

He is averaging more passes per 90 minutes (61.8) than any other Swansea player this season, while his tally of 116 accurate passes in the win over QPR was the most by any player in a Championship match this term.

In fact, Carroll became the first player to make in excess of 100 passes in a league game in the second tier in 2018-19.

With two central midfielders either side of him, Carroll is able to control proceedings and this has a positive effect on this Swansea side.

It’s no surprise that Swansea’s win percentage increases to 60 per cent with him starting from 20 per cent without him starting this season as Carroll is able to set the tempo in matches and maximise his possession-retaining ability to ensure Potter’s side can dominate teams.

His influence in the middle of the park against a Wigan side who are impressive at home, then, could prove key as Swansea seek to maintain their good away form this season.

Keeping the ball away from the Latics attack will ensure Wigan’s top-rated player, Nick Powell (7.14), will be unable to utilise his goalscoring prowess.

Powell has had a direct hand in seven of the 14 league goals Wigan have netted this term, netting four and assisting three in their strong start to the Championship campaign.

Seven of his eight statistically WhoScored.com strengths are focused on attacking, so denying him the opportunity of capitalising his offensive quality will be crucial tonight.

That being said, if Carroll’s passing capability is up to scratch once more, then another solid away result is a distinct possibility for Potter’s side.