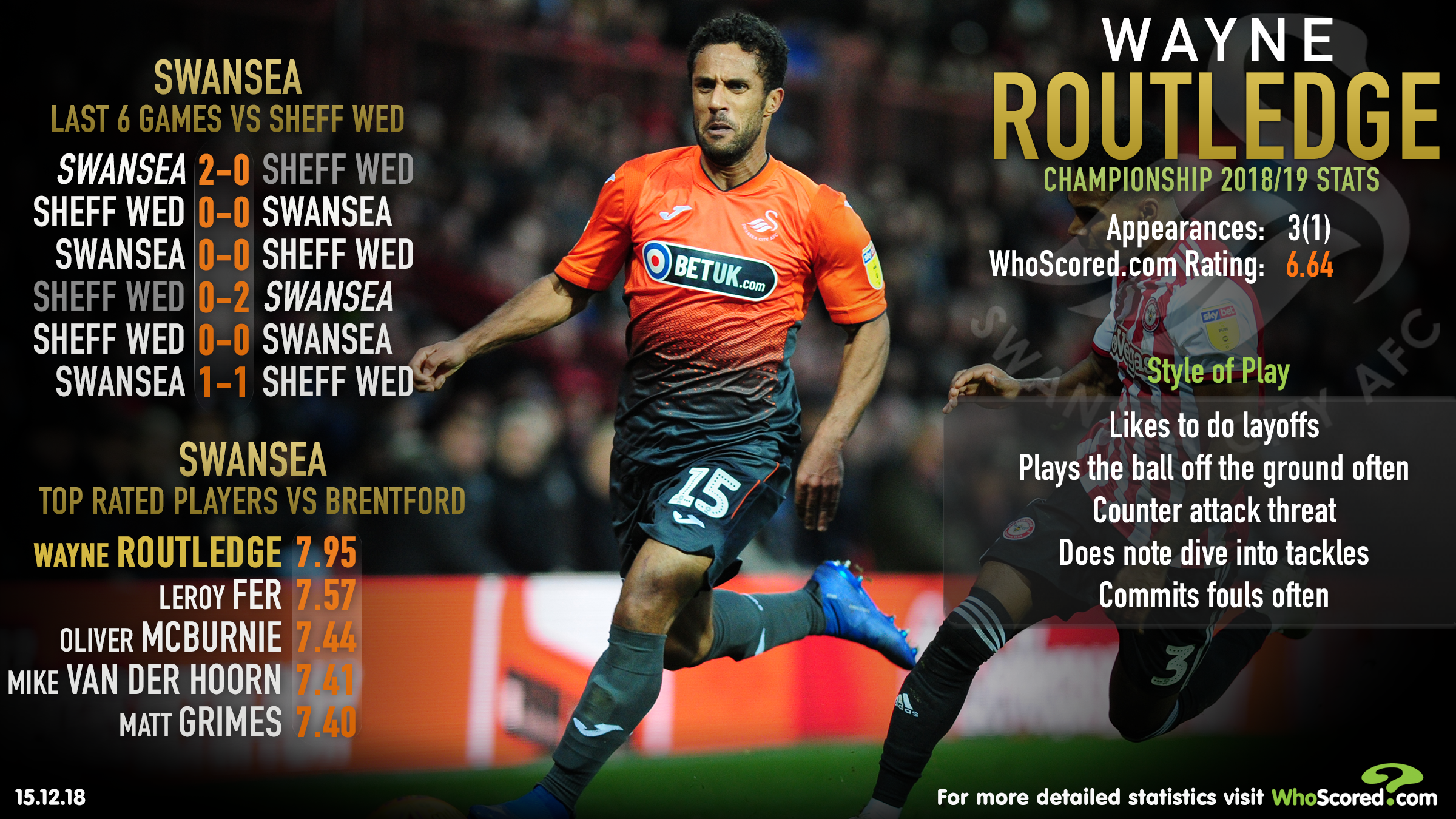 The Swans will be optimistic about their chances of making it back-to-back wins today having beaten Brentford last weekend.

Sheffield Wednesday sit just six points above the relegation zone after a run of only one win in the last nine matches and WhoScored.com believe last weekend’s top-rated player has a key role to play today.

Wayne Routledge secured a WhoScored.com rating of 7.95 in the win at Brentford as he netted the opener after just 33 seconds at Griffin Park last week as he set the Swans on their way to success.

The 33-year-old has proved he has a part to play under Graham Potter, and he will hope to keep his spot in the XI this afternoon.

Swansea boast a fine home record against Sheffield Wednesday and have kept a clean sheet in the last five encounters between the clubs.

Defensively, the Swans will hope to be resilient against a Wednesday side who have scored just 12 away league goals this season and have failed to win their last four matches on the road, losing three.

One of the Swans’ statistically calculated WhoScored.com strengths is ‘attacking down the wings’ and against an Owls side who have a weakness of ‘defending against attacks down the wing’, Routledge has a chance to thrive.

The WhoScored.com match forecast suggests that ‘Swansea will score from a wing play situation’ and if Routledge churns out another display like the one he delivered at Brentford last weekend, he could be a key man.

Only Ipswich (22) and Rotherham (21) have conceded more away goals than Wednesday (20) in the Championship this season and Routledge, along with his attacking colleagues, will hope to add to the Owls’ away-day woes this afternoon.

Wednesday will hope Michael Hector can churn out another big display at the back for Jos Luhukay’s side, with the 26-year-old landing the WhoScored.com man of the match award in the 1-0 win over Bolton at the end of November.

Boasting WhoScored.com strengths of ‘tackling’ and ‘ball interception’, Hector will be an important figure for the visitors.

Routledge, though, has the knack of beating his man and driving for goal and if he can replicate his performance from Brentford, then we could see the Swans close the gap to the top six.