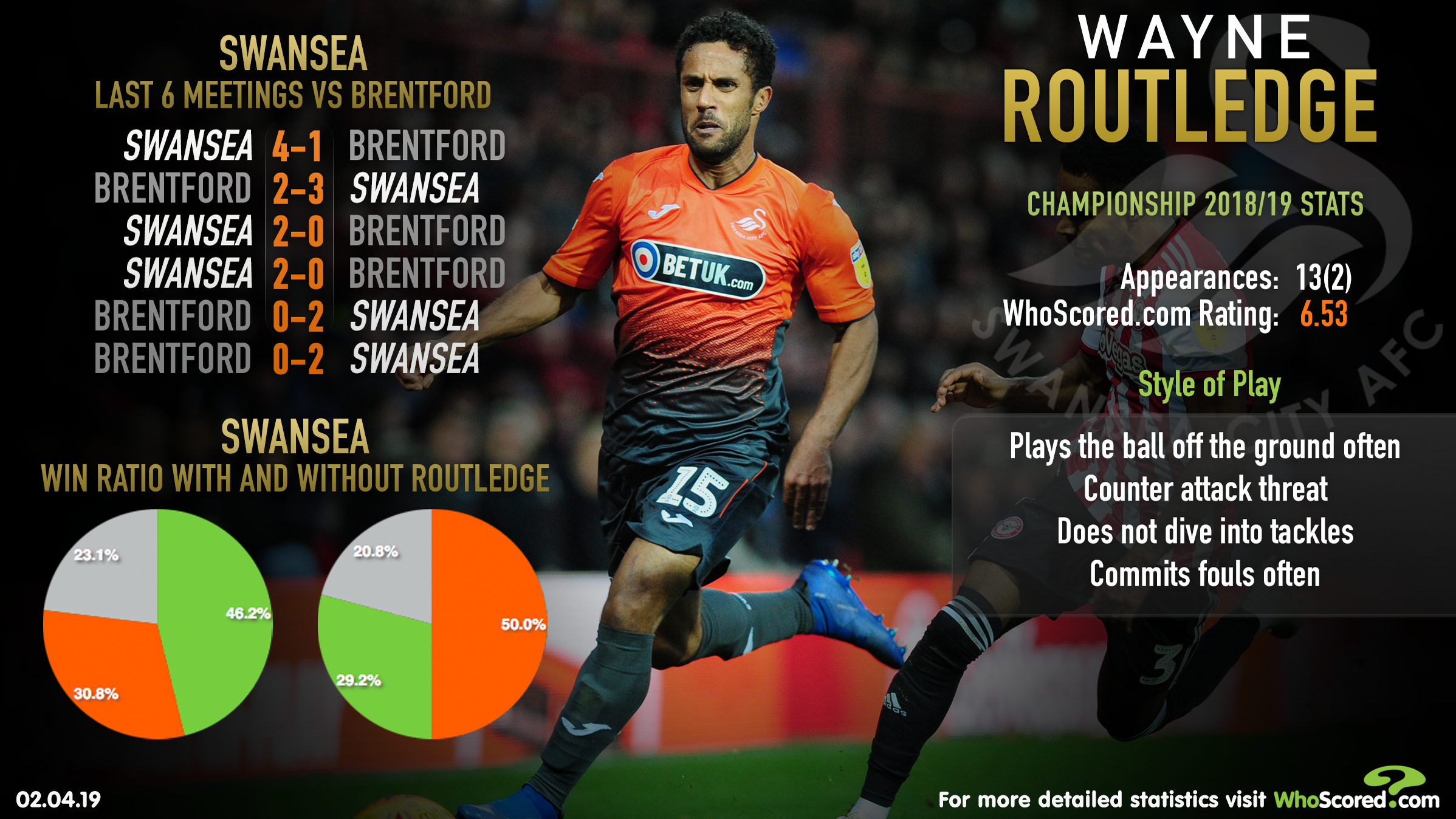 Swansea were desperately unfortunate not to come away from the City Ground with a result on Saturday, but they can’t dwell on the loss to Nottingham Forest for too long as their season continues tonight against Brentford.

Graham Potter will hope to return to winning ways at the Liberty Stadium after their FA Cup loss to Manchester City last time out on home turf.

However, that defeat is their sole loss in their last eight in south Wales and it bodes well for their welcome of Brentford. The Bees have failed to win 17 of their last 19 away league matches, while their record against Swansea is dire to say the least.

Indeed, Swansea have won each of the last six competitive meetings between the two sides, which includes a resounding 4-1 home win over Brentford in the FA Cup earlier this year.

With two games in the space of three days, Potter may take the opportunity to rotate his XI, which could see Wayne Routledge come back into the side.

The experienced winger has made 13 league starts for Swansea this season and the Swans tend to fare better when he features from the off. Swansea’s win ratio increases from 29.2% to 46.2% in the league games he starts, as does the number of goals per game scored, rising from 1.17 to 1.38.

Swansea’s sole statistically calculated WhoScored.com strength is ‘attacking down the wings’ and Routledge, should he be rotated back into the side, could be set for a key role in tonight’s clash at the Liberty Stadium.

A return of 1.9 key passes per 90 is the second best of all current Swansea players this season, so getting the 34-year-old on the ball on either flank could prove to be their most effective route to goal.

Considering Brentford have failed to score in each of their last three league matches, if Swansea can notch an early goal, then their chances of landing a vital three points improves massively.

Routledge has previous against the Bees this season having netted a first-minute opener in Swansea’s 3-2 win at Brentford in December, and a similarly bright start could allow Swansea to maintain their excellent home form as they aim to end the campaign strongly.

It won’t be plain sailing for Routledge tonight, though, and if he, as expected, starts on the left, then Henrik Dalsgaard will be the man tasked with keeping the Swansea winger quiet.

The Danish full-back has landed a WhoScored.com rating of 7.02 in the Championship this season, the third best of all Brentford players, while WhoScored.com strengths of ‘concentration’ and ‘ball interception’ suggests he has the defensive nous to know when to push forward and when to stay back should he start as a wing-back in Brenford’s favoured three-man defensive system.

However, Routledge’s experience is set to shine through on home turf tonight with it no real surprise that Swansea perform better when he starts. Another strong start, as we saw in the reverse fixture, could allow the Swans to get back on track with another three points tonight.