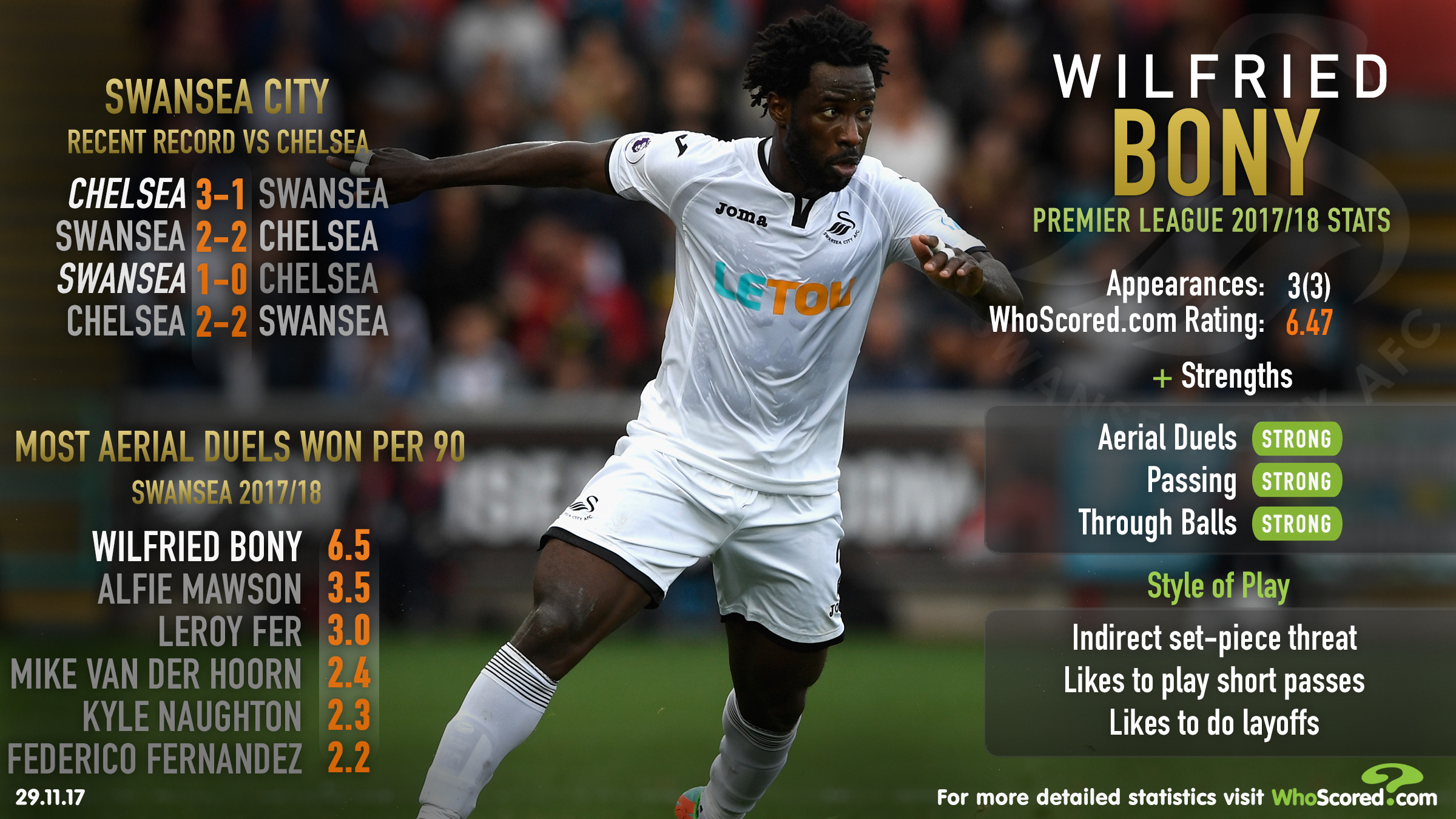 The Swans ensured Bournemouth were unable to make it three successive away Premier League wins on Saturday as they drew 0-0 with the Cherries.

The stalemate provides the Swans with the ideal foundation to build on and they must now try to follow the Bournemouth draw with another positive result tonight.

Of course, a trip to the defending champions is tough to navigate, but the Swans are unbeaten in three of their last four top-flight meetings with Chelsea, winning one.

The Blues were wholly unconvincing in their 1-1 draw with Liverpool at the weekend and it could be that tonight is as good a time as any to upset the odds in West London.

“That’s a big privilege for me,” Wilfried Bony said when he found out he was captain against Bournemouth.

While the Ivorian failed to break down a resolute defence – aside from the goal he saw ruled out – Bony did enough to earn a WhoScored.com rating of 6.64 in the stalemate.

He will now hope to repay the faith shown in him by putting the Chelsea backline to the sword.

With Tammy Abraham unable to face his parent club due to loan stipulations, there is pressure on the 28-year-old to hurt the Blues defence.

His physical qualities are expected to really test Chelsea, with one of his three statistically calculated WhoScored.com strengths of ‘aerial duels’ expected to be a key asset in the capital.

Bony is strong in the air and this works in the Swans’ favour against a Chelsea side who have gained a statistically calculated WhoScored.com weakness of ‘aerial duels’.

If Bony is not scoring, you can be sure he will give the champions’ defence a rough 90 minutes this evening.

Given that Chelsea have also developed weaknesses of ‘defending set-pieces’ and ‘avoiding fouling in dangerous areas’, Swansea’s best route to goal could be to maximise Bony’s ability in the air, be it for the forward to test Thibaut Courtois or to set up team-mates.

While much has been made of Cesar Azpilicueta’s strong defensive showing at Anfield on Saturday, Swansea boss Paul Clement may look to exploit Bony’s

height up against the highly regarded Spaniard.

As good as the defender may be, there is a way to capitalise on his standing and it could be that Clement instructs his players to play direct to ensure Bony has the better of his Chelsea counterpart.

Bony is winning more aerial duels per 90 (6.5) than any other Swansea player in the Premier League this season and maximising this trait will certainly benefit the visiting side tonight.

If Bony can dominate in the air, then the Swans could well come away from Stamford Bridge with a share of the spoils, at the very least, tonight.