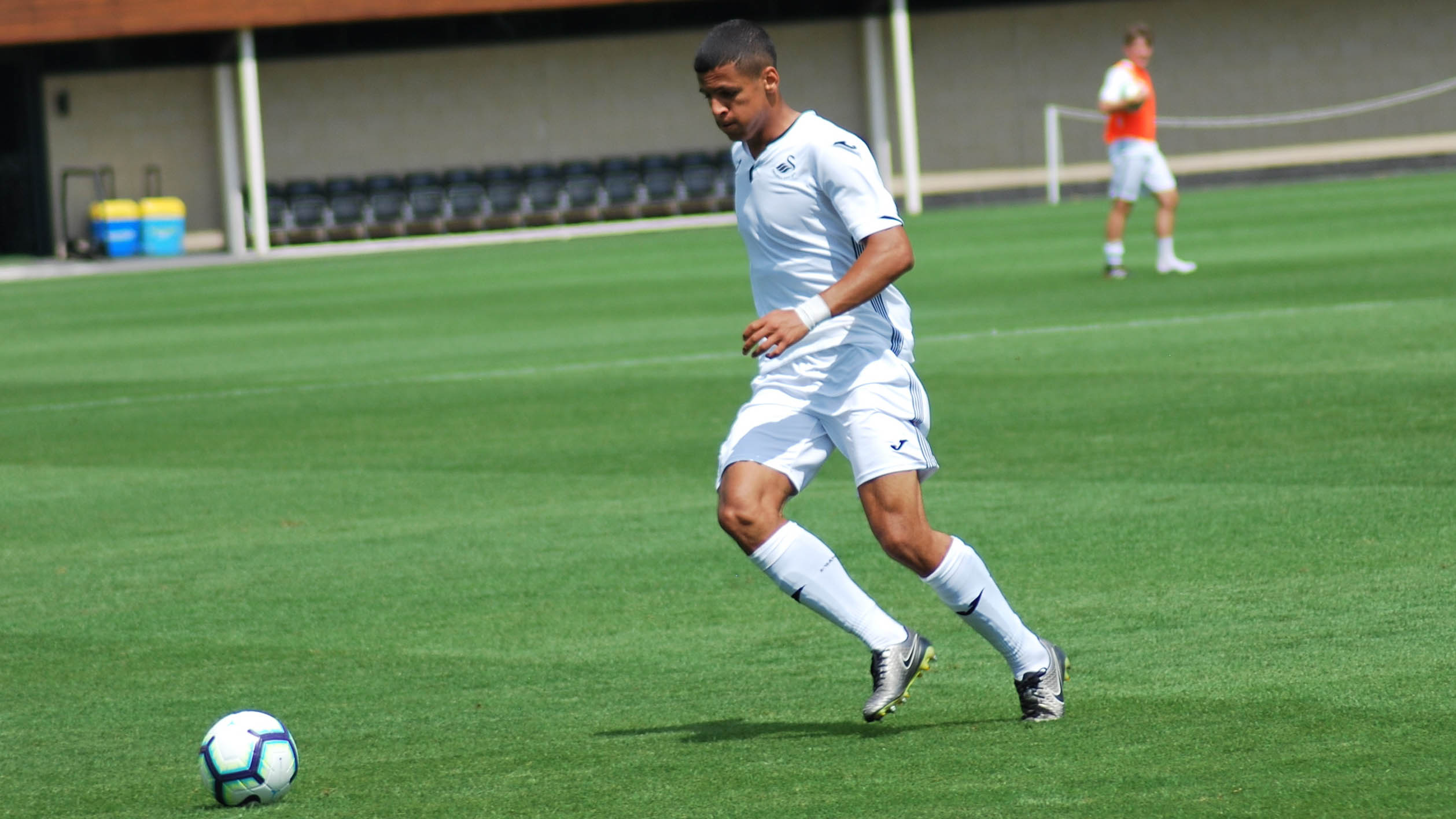 When Ali Al-Hamadi’s persecuted family fled the Saddam Hussein regime and war-torn Iraq, it was a decision the then-infant would have had no comprehension of.

However, as he glances around the multi-million-pound facilities at the Landore Academy over a decade-and-a-half on, the Swansea City Under-18s striker is fully aware of just how pivotal a decision it has proven to be in his young life.

The Al-Hamadi family fled to the safety of England during the early stages of the Iraq War in 2003, it would be eight years before the final US troops would leave the country.

His father Ibrahim had already been rounded up and imprisoned alongside a number of others peacefully protesting against the dictatorship, and he and wife Asseel Mohssen felt there was only one option to take to ensure their safety as a family.

“My dad was a prisoner when Saddam Hussein was in power,” explains Al-Hamadi, who was just one at the time of his parents’ decision to leave the country.

“He was an activist and part of a peaceful protest against the dictatorship within the nation. One day, he and other members of the group were raided and taken to prison.

“From there, they wrote to the Iraqi embassy in the UK explaining the situation and were subsequently released and ended up coming here.

“At the time, there were a lot of people coming over because of the war.

“My dad fled to try and start a new life because he wanted the best for us. He came over on his own at first to make sure everything was okay and the rest of us – me, my mother and my aunties – followed soon after.”

The Al-Hamadi family set up home in the Toxteth area of Liverpool.

As with so many families fleeing warfare and conflict, they had to start from scratch and make a new start, with the first task being to provide for each other.

Al-Hamadi’s father was training to become a lawyer prior to the family’s move to England, but subsequently had to restart his studies at Staffordshire University.

Unable to break into the legal field, he took on several part-time jobs to make ends meet.

Meanwhile, Ali had to work very hard himself to ensure that he remained on the right track in life and away from temptation, and ensure the sacrifices made by his family did not go in vain.

They were challenging times, but football was one area of expression Al-Hamadi quickly grew to love in an area where the game dominates the sporting landscape.

“My dad made a lot of sacrifices to make sure we weren’t left out,” he says.

“Whether it was Christmas or birthday presents, he always made sure I had something like all the other children at school.

“Around Toxteth, a lot of people get caught up in drugs and violence. There were times when I nearly dropped into it because of hanging around the wrong people, but I came through it.

“From secondary school onwards, I told myself not to get involved in any of that business and focus on my football.

“I’ve played football for as long as I can remember. I used to go out on the streets all the time and put two jumpers down as goalposts, or do keepy-uppies.

“It was always an escape from what was happening in the local area.”

His talent did not go unnoticed. The young striker was a regular goalscorer at local level and his talent meant he was often tasked with playing in higher age-groups.

He eventually caught the eye of Tranmere Rovers, who signed him at the age of 14.

The striker initially struggled making the step-up to academy football but, through hard work and dedication, eventually found his feet and progressed to the youth team, where he scored a hugely respectable 12 goals in 15 appearances last season.

“It was quite a late time to join an academy and it was difficult at the start because I wasn’t on-par with the rest of the boys,” he reflects.

“I used to go to the gym every day and practice different aspects of my game.

“Thankfully, all my hard work paid off because, when I got to the under-15s, I started to gain more confidence.

“I then got promoted to the youth team and kept my place thereon.”

Al-Hamadi’s goalscoring feats led to several clubs chasing his signature last summer, but he admits it did not take him too long to make his mind up.

Impressed by the set-up and believing it to be ideal for his progress, he put pen-to-paper on a two-year scholarship with the Swans.

“I had a great time at Tranmere but, at the end of it, I felt like I needed to challenge myself more,” he says.

“I felt like I’d achieved as much as I could at that level.

“The reason you move is because there is a better opportunity and you want to progress.

“Swansea were the first Category One academy I looked at and I liked it straightaway.

“Everyone’s friendly and it is very much a family club. I really like how they bring players through the academy, too.

“I thought it was the best place for my development and that’s what sold it to me.”

The striker also enjoyed a very successful summer off the pitch, too.

The footballing route is an unprecedented one when it comes to the history of the Al-Hamadi family, but that does not mean he is anything less than dedicated to his studies.

And his GCSE results – including four A*s. four As and a B – hint at a young man who has interests beyond the beautiful game.

“My GCSE period was the most stressful three months of my life!” he laughs.

“I started revising quite late so, every day, I’d stay up until 4am or 5am and be struggling to stay awake!

“It was worth it, though, just to make sure I got through all my subjects.

“My family value education more than football, so getting a full-time scholarship was quite different for them.

“In their minds, they’ve always had a pathway for me in terms of having a good education, going to university, getting my degrees and getting a job.

“So, I’ve taken an unusual path but my father has always told me that, so long as I keep my education on track, he doesn’t care what I do.”

However, while football remains a major focus, he has other avenues he would consider pursuing as he progresses.

“I’ve always been into science and I really like physics,” he explains.

“I like to know how things work – that’s how my brain has been wired since I was younger. Growing up, I used to ask questions all the time.

“I like studying about religion as well. It’s an area that interests me.

“If I didn’t play football, I’d probably be involved in something to do with that.”

Back on the field, similarly to when he joined Tranmere, Al-Hamadi initially struggled with the increase in demands of Premier League South during the first year of his scholarship.

He then suffered a setback when he sustained a stress fracture in his pelvis that ruled him out until the start of March.

However, the 17-year-old has come back strongly following his rehabilitation.

He scored his first goal for the under-18s in their 6-0 thrashing of Norwich City earlier this month and, just a couple of weeks later, came on as a substitute in the under-19s’ FAW Youth Cup final victory over TNS.

“This season was a massive jump for me and I wasn’t getting into much of a rhythm,” says Al-Hamadi, who will be hoping to help the under-18s finish off a challenging season on a high when they face Aston Villa at Bodymoor Heath on Saturday.

“As soon as I started to see some development, I was hit with an injury.

“It was annoying but I worked hard during my rehab and have come back to play a few games since.

“Scoring against Norwich was a great moment for me. It was quite a special goal because it had a mix of everything I’ve been working so hard on this year – from the movement, to the touch and the finish.

“This season has been about learning the craft of this level. Hopefully, next year, I can push on and score more goals to help the team.”

Al-Hamadi, one of the first Iraqi players to feature for a Category One academy,  insists he will not rest on his laurels and continually seek improvement as he looks to push himself to the next level.

And he has certainly been encouraged by the development opportunities on offer at the club, having seen several younger players progress to the first team this season under Graham Potter.

“I’m very dedicated off the pitch. If I’m not with family or friends, I’m always thinking about football and how I can get better – both physically and mentally – through watching my clips from games and just tweaking little things,” he adds.

“I’m quite obsessed with developing myself as a footballer, so I’m confident that I can kick on next season and go on to bigger things.

“You can see younger players getting opportunities with the first team. If I keep performing then, hopefully, the manager will notice me.

“In the years gone by, there hasn’t necessarily been a pathway, but there certainly is now.”

The journey to this point of his football career has certainly not been the well-trodden path travelled by so many young players.

But Al-Hamadi is a man determined to make his mark.

Charlie Veevers has become the latest young talent at Swansea City to sign a first professional deal with the club.