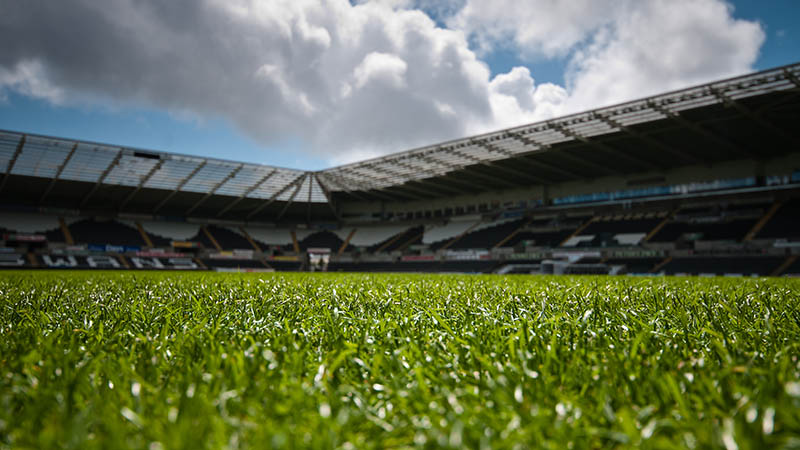 The newly-renovated Liberty Stadium pitch will see its first match action this weekend when Swansea City take on Atalanta in their final pre-season friendly.

While the pitch had been renewed every year at a cost of around £30,000, this summer the decision was taken to renew the pitch to base level for the first time since the club moved from the Vetch Field to their new home in 2005.

Over £550,000 was invested in the procedure with the aim of giving Steve Cooper’s side a surface perfectly suited to the Swans’ passing game.

Supporters will get their first glimpse of the new pitch during Saturday’s friendly against Atalanta, while the first-team squad get their first taste of the surface in a training session at the Liberty on Thursday morning.

The original playing surface at the Liberty had lasted for 14 years, which is remarkable given that the traditional lifespan of a base layer is 10 years, and even more impressive when considering the duel demands of football and rugby usage.

Using modern technology, the new surface installed by grounds’ manager Anthony Harry and his award-winning team is designed to remain consistent throughout the season – come rain or sun – and play faster, thus aiding the performance of the Swans as they look to build on a return to a possession philosophy last season.

And that consistency and speed will be the evident even during the wet winter months as an improved irrigation system means excess water can be drained from the pitch with greater ease, and during drier spells the surface can be watered at the flick of the switch.

“I’m confident we have a better surface than ever ahead of the new season,” said Swansea City grounds manager Anthony Harry.

“Because of the way Swansea like to play, it’s vital that we give the head coach and players the best surface possible on which to perform.

“That’s why the club is making such a huge investment to ensure it can deliver at the top level for another 10 to 14 years.”

The Liberty Stadium pitch was voted the best in the Championship last year with the relentless work of the staff recognised once more as they were named Grounds Team of the Season at the EFL Awards.

The surface in SA1 has long been recognised for its quality and praised by visiting players and managers.

Indeed, it received a glowing reference from Manchester City boss Pep Guardiola, who described it as the best his side had played on all season following the FA Cup quarter-final showdown in March.

And to underline the hard work and expertise of Harry and his groundstaff, those comments were made following a game that had at one stage been in doubt due to persistent heavy rainfall.

“It was great to hear such praise from a manager of his calibre,” said Harry.

“I have an outstanding and dedicated team of staff who have enabled us to win numerous top awards for the Liberty pitch over the years.

“That was an extra reward for the staff because, for that game, they had to work overnight to make the pitch playable.

“It was touch and go on matchday and, without their efforts, the game wouldn’t have gone ahead.

“We always thrive to be the best. We never settle with what it looks like; we always want more.”

The entire pitch renovation process – which began shortly after the conclusion of the 2018-19 campaign in May - utilised almost 4,000 tonnes of sand and soil mix while a further 20 million artificial fibres, similar to those used on a 4G pitch, were stitched into the new nylon base layer.

This was installed following the removal of the old grass and surface material.

Then, at the first signs of growth, a new SISGrass system was introduced from the start of July – combining the fibres with traditional grass developed specifically for sports pitches.

All of which means some excellent foundations have been laid at the Liberty; let’s hope the Swans can build on them for a successful 2019-20 campaign.