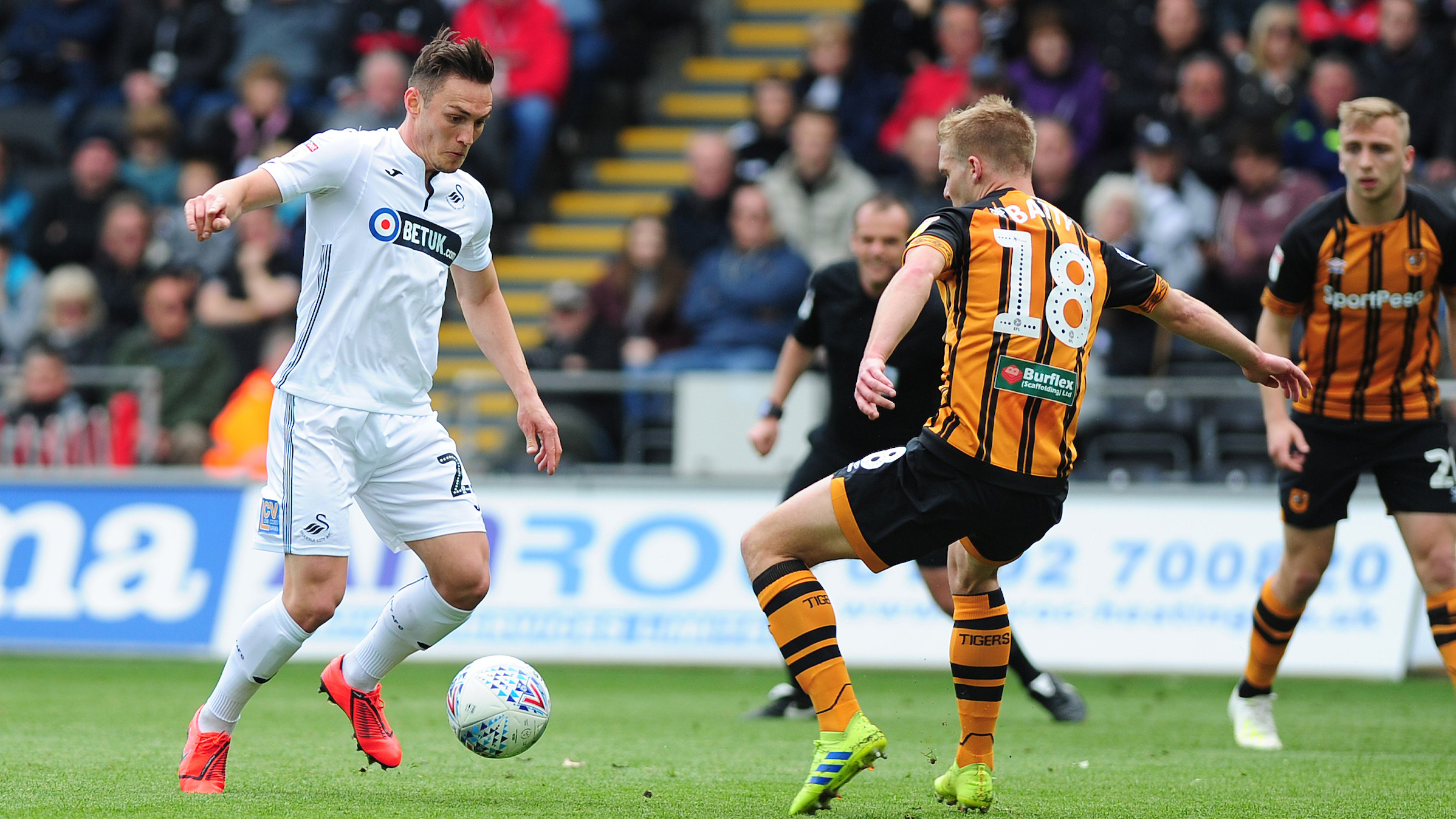 Swansea City saw their Championship play-off hopes ended as they lost a two-goal lead to draw with Hull.

Graham Potter’s men had looked on course for a seventh-straight home victory when OIi McBurnie’s brace had them in the ascendancy.

The Scotland striker turned home Wayne Routledge’s cross for the opener, and then added the second with an excellent header, with Daniel James the provider.

But Jarrod Bowen pulled one back for the Tigers before another close-range finish – this time from substitute Nouha Dicko – levelled matters.

Swans boss Potter had made just the one change from the Easter Monday win over Ipswich as Nathan Dyer came in for Jay Fulton.

Hull, meanwhile, included former Swan Stephen Kingsley in their side.

The Swans wasted little time in getting about their opponents, and could have led inside 30 seconds as McBurnie surged down the left and found Routledge, but the angle was just too tight for the winger and George Long saved.

The hosts also got James into the game early, with the winger testing out Eric Lichaj and Robbie McKenzie during the opening exchanges.

Slick build-up down the other flank ended with Connor Roberts whipping in a cross that Markus Henriksen did well to head clear as McBurnie waited to pounce.

The Swans continued to press, with Dyer’s cross just too high for Routledge and a ricochet just taking the ball away from McBurnie again.

The clearest sign of an opening yet came in the 24th minute as McBurnie knocked a clearance down to Routledge, the winger headed infield but saw his shot blocked to safety.

From the resulting corner, Roberts looked to have beaten Long with a high curling drive, but the keeper just about adjusted to tip it round the post.

Swansea went closer still as a lovely James cross found Routledge, with only a deflection keeping the winger’s header off target.

But the hosts had reason to hold their breath when Kamil Grosicki got in behind and went down as Mike van der Hoorn covered him, the appeals were waved away and the Swans went straight up the other end of the pitch to take the lead.

Routledge was the provider, sliding a perfect low cross along the six-yard box and McBurnie did not need a second invitation to convert his 22nd goal of the season.

Long need to make a sharp save five minutes later as McBurnie met a Matt Grimes free-kick with a strong header.

Hull withdrew Kingsley to send on Brandon Fleming and then they missed a gilt-edged chance to level.

Bowen broke clear and unselfishly laid the ball on to Grosicki, but the Poland international fired well over with only Kristoffer Nordfeldt to beat.

Jackson Irvine then volleyed right at the Sweden international during a better spell for the Tigers.

The hosts had not really come out of the traps at the start of the second period and Potter introduced Fulton in place of Dyer just past the hour to try and regain some control of the contest.

And within seconds of his arrival the Swans had doubled their lead.

James left Lichaj for dead down the Swansea left, and his pinpoint cross was clinically finished by McBurnie.

James so nearly broke clear for a third until Kevin Stewart covered across to head the ball to safety.

At the other end Cameron Carter-Vickers blocked a Bowen strike after the dangerous forward had cut inside onto his left foot and the visitors pulled a goal back with 13 minutes to play seconds later.

Bowen prodded home after Swansea failed to fully clear a corner despite having numerous chances to do so.

It set up a nervy final period with Routledge just unable to beat Long after good work by George Byers and a lovely floated pass from James.

And it proved costly as Hull levelled through Dicko after fellow substitute Jon Toral produced an excellent cross to the far post.

With the Swans needing a goal to keep themselves in the top-six hunt, Bersant Celina and Barrie McKay were sent on.

They so nearly found a winner in stoppage time but Fulton’s header was cleared off the line.