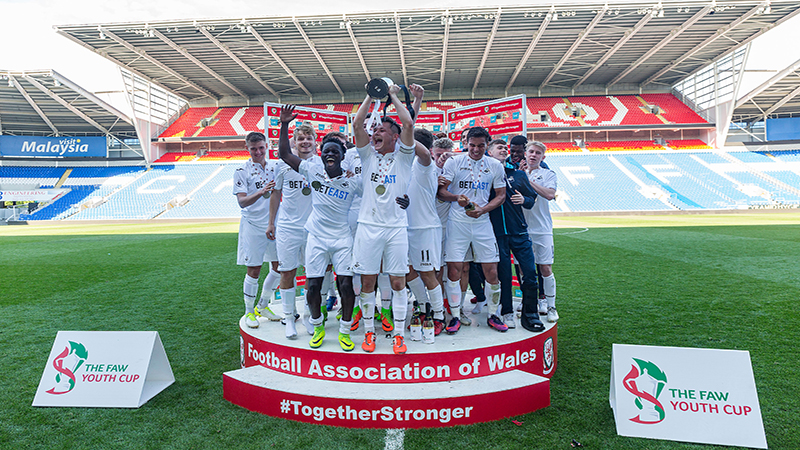 The Swans were reduced to ten men as Tom Price picked up a second yellow card in the second half, but despite their man disadvantage they took the lead through Causso Darame's 30-yard shot during the first minute of extra-time.

Liam Edwards' neat finish doubled the Swans' lead and ensured they retained the youth cup for a record 17th time in their history.

The young Swans had scored 23 goals in four games en route to the final while Welsh League side Cambrian and Clydach were looking to make history in their first FAW Youth Cup final.

Oliver Cooper had Swansea's first chance on goal inside the first minute, but his shot was saved by Cambrian keeper Morgan Davies.

Minutes later Matt Blake's cross from the left found Causso Darame in the box, but the winger's effort sailed narrowly over the bar.

Cooper saw his shot blocked inside the area by Kyle Jones soon after as the young Swans searched for their opening goal inside ten minutes.

Cambrian made it difficult and continued to frustrate the Under-19s in the first half as midfielder Jack Evans saw his 20-yard shot saved before Davies kept out Blake's low free-kick.

Winger Darame saw his low shot saved before Cullen's neat turn inside the area saw the young striker almost find the back of the net.

Blake broke into the box and fired a powerful shot inches over the bar minutes before the break with the score goalless at half-time.

Swansea continued to search for the opening goal minutes after the restart, but it was Cambrain who had the best chance as striker Cameron Keetch's long-range strike rattled the crossbar.

The young Swans responded with efforts from Cullen and Darame, however Cambrian continued to frustrate and gained confidence in their play as Keetch's half-volley fell narrowly wide of the target.

The afternoon was made harder for Swansea in the 68th minute as they were reduced to ten men when Tom Price picked up a second yellow for a soft foul on winger Elijah Chilekwa.

Swansea did not give up their attacks in Cambrian's final third as Cullen almost capitalised on Davies' mistake before Blake sent a long-range drive just wide of goal.

The game became stretched in the closing minutes as both sides searched for the vital goal before full-time. Cambrian saw their effort blocked before Cooper raced away with a fast paced counter-attack before it  broke down in the area.

Cambrian could have won the cup in the final seconds of normal time, only for Lewis Thomas to save Carn Thomas' header.

The breakthrough for the Swans came just a minute into extra time as goalkeeper Morgan Davies found himself out of position before Darame fired home a 30-yard drive to give the under-19s the lead.

Cambrian looked to get back on level terms as substitute Jamie Crisp saw his low shot saved by Thomas.

But the game was sewn up in the second half of extra time as substitute Liam Edwards cut in from the left to fire home a neat finish and ensure victory.