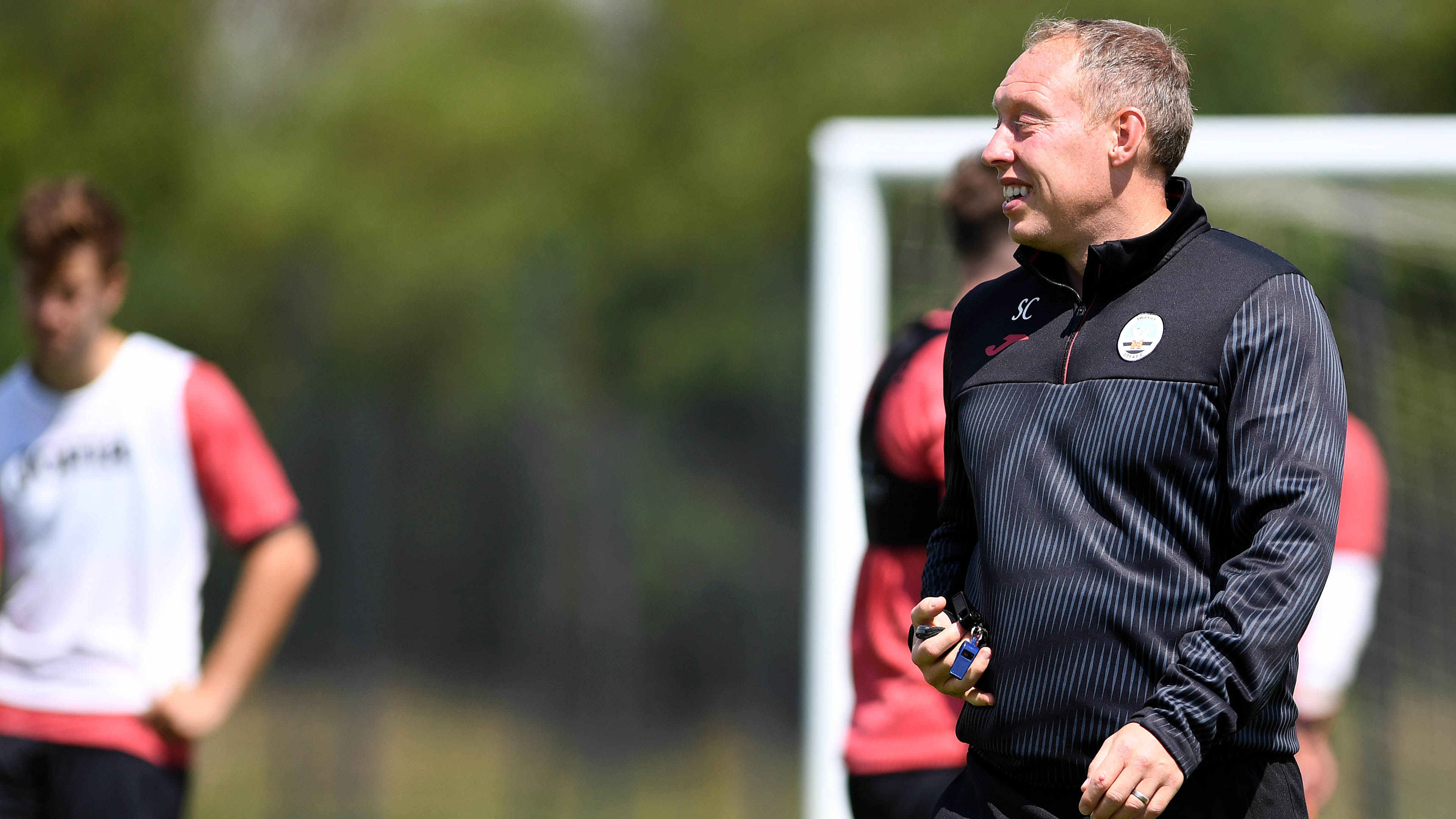 Steve Cooper praised his players for their application after the Swansea City squad stepped up their pre-season campaign this week.

After two 60-minute games against Newport County in midweek, the Swans faced the League Two side again on Saturday, with all games played behind closed doors.

The Swans were due to face Swindon but, with that game being cancelled, another friendly was arranged with Mike Flynn’s side.

And following a pair of wins in midweek, Cooper’s side ran out 5-0 winners at Spytty Park after a brace from Liam Cullen and goals from Ben Margetson, Yan Dhanda and Joel Latibeaudiere.

“This week has been a great exercise for the players,” said Cooper. “It’s the first time we’ve played in pre-season and at this stage it is all about minutes and fitness and conditioning the players, as well as technical and tactical work.

“While it’s good to build fitness, the lads have applied themselves really well – not just this week but ever since they returned at the start of pre-season.

“They all came back in excellent condition. To have the season we did last year in terms of the schedule and the short turnaround from the end of the previous campaign, means the players deserve great credit for how they have looked after themselves over the summer.

“The pre-season fitness tests were extremely positive and from that point it is about getting the players back onto the grass and getting minutes in friendly games.

“Unfortunately, the game we had scheduled against Swindon had to be cancelled, but we’ve had two outings against Newport which have been a great exercise.

“I’ve got a great relationship with Mike Flynn and I’d like to thank them for helping to arrange the second game against them at such short notice.

“We had two 60-minute games behind-closed-doors in midweek which allowed us to get all the lads some minutes under their belts and while Newport changed squads for our second game this afternoon it still proved a good test for us.”

Prior to this week’s friendlies, the Swans squad spent a week at Pennyhill Park in Surrey as part of their pre-season preparations.

“That was a really good week for us,” said Cooper. “The facilities there were first class and it’s easy to see why the England rugby squad have based themselves there for so long and why Premier League clubs have also been spending time there recently.

“It allowed the players to do a lot of work on the pitch while also allowing for a second session most days of strength and conditioning work.

“I must say that the young players who have been with us in pre-season have all applied themselves really well. We had seven lads from the academy who travelled with us to Pennyhill Park, some of who have been involved in the friendlies so far and it’s great experience for them.

“This club is all about giving young players opportunities and it’s also great to see the likes of Ollie Cooper and Brandon Cooper both making great strides in their recovery from injuries.”

After seeing several players depart this summer, the Swans have recruited three players so far ahead of the start of the Championship season.

“The three new boys have all settled in really well,” said Cooper. “Kyle Joseph was with us on the first day of pre-season and Liam (Walsh) linked up with us while we were in Pennyhill Park.

“Joel had to observe a period of isolation after his move from Holland but has now trained with us a few times and he’s excited about the season ahead.

“All three players have made a good impression with the group both on and off the pitch and just need the minutes under their belts now.”

The Swans squad now head to the south west ahead of Tuesday’s friendly against Plymouth Argyle at Home Park (7pm).

Ben Cabango has rejoined the squad after being given extra time off following his involvement in Wales’ Euro 2020 campaign.

“It’s great to have Ben back with us,” said Cooper. “He had an excellent season for us last year and I’m sure he would have learned so much from this summer and being involved in the Euros with Wales.

“Of course it was disappointing for us to lose Connor Roberts to injury, but he’s in good spirits and I’m sure he will come back even stronger.

“Plymouth will be another good game and a good test for the players.”