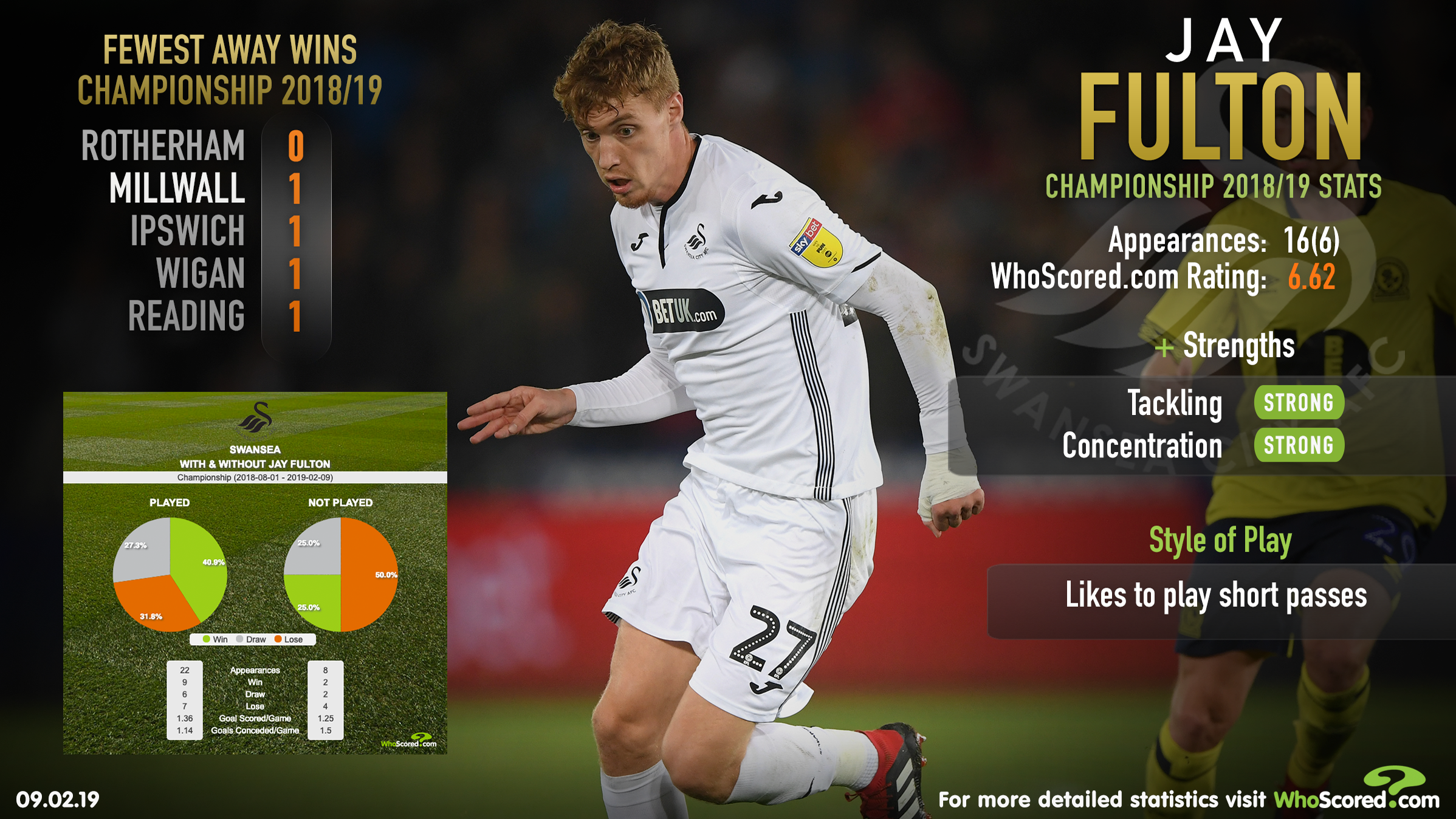 Football stats experts WhoScored.com take a closer look at the form of midfielder Jay Fulton - who it set to make his 50th Swansea City appearance - as Graham Potter's men prepare to host Millwall at the Liberty Stadium (3pm).

Swansea’s unbeaten run came to an end when they fell to a 2-0 loss at in-form Bristol City last weekend, but they have an opportunity to get back on track when they host relegation battlers Millwall today.

The Lions pulled away from the bottom three with a three-match winning run over the festive break, but a recent three-game winless streak leaves them just five points above the drop zone.

Here, WhoScored.com are backing the Swans to get their play-off push on the right path at Millwall’s expense.

Neil Harris has overseen just one away league win this season - only Rotherham (0) have earned fewer victories on the road in the Championship - while seven points from 14 matches is one of the poorest returns.

Their sole away win came at Championship basement team Ipswich, and against a Swansea side that is unbeaten in four in south Wales, so their challenge to return to winning ways doesn’t get any easier this afternoon.

Swansea have a fine record against the Lions, too, with the Swans losing only one of their last six meetings between the pair, winning three, and are unbeaten in their last three, winning the last two.

One of those was the hard-fought 2-1 win at the Den back in September as goals from Kyle Naughton and Oliver McBurnie secured all the spoils in the capital.

Despite last week’s setback, Graham Potter should be confident of guiding Swansea to victory this afternoon and crucial to putting three points on the board may be Scottish midfielder Jay Fulton.

The 24-year-old is in line to make his 50th Swansea appearance and should he feature, then it can only be a good thing for Potter’s side.

Indeed, Swansea’s Championship win percentage increases from 25% to 40.9% when he’s featured this season, with the Swans scoring more goals - 1.36 compared to 1.25 per game - and conceding fewer - 1.14 compared to 1.5 per game - when Fulton plays.

Much of the latter quality is due to his defensive resolve, with Fulton gaining a statistically calculated WhoScored.com strength of ‘tackling’. This in part is due to the player averaging 2.7 tackles per 90 minutes in the Championship this season, that one of the better returns of all Swansea players.

With Millwall having scored just 14 away league goals this term, if Fulton can shield the backline with such ruthless efficiency, then Swansea will be looking for a win and a clean sheet on home turf.

Keeping the goalscoring threat of Shaun Williams in check will certainly go a long way to gaining all three points that’s for sure, though. The 32-year-old has scored four league goals this season, a return only Lee Gregory (7) and Jake Cooper (5) can better of all Millwall players.

Williams has a better WhoScored.com rating (7.17) than any other Lions player and if he is able to exert his dominance in the middle of the park, then Millwall’s chances of securing a second away league win of the season increases significantly.

However, Fulton has the means to help Swansea to a defensively sound performance and if the attackers can perform to the standards expected of them, then the Swans can close the gap on the top six this afternoon.