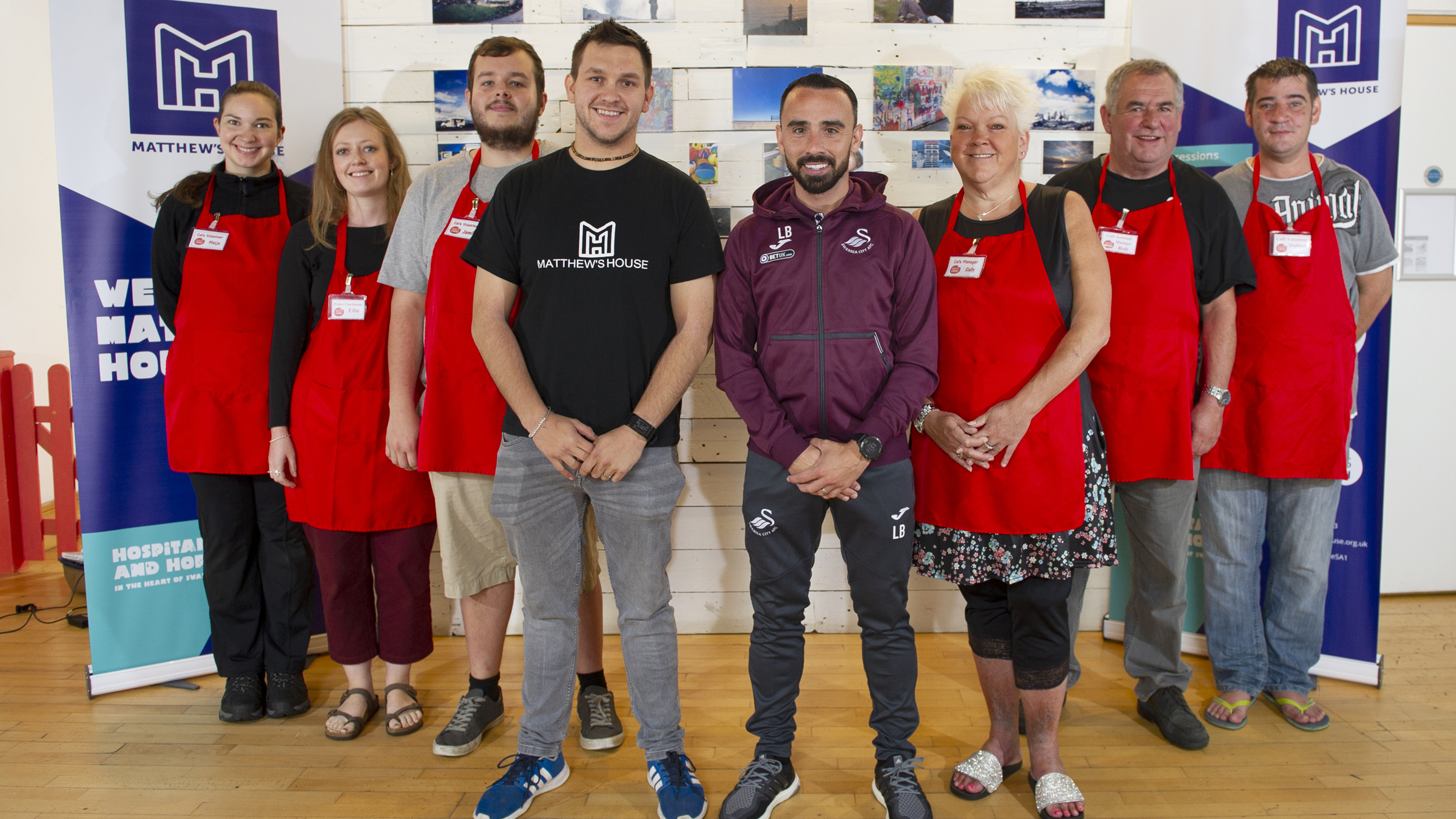 To celebrate World Food Day, Swans club ambassador Leon Britton has signed up to become a ‘friend’ of Matthew’s House.

Based on High Street, near Swansea railway station, Matthew’s House provides a warm and welcoming home in the heart of the city to assist the homeless and most vulnerable in the community.

At the centre of the project is Matt’s Cafe. Run by volunteers, the cafe intercepts donated and perfectly edible food waste from local supermarkets and businesses destined for landfill to turn in to delicious home-cooked style meals available to all, particularly those who are homeless or vulnerable.

Equipped with first-class kitchen facilities, the cafe has a pay-as-you-feel policy which allows people who need food to eat for free.

Matthew’s House was named as one of the club’s designated charities for the 2018-19 season, with Britton agreeing to become the organisation’s first official ambassador.

And now he has signed up to the Friends of Matthew’s House scheme, which helps the charity financially via a monthly contribution.

Britton visited the centre to officially become a ‘friend’ and meet the volunteers and visitors at Matthew’s House.

“I’m delighted to have signed up to the scheme because I’ve seen just how important Matthew’s House is to people in our city," he said.

“I’ve lived in Swansea for a long time now, and it’s clear to see that the community is at the heart of the city and this project is a prime example of that.

“I’ve spoken to a number of people who attend the cafe and benefit from it, and it’s a real help to them not just in terms of a hot meal but the friendships they make.

“It’s a great project and it would be great to see more people becoming Friends of Matthew’s House.”

“Whilst we have received donations from all over the UK to get Matthew’s House started, we know that the only way for the building to be sustained over the long-term is by way of regular monthly support from generous people via Friends of Matthew’s House,” said Lynch.

“This is the most sustainable and cost-effective way of funding, rather than reliance on grants.

“To have the support of Leon and the Swans is such a huge boost to the charity. He has not only become the charity’s first ambassador but he’s now signed up to be a Friend of Matthew’s House, which is a massive help.

“When we first started we had around ten volunteers – now we have 81 – while we were preparing around 40-50 meals a day compared to the 202 meals we made last week, which was a record.

“So that shows the growth of Matthew’s House and how the Friends scheme is vital in help the project maintain itself and continue delivering hospitality and hope along with providing a lifeline for the homeless and others who need it.”

As part of the club’s ongoing support, there will be Matthew’s House collection boxes placed throughout the stadium for the rest of the season.

Matthew’s House also offers hospitality and hope in other areas apart from the Matt’s Cafe project, which had already served over 18,000 meals in its 18-month life.

Ongoing projects also include a shower and laundry room, lounge and 1-2-1 buddy service and meeting rooms, plus an auditorium for community help groups with a commitment of making the facilities available to those who need them the most.