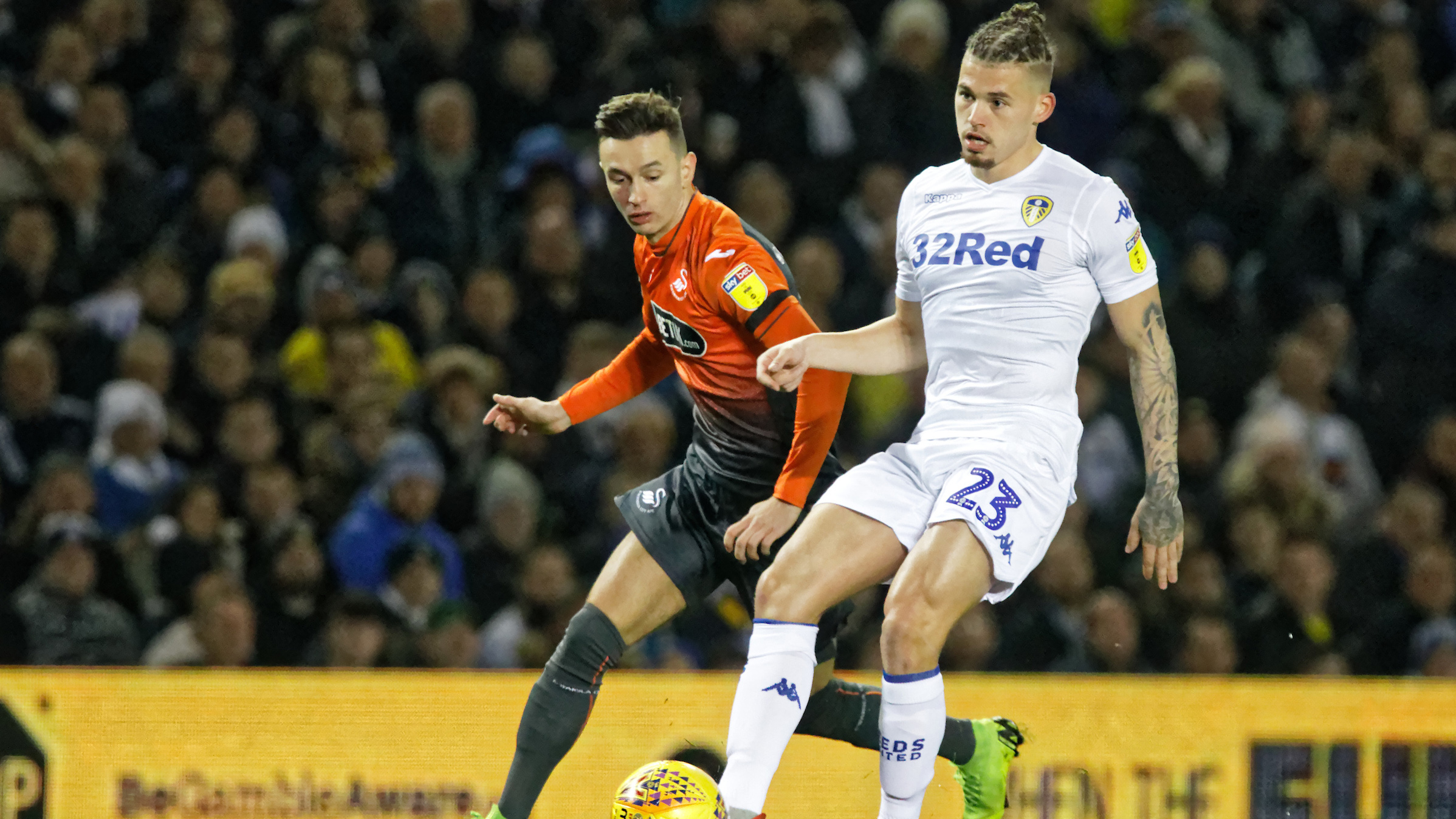 Swansea City's long wait for a win at Elland Road goes on as Oli McBurnie's late penalty was not enough to rescue a point against Leeds.

The hosts had surged into a 2-0 lead. Swedish defender  Pontus Jansson swept home the opener in the 20th minute after a deflected shot fell his way in the area, before Jack Harrison's glancing header flew past Erwin Mulder to double their advantage after 34 moments.

The Swans had encouraging passages of play but rarely tested home keeper Kiko Casilla until the closing stages.

McBurnie scored from the spot after Luke Ayling had fouled Joel Asoro to give them hope, but it was not enough and 1949 remains the last time the Swans beat Leeds here.

Potter had made three changes from the win over Millwall as Kyle Naughton, Jay Fulton and Barrie McKay all came into the side.

Matt Grimes moved to left back and Connor Roberts was pushed further forward.

It was a fairly cagey opening, with both sides feeling each other out with decent spells of possession without creating much of note.

The only effort on goal in the opening quarter of an hour was an ambitious Kemar Roofe effort that flew well wide of Mulder’s right-hand post.

Pablo Hernandez hit a volley into the ground and harmlessly wide from a rehearsed set-piece campaign, but the visitors were to take the lead a few moments later.

Swansea did not clear a corner, and when Ezgjan Alioski’s shot ricocheted kindly for Jansson to sweep home.

The hosts were soon on the front foot again, with Swansea just about managing to hold out after smart play from Hernandez found Patrick Bamford in the area.

But Swansea were so nearly level just before the half-hour mark.

A clever free-kick routine saw Fulton find McKay, but the Scotsman’s ball across the six-yard box was just beyond Mike van der Hoorn’s despairing dive at the far post.

Instead it was the hosts who doubled their lead on their next foray forward. Alioski found acres of space on the left flank and his cross was headed home by Harrison past a motionless Mulder.

It nearly got worse for the Swans as a superb ball from Hernandez was wastefully headed straight at Mulder by Bamford.

The visitors went in two goals down at the break but came close to pulling a goal back within seconds of the restart as a deflected Grimes free-kick struck the outside of the post.

Ten minutes into the second half Potter sent on Asoro for Fulton as the Swans struggled to trouble their opponents in the final third.

It was not long before McBurnie was also summoned from the bench in place of McKay.

But Leeds remained firmly in charge as Mulder parried a Roofe strike before the Swans eventually scrambled clear following a goalmouth melee just past the hour mark.

Mulder then denied Bamford and Roofe in quick succession as the pressure continued with little sign of relenting.

Swansea made their final change with 22 minutes to go as Luciano Narsingh replaced James, and the Dutchman could not make the most of a deep cross that came through to him seconds after his introduction.

Roberts worked Casilla from a tight angle, and Grimes fired a free-kick at the keeper before the Swans were handed a lifeline when Asoro was fouled in the area.

McBurnie converted the spot-kick for his 16th of the season but a point was not to be.