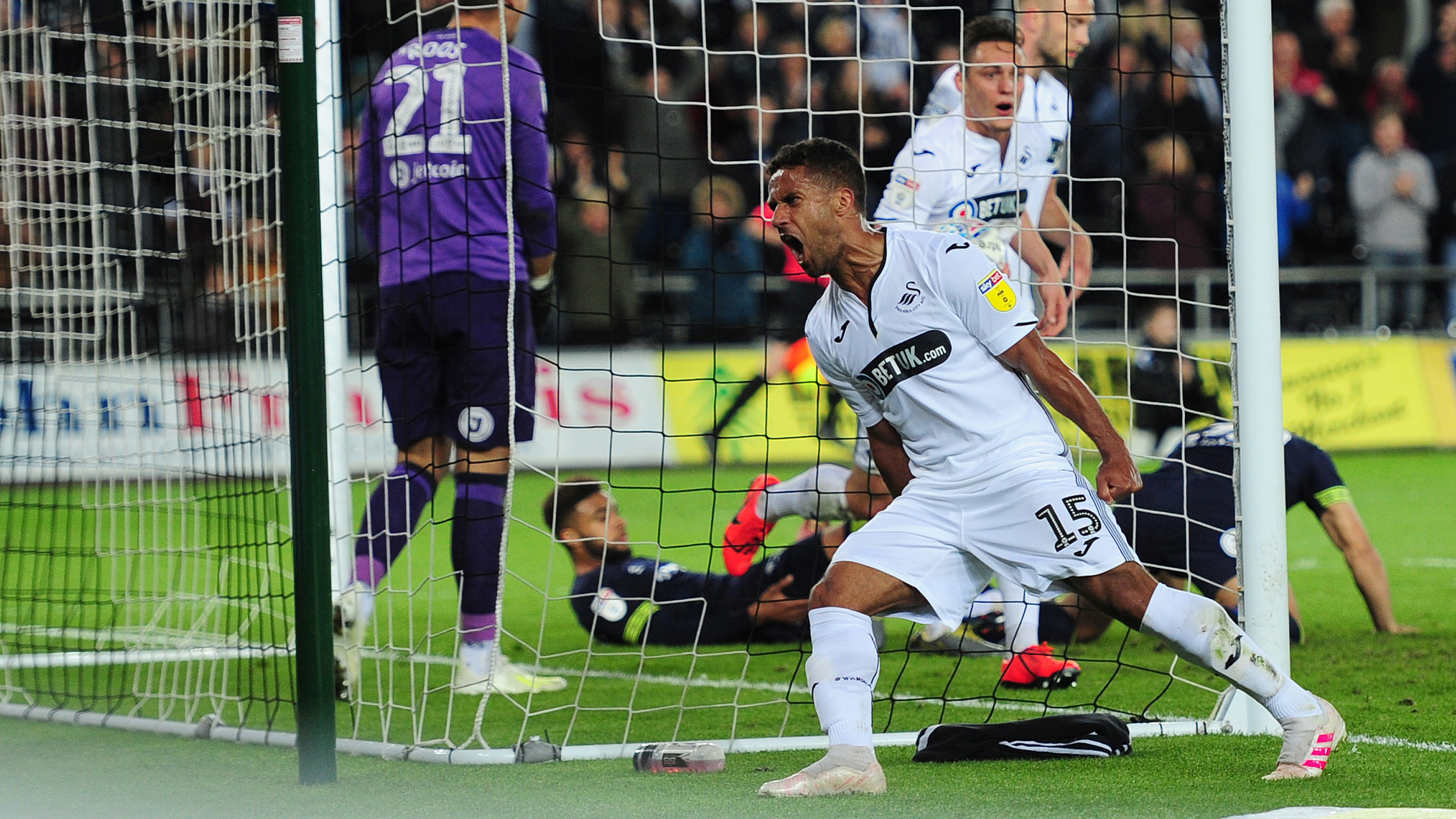 Wayne Routledge’s fifth goal of the season earned Swansea City a share of the spoils against play-off chasing Derby and made it 11 Championship games unbeaten at the Liberty.

The Rams had the better of the opening half and there could be few complaints about the half-time lead they deservedly held through captain Richard Keogh’s header.

But the hosts were greatly improved after the break and levelled as Routledge converted after Oli McBurnie’s header had been palmed onto the woodwork.

Both sides had chances to claim a winner during a frantic final 20 minutes but it ended all-square.

The evening offered a tantalising glimpse of what could have been for the Swans, who had seen their own play-off hopes ended by Hull City’s late comeback at the weekend.

Yet, even though the top six was no longer on the line, the hosts more than played their part in a full-blooded encounter.

After a wonderful reception for Swans legend Alan Curtis – who received a guard of honour from the two teams before kick-off – at his final home game before his retirement from coaching, both sides had encouraging moments during the early exchanges

It was the hosts who forced the first save of the night as Daniel James skipped infield to fire in a low strike that Kelle Roos held well.

At the other end Harry Wilson had an effort blocked, while Connor Roberts did well to get a foot in to stop Tom Lawrence in full flight.

But, gradually, the visitors began to exert some authority and Kristoffer Nordfeldt made a sharp stop after Mason Mount’s cross had been headed goalwards by Bradley Johnson.

However, they took the lead in the 22nd minute as a deep corner found skipper Keogh, and his header beat Nordfeldt and found the net via the underside of the bar.

Swansea were struggling to find the fluency seen so often in recent weeks at the Liberty, with James ending one genuinely threatening forward foray by spooning wide as the Rams’ rearguard backed away from him.

Barrie McKay worked an opening which saw an McBurnie strike deflected out for a corner but Derby ended the half on the front foot.

Lawrence and Mount led a rapid counter, and Cameron Carter-Vickers had to watch anxiously as his attempted clearance ran across the face of his own goal, before Nordfeldt tipped Wilson’s outside-of-the-foot effort over the bar.

The Rams started off the second half in similar fashion, and only an excellent Mike van der Hoorn tackle prevented Mount laying on an easy second for Martyn Waghorn.

The Swans responded with an excellent counter that saw James tee up half-time substitute Declan John, who was just denied by Roos’ trailing leg.

John’s fellow sub Jay Fulton then flashed an effort over the bar from a lovely reverse pass from Routledge.

It was a frenetic start to the second period, and the excellent Mount forced a full-length save from Nordfeldt after a mazy run.

But there was no doubt the Swans were improved on their first-half showing, and McBurnie came tantalisingly close to reaching a Roberts centre after more fine build-up play.

And the Swans got the leveller their pressure merited in the 67th minute. McBurnie met a Grimes corner with a firm header, Roos brilliantly parried the ball onto the post but Routledge followed in to slide home the rebound.

It set up a fascinating final 20 minutes on such an important night in the visitors’ season.

Derby roused themselves and started to have sustained pressure for the first time since the interval with the game now stretched wide open.

Van der Hoorn made a good block as Mount threatened at one end, while Routledge overcooked a cross at the other.

Jack Marriott fired wide on the angle after the Swans backed off a long ball upfield as the tension ratcheted up in the final five minutes but, in the end, there was no separating the teams.