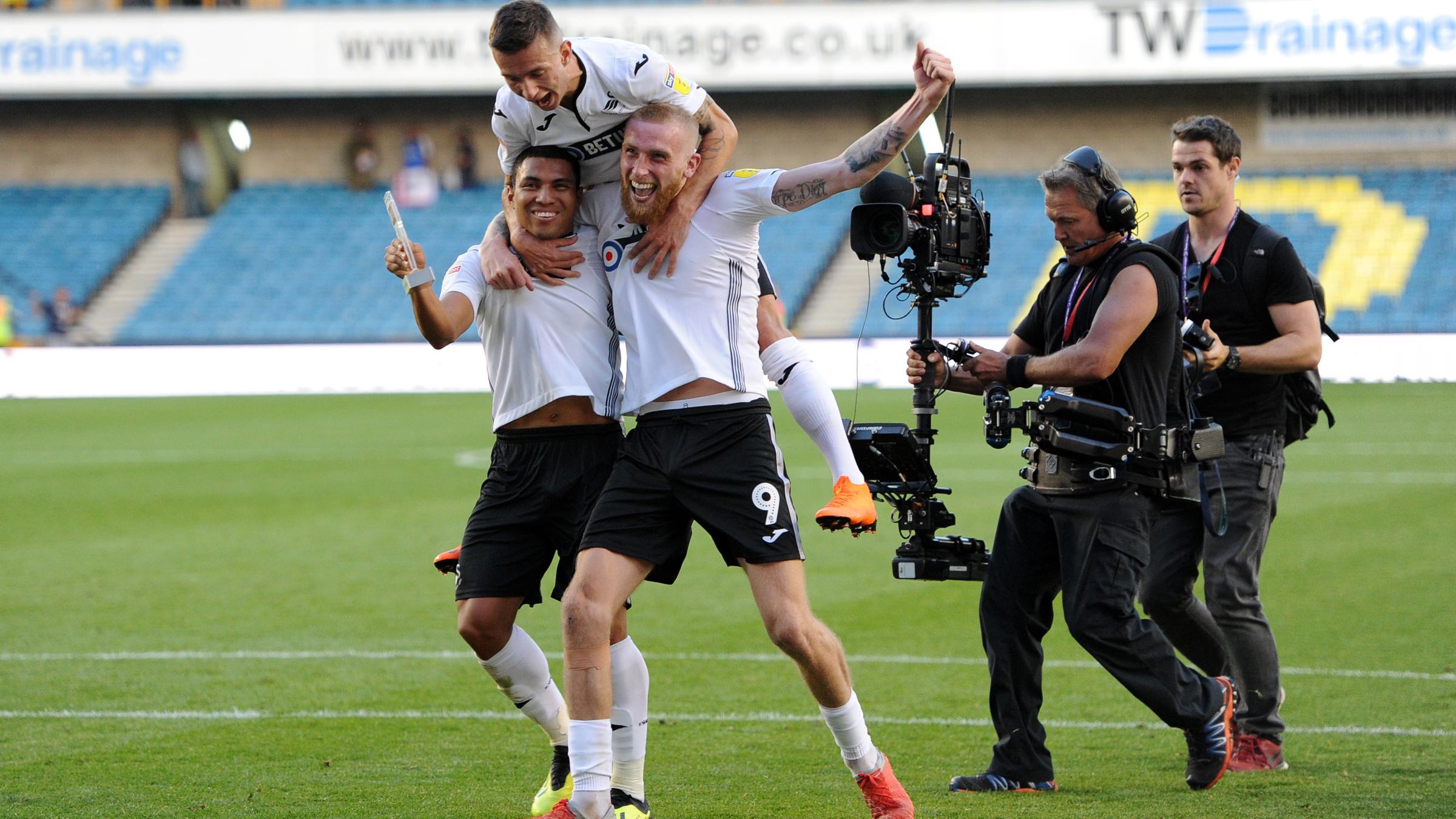 Swansea City produced a superb backs-to-the-wall effort at The New Den to record one of the most memorable victories of the entire season.

The visitors went down to 10 men in just the fifth minute when Courtney Baker-Richardson – making his league debut – saw red for a poor challenge.

Things got worse for Potter’s men Murray Wallace finished from a corner just past the hour mark.

But the Swans fought back, with Jefferson Montero’s introduction from the bench causing Millwall all manner of problems.

The Ecuador international set up Kyle Naughton for the equaliser, and was then the driving force of a thrilling break-out which saw he and Bersant Celina link to tee up Oli McBurnie for the winner.

It prompted wild celebrations between players, staff and fans at full-time, and put Swansea in the play-off places going into the international break. 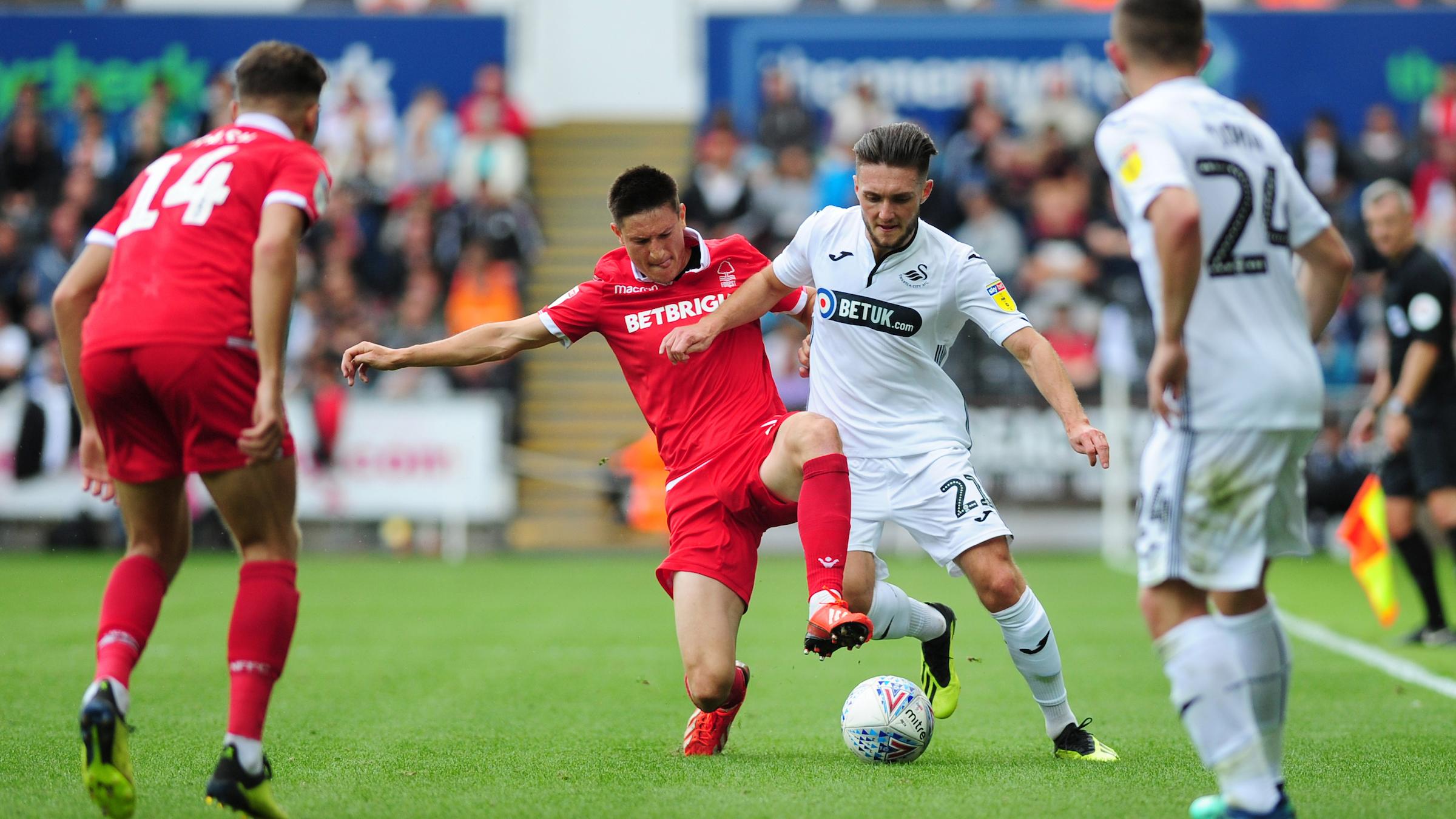 A frustrating afternoon at the Liberty Stadium ended goalless although Swansea remained in the top six.

The visitors had the better of the opening half with Ben Osborn and Matty Cash going close, while the Swans struggled for fluency and were not helped by injuries to Jay Fulton and Bersant Celina.

They were improved after the break, with Yan Dhanda working Costel Pantilimon in the Forest goal. But it ended all-square. 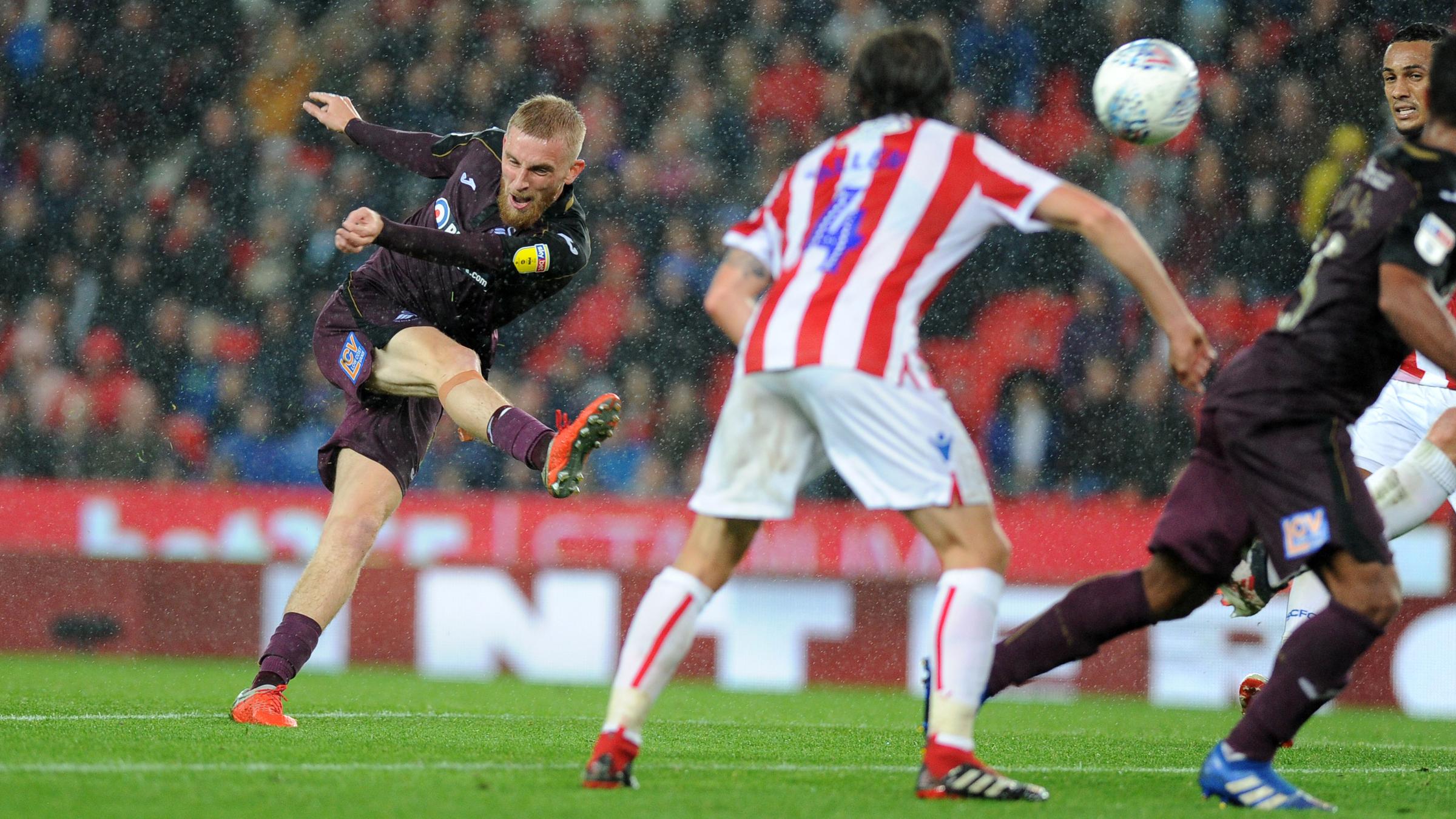 With Wayne Routledge and Nathan Dyer involved for the first time in the season, the Swans gave a good account of themselves with both wingers spurning presentable chances.

But, in the end, Allen would fire home the winner despite the midfielder and a number of other Stoke players being clearly offside when Tom Ince’s shot struck Benik Afobe.

Swansea did have a late rally, with McBurnie having a volley tipped over. 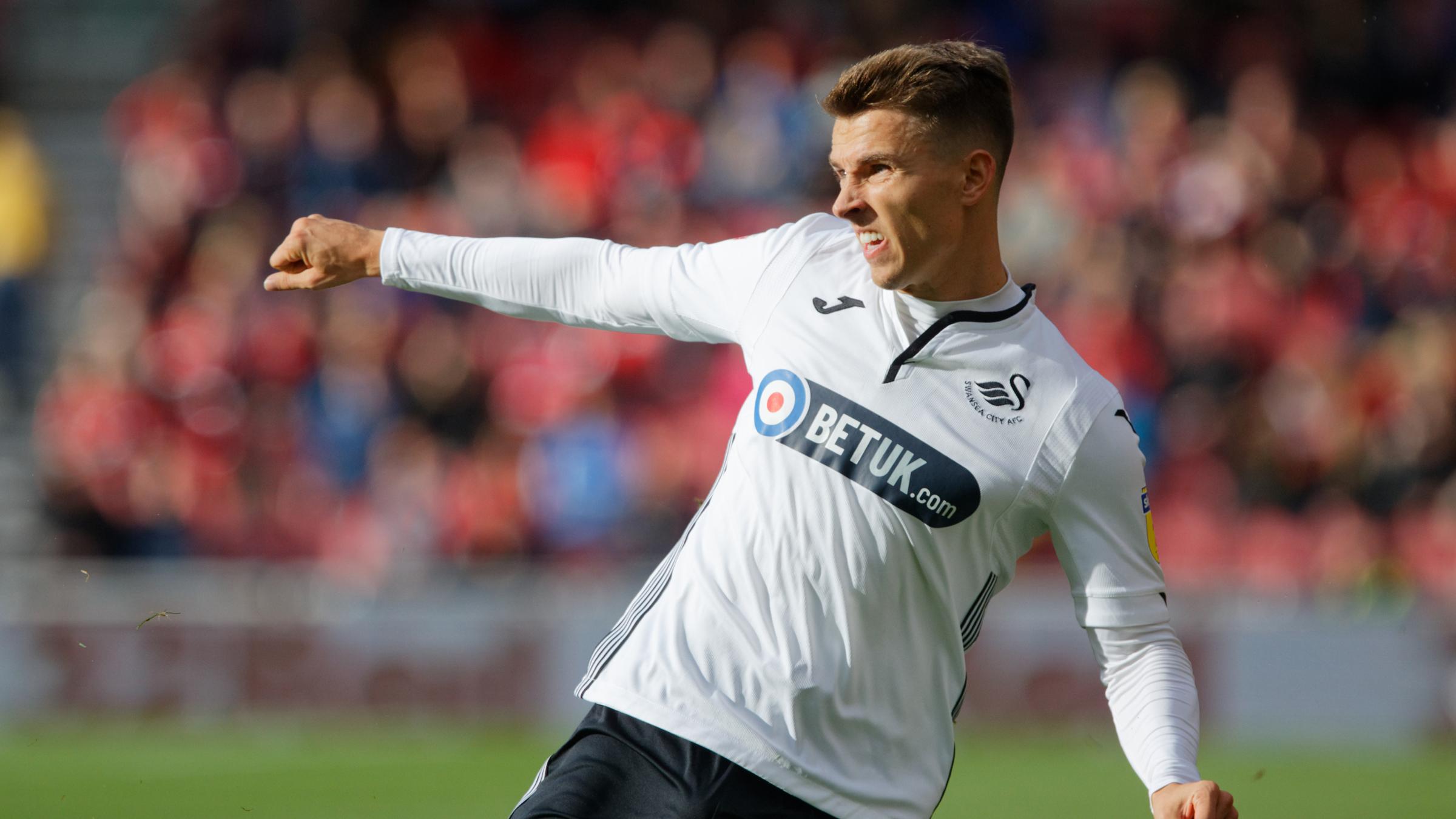 The Swans picked up a battling point on their travels against high-flying Middlesbrough at the Riverside Stadium.

The injury-hit visitors could have snatched all three points with Martin Olsson and McBurnie forcing saves from Darren Randolph in the Boro goal, while Tom Carroll’s cross struck the crossbar. 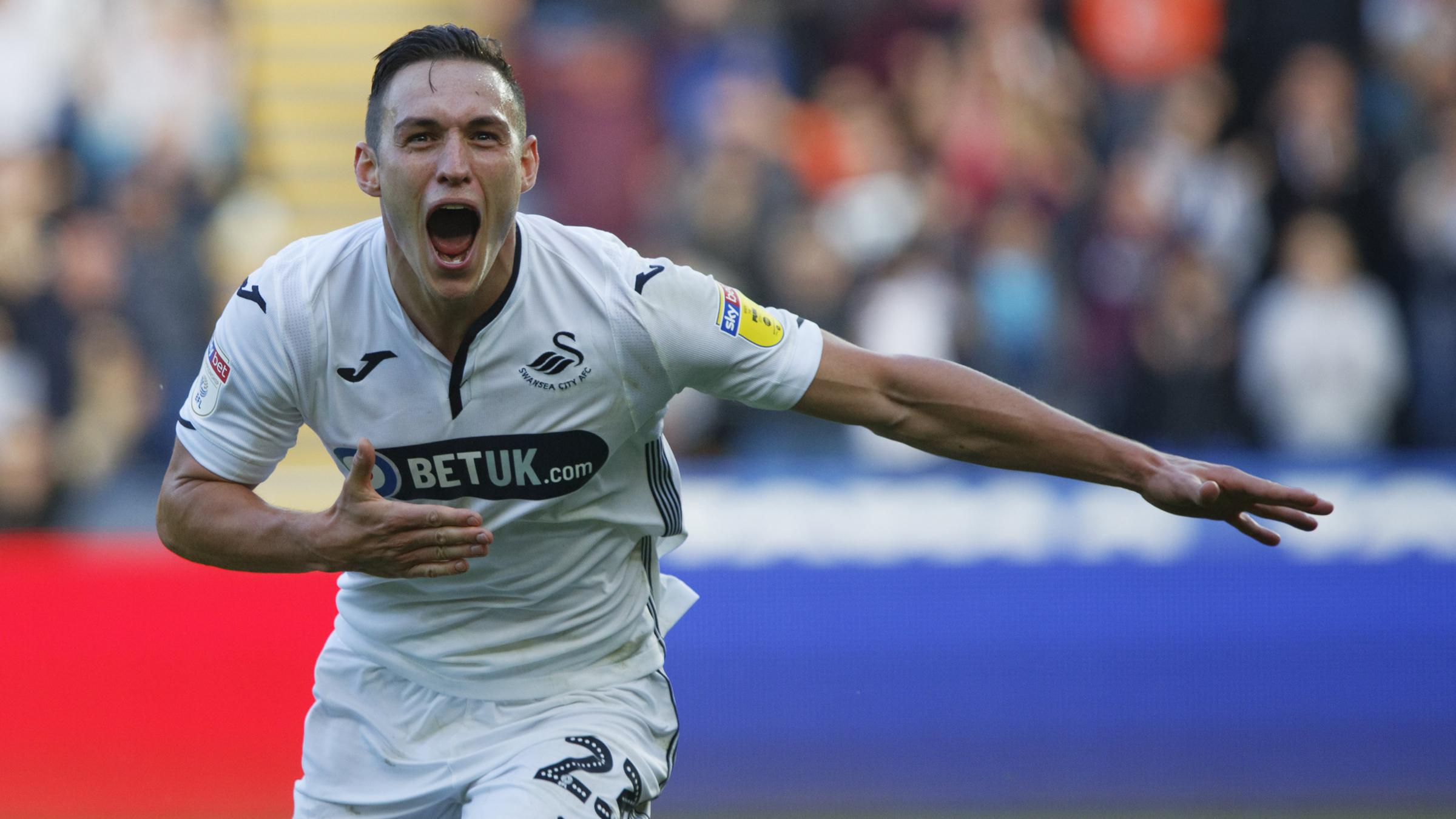 Swansea City ended their wait for a goal as they claim an emphatic Liberty victory over QPR.

Having failed to find the net in 291 minutes, Baker-Richardson scored his first Swansea goal on his return to the side following that red card at Millwall.

The striker volleyed in a McBurnie knock-down, and could have had a hat-trick by the break as the Swans dominated.

QPR – with former Swan Angel Rangel in their line-up – improved after the break, but the hosts put the game to bed as Connor Roberts finished off a smart team move for his first Swansea goal, before Jay Fulton wrapped things up.