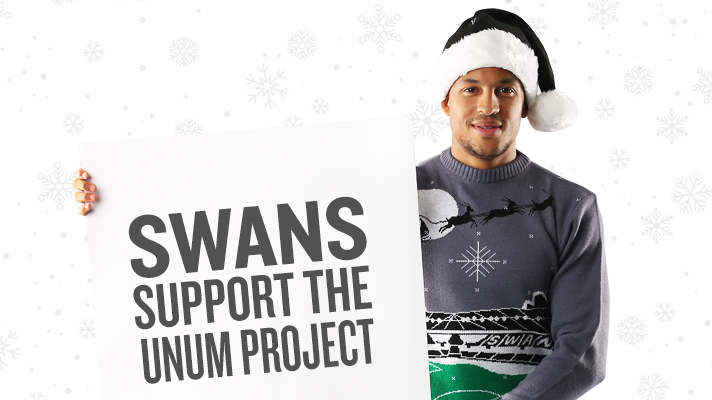 With seven weeks to go until Christmas, we are continuing the launch of our exciting festive campaign for 2017.

Entitled ‘Seven Swans A Giving’, the campaign ties in some fantastic weekly merchandise offers with important community initiatives that will bring plenty of festive cheer to those less fortunate than ourselves.

We kicked off our campaign yesterday with the release of our new Christmas range of products online and at our Liberty Stadium and city centre club shops.

Today we are officially supporting a new homeless scheme that was launched in the city recently.

Called the Unum Project, it is the brainchild of Gower College lecturer Duane Saunders, and delivers Street Boxes to the homeless containing the essentials to make life a little bit better.

“It became clear to me that the people I talked to on the street just didn’t have the essentials,” explained Duane, 31. “If they were given money they would obviously use it to buy food, but they wouldn’t necessarily have enough for other essentials.

“I felt that if we could try and alleviate the problem then it would make a massive difference to their day-to-day lives.’’

And that’s when Duane came up with the idea of the Unum Street Box; a simple shoe size box that people can fill with essentials, drop off at key points and delivered by the Unum Project volunteers to those on the streets. There’s even a special message card inside where people can leave a note to the recipient.

Previously Duane had been funding the project himself, but the Swans have agreed to cover all the costs going forward and support the Unum project as much as they can.

But now we will need the support of Swans fans to make a real difference.

The Street Boxes are available now from reception at the Liberty Stadium and our club shops at the Liberty and in the city centre. They are also available from Subway in Morriston and Gorseinon, plus the Living Room Letting Agency on Walters Road.

Once filled, they can be dropped off at the same venues - although the project is also looking for more collection and drop off points in the area - before being delivered onto the streets of Swansea and the surrounding areas.

To make a difference and find out more details, visit the Unum Project on Facebook HERE or contact Duane direct at duane.saunders@theunumproject.co.uk