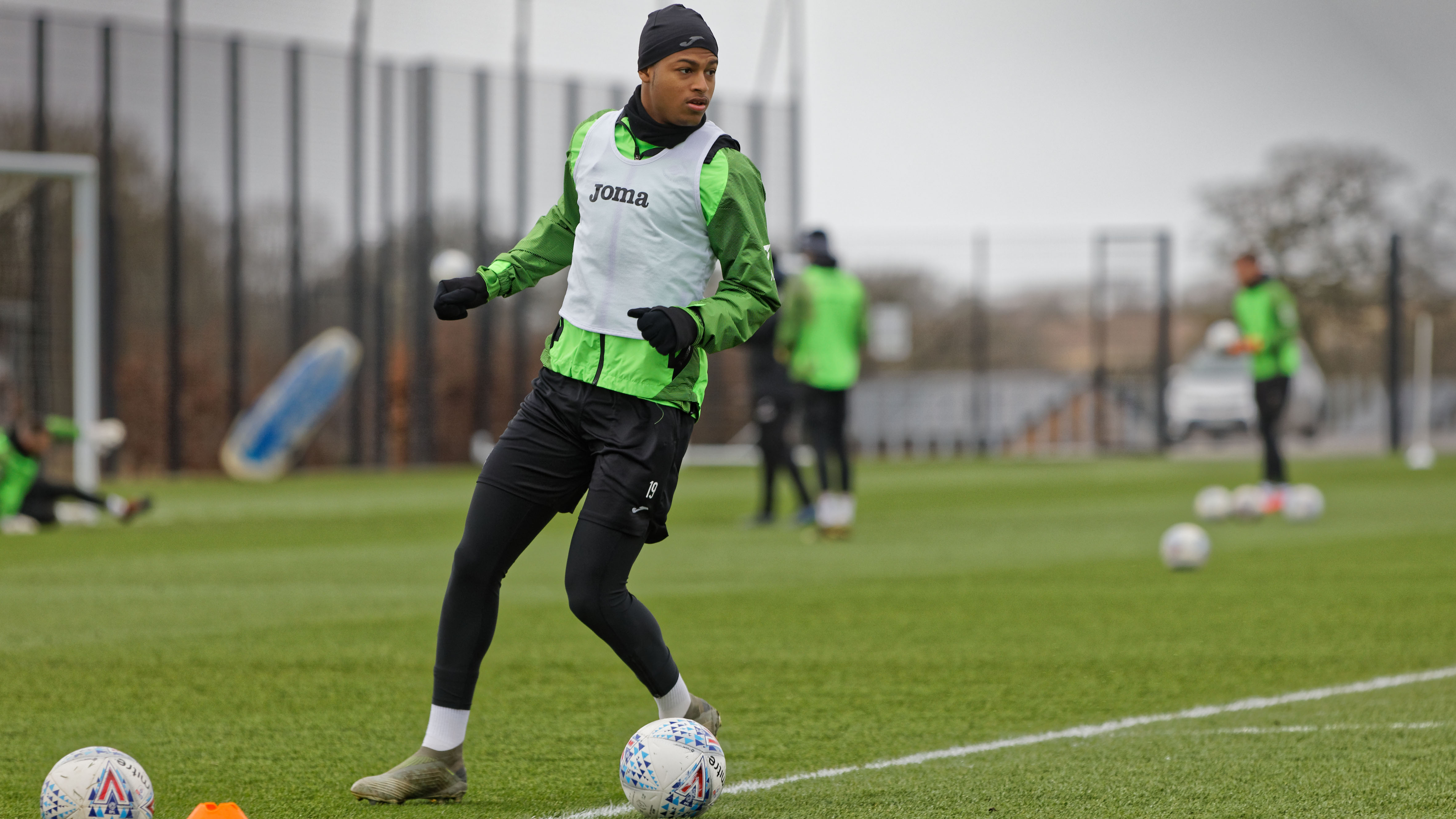 In the Spotlight | Rhian Brewster

With his Champions League medal around his neck, Rhian Brewster holds aloft the biggest trophy in European football.

Brewster is celebrating in front of Liverpool’s ecstatic fans at the Wanda Metropolitano Stadium in Madrid.

Just two years earlier, he was doing the same with the Under-17 World Cup trophy at Calcutta’s Salt Lake Stadium.

A World champion. A European champion.

Brewster is sat at Swansea City’s Fairwood Training Ground with a big smile on his face when those achievements, and that timescale, are put to him.

The grin has a sense of pride, not to be mistaken for arrogance, for this is a teenager with the world at his feet. But those feet are planted firmly on the ground.

It would be easy for a young footballer to get carried away with those achievements.

But Liverpool – Brewster’s parent club – and Swansea need not fear.

“I think there are plenty more chapters in my career,” Brewster says. “Winning the World Cup was a big achievement for me, as was being part of the team that won the Champions League.

“I may not have played in the semi-final against Barcelona at Anfield or in the final against Tottenham, but I was on the bench and that was an incredible feeling.

“But for me, it’s about being one of the main players in the team and helping to win silverware.

“If I can start this chapter by helping Swansea get back into the Premier League, then that would be a big step for me.”

The move to the Liberty offers Brewster the opportunity to play regular football at senior level.

Highly-rated at Anfield, there was plenty of interest in the striker when Jurgen Klopp opted to make him available on loan.

And first in the queue was a familiar face to the management at Liverpool.

With Cooper having helped develop such young talents as Raheem Sterling, Trent Alexander-Arnold and Wales international Ben Woodburn during his time as Liverpool’s academy chief, the feeling is that he can nurture Brewster too.

Add to that Cooper’s success with England at under-17 level, with Brewster playing a star role under him, and all the parts fall into place.

During their World Cup success in India, Brewster went on to score eight times in the tournament as England’s youngsters went all the way; coming back from 2-0 down to beat Spain 5-2 in the final.

His goal a minute before half-time started the comeback, with another current Swans loanee - Chelsea’s Marc Guehi - netting the fourth.

Brewster ended the tournament as the Golden Boot winner with hat-tricks in the quarter and semi-finals, part of an incredible World Cup both individually and as a team.

His return to club football saw Brewster, who swapped Chelsea for Liverpool as a 14-year-old, learning from the best in the business.

Under Klopp he would learn from the best in the business, listening to every word and watching every move from the likes of Mohamed Salah, Sadio Mane and Roberto Firmino.

For a young player learning his trade, it was an opportunity Brewster was keen to grasp with both hands.

“I think I’ve learned a lot from players who have probably been the best front three in the world for the past three years,” he says.

“I’ve learned a lot of different things from each of them – Bobby, Mo and Sadio – that I can hopefully bring into my game and help Swansea.”

Brewster’s Liverpool debut came in September during a Carabao Cup victory at MK Dons, where he played the full 90 minutes.

Another appearance followed in the next round – a 10-goal thriller with Arsenal that was settled by a penalty shootout.

Brewster, playing alongside the likes of Divock Origi, Adam Lallana, Alex Oxlade-Chamberlain and James Milner, stood up to take one of the spot-kicks to make it 3-3.

Liverpool progressed 5-4 in that crazy cup tie, and Brewster had now had a proper taste of first-team football.

He would get another taste of cup action – and his first experience of the Merseyside derby – when Liverpool and Everton were drawn together in the FA Cup third round.

Brewster came off the bench minutes after Curtis Jones’ stunning winner as Klopp’s young guns dumped the Toffees out of the tournament.

Having been part of that victorious Liverpool side that Sunday evening, Brewster was in south Wales on Tuesday as he completed his loan move to the Swans.

Fast forward only five days, and he’s playing in his second derby as the Swans headed to the Cardiff City Stadium to take on the Bluebirds.

For some, making their debut and dealing with the emotions, intensity and atmosphere of such a fixture would be tricky.

Not so for Brewster, who endeared himself to the Jack Army with a committed and energetic performance despite not making the scoring start he had craved.

“What a game to come into,” says Brewster as he reflects on the 0-0 draw last weekend.

“Our fans were brilliant. It was tough - they played a lot of long balls, so it was a bit of a fight, but the boys dug deep.

“I thought I played alright but I feel like I have a lot more to come. Obviously, it would have been nice to get a goal, but I’m all for the team. I didn’t help them as much as I would have liked but, hopefully, I can in the coming weeks.

“I will just take the positives from the game. It’s great to make my debut for the Swans and my first senior league appearance; it gives me confidence that I was thrown straight into the starting line-up.

“I was disappointed with my shots; I dragged them a bit. But I’ll get back on the training pitch and try to improve so that when I’m in those positions again, I can maybe score or hit the target at least.

“I’ll just keep trying to push on and help the team as much as I can.”

Next up for the Swans is a home clash with Wigan – a team Cooper’s men beat 2-1 last November thanks to Sam Surridge’s last-gasp goal.

Surridge has since returned to his parent club Bournemouth, with his departure paving the way for Brewster’s switch to SA1.

And with the Swans sitting outside of the Championship play-off spaces only via goal difference, Brewster is looking forward to playing his part in the final 19 league games of the season.

“I’ve come here to try and play a lot of games and score a lot of goals for Swansea,” Brewster says with a smile.

“It’s a great club. I’d been watching them for ages – particularly when they were in the Premier League.

“Hopefully, I can help them to get back where they belong because this is a club with great people and great facilities. The fans, too, deserve it.”

With Champions League, World Cup and Golden Boot trophies already in his cabinet, Swans fans will hope Brewster’s collection will include a Championship medal come May.