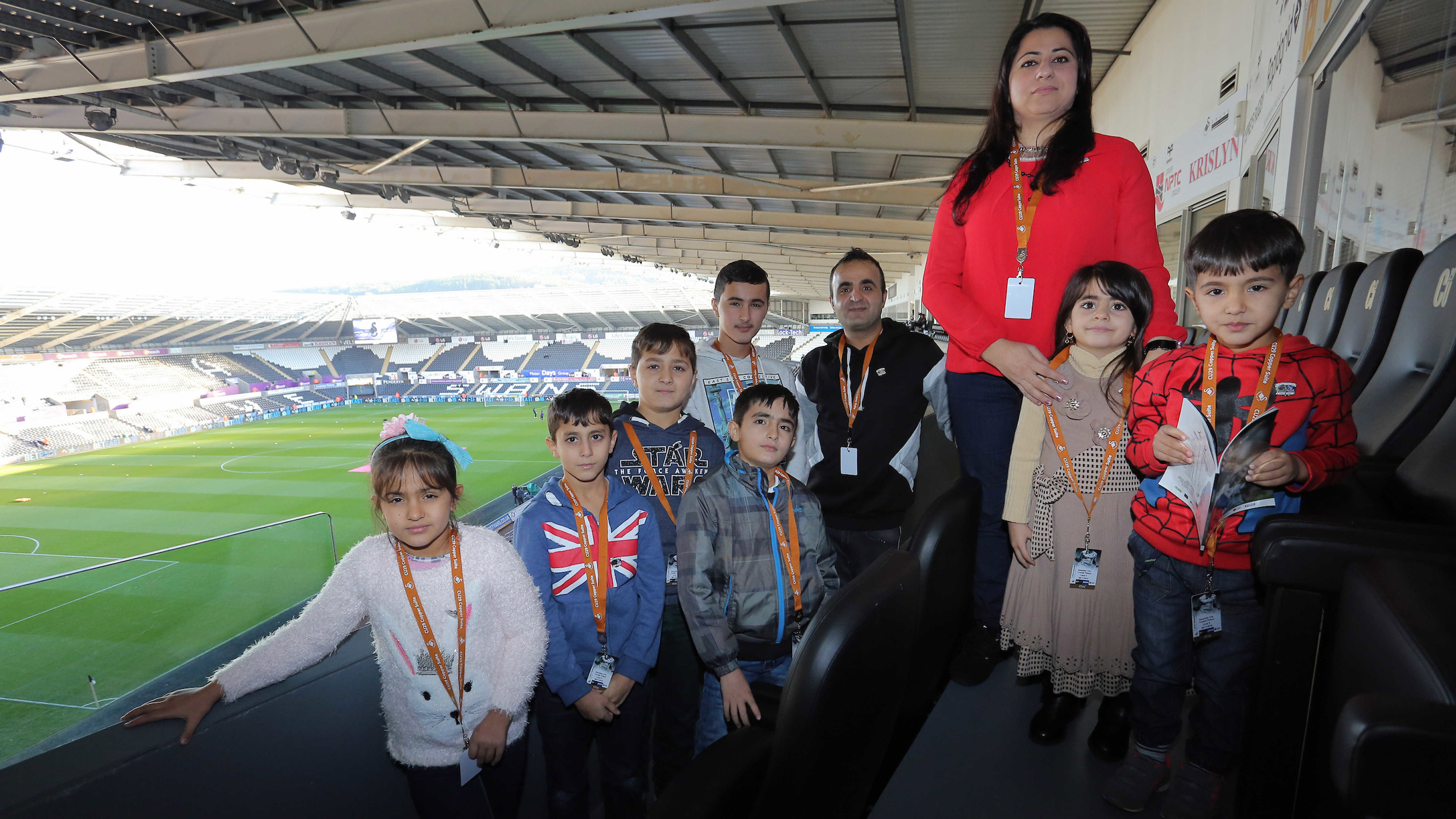 Swansea City put a smile on the faces of seven brave refugee children after rolling out the red carpet for the recent visit of Crystal Palace.

The seven children were given the full VIP treatment at the Liberty Stadium as the club opened the doors to their plush CU29 hospitality box where they were greeted with a meal, refreshments and plenty of Swans gifts. They even had the chance to cheer Bob Bradley's boys to a thrilling 5-4 victory.

The children, aged between five and 13, were rescued by their Swansea-based uncle, Aram Faraj, from a Bulgarian refugee camp after fleeing for their lives from Iraq with their parents.

Tragically, three of the four parents from the two related families froze to death on the journey across the Turkish border.

Aram, a Swansea City fan, answered his sister's SOS call for assistance after they faced hunger, illness, violence, police brutality and trafficking gangs in a desperate fight for survival.

Having been living in the UK since 2005, Aram left his daughter and his job in Swansea to travel to Bulgaria where he spent 10 months helping to keep the children safe and battling relentlessly to get them asylum in the UK.

His perseverance finally paid off and he managed to fly the children and his sister, Trifa, to Swansea and safety.

The rescue mission has left Aram struggling financially as he had to give up his job and pay for all the flights to the UK himself after borrowing money from friends in the Iraqi community around Swansea.

All seven children currently live with him in Swansea in a one-bedroom flat while he goes through the process of gaining legal guardianship and applying for suitable accommodation with social services.

Four of the children have already started school locally, but it is a constant battle to feed and clothe them on Asylum Seekers Allowance of £5 per child a day. To make matters worse, as Aram was out of the UK for more than six months he cannot even claim benefits for himself or work full-time due to the fact that he has to look after the children.

Having heard Aram's story, Swansea City owners Stephen Kaplan and Jason Levien agreed to help and are paying his legal fees to gain guardianship of the children and full leave to remain in the UK.

The club has also vowed to continue helping Aram and the seven children on an on-going basis.

Aram said: "The families knew they had to leave Iraq because their lives were in danger. When they eventually reached the Turkey-Bulgaria border they were soaking wet and freezing cold after walking for 24 hours.

"The police searched them, took all their money, mobile phones, jackets, food and even shoes from the children. They drove them for four hours in a car, left them in the freezing snow and told them they had to go back to Turkey.

"My brother and my sister's husband decided to go and try to find help, but they never came back. One of the children who was with them died - she was only 12-years-old.

"Some of the children were left with frost-bitten feet and one of the five year old children was also held hostage by people smugglers for a month until I paid for his freedom.''

While life is still tough, selfless Aram is just happy the children are finally safe after such a traumatic ordeal.

"They had such a bad life in the Bulgarian camp,'' added Aram. "They are still finding it so difficult to come to terms with everything they've been through, especially losing their parents, but they are just so happy to be here safe in Swansea.

"Everyone in Swansea has been fantastic and has helped where they can. And I can't thank the Swans enough for what they are doing for us as a family.
"The children had an amazing day on Saturday and to see the smiles on their faces meant the world to me and Trifa.

"Not only was it a fantastic game, but the children got to go pitchside and even met a few of the players and their wives afterwards.

"I know it will be a day they will never forget.''