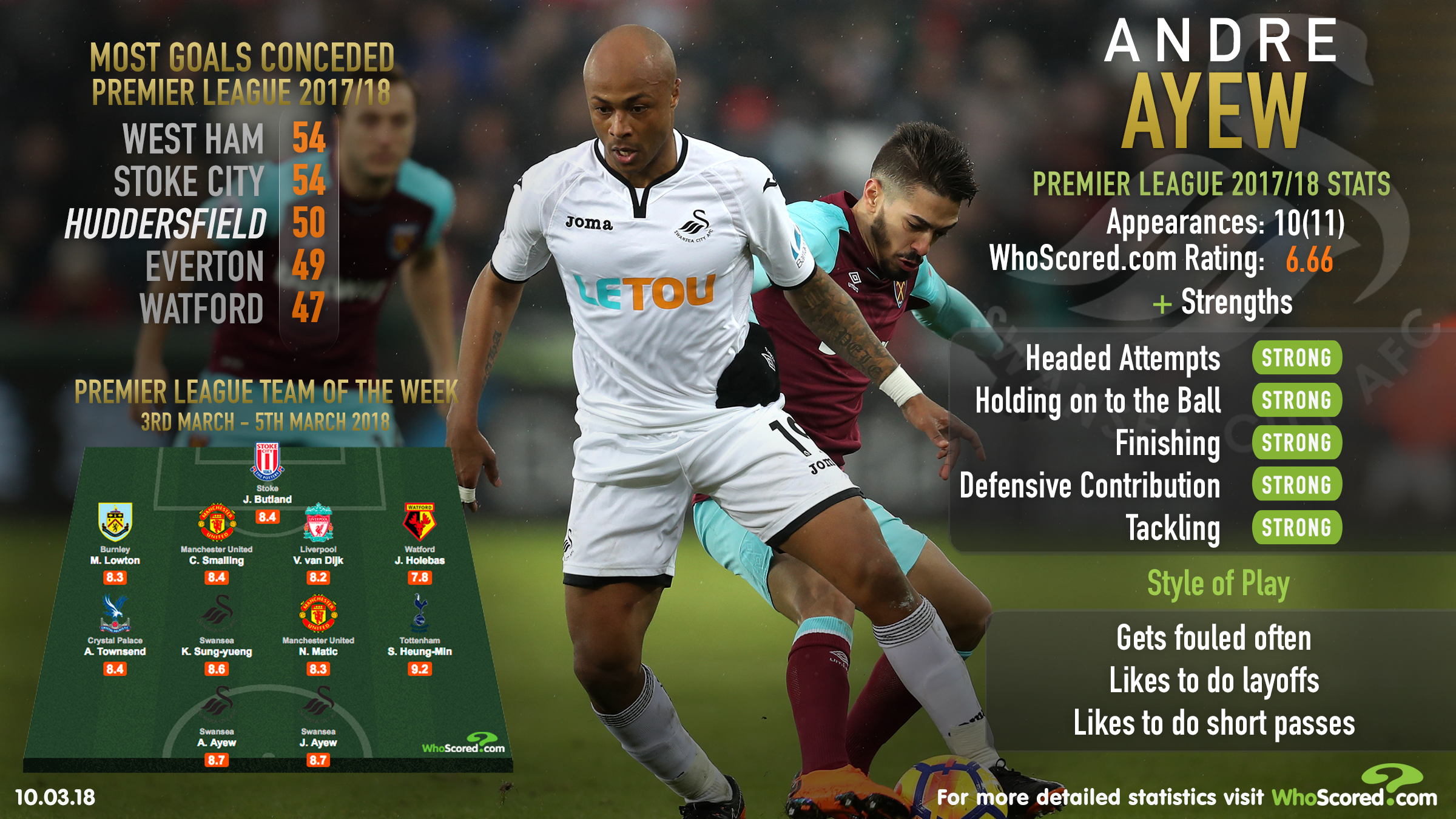 Football stats experts WhoScored.com take a look at Andre Ayew ahead of Swansea City’s clash with Huddersfield Town at the John Smith’s Stadium this afternoon.

Swansea’s confidence is high following a morale-boosting 4-1 win over West Ham last time out, and they will look to carry that good form into the meeting with Huddersfield.

The Terriers fell to a 2-0 defeat at Tottenham last weekend and have now lost six of their last eight top-flight matches.

Having defeated Huddersfield at the Liberty Stadium earlier in the campaign, the Swans will look to do the double over the Terriers this afternoon.

Andre Ayew was not around for the initial meeting between these two having only returned to South Wales in January, but the Ghanaian has previous against Huddersfield this season.

He played a starring role when former team West Ham defeated the Yorkshire side back in September, scoring one and assisting another in a 2-0 win.

What’s more, Ayew made a notable impact on his first league start following his return to the Liberty Stadium last weekend as he provided an assist in the comprehensive win over his former side.

Ayew’s performance saw him gain a WhoScored.com rating of 8.69, enough to secure a spot alongside brother Jordan Ayew in attack in the Premier League team of the week.

He’ll look to again land a place in this weekend’s top performing XI and undoubtedly has the means to bag his first league goal following his return to Swansea.

The 28-year-old has developed a statistically calculated WhoScored.com strength of ‘finishing’, while Huddersfield’s defensive solidity has been called into question on a number of occasions this term.

Indeed, only West Ham and Stoke (both 54) have conceded more Premier League goals than the Terriers (50) this season.

Provided the chances are created for Ayew, he has the goalscoring means to tuck away these opportunities and secure a vital three points for Swansea.

That being said, Huddersfield are unlikely to allow Ayew the time and space to flex his attacking muscles having been put to the sword by the forward earlier in the campaign.

It is crucial for Huddersfield that defender Christopher Schindler limits Ayew’s impact in the final third and, having gained a better WhoScored.com rating (7.15) than any other Huddersfield player, the German boasts the defensive nous to keep his Swansea counterpart at bay.

What’s more, only Nicolas Otamendi (five) and James Tarkowski (four) have won more WhoScored.com man of the match awards than Schindler (three) of Premier League centre-backs and if Schindler can keep Ayew quiet, then a crucial result could be headed Huddersfield’s way.

Ayew, though, has the quality to punish a leaky Huddersfield defence, as he did so effectively earlier in the campaign.

A similar performance today will see Swansea land a fifth win from their last seven Premier League matches in their quest to move away from danger in what is a key game.