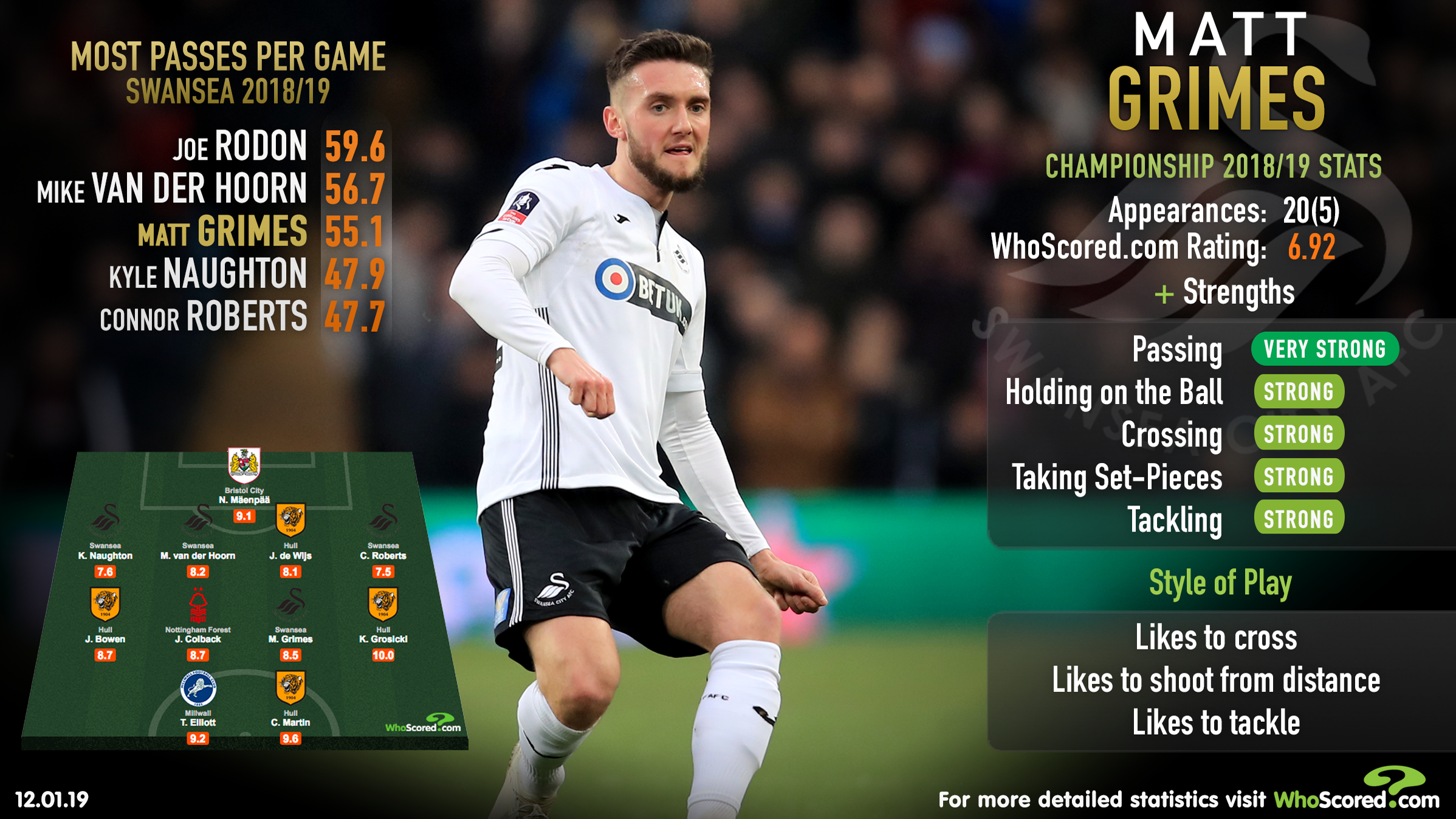 Swansea return to league duties after securing their spot in the next round of the FA Cup with a comfortable 3-0 win over Aston Villa and, after a 4-1 triumph at Reading to kick off 2019, Graham Potter will be looking to land a third successive victory at Preston’s expense.

Alex Neil’s side have endured a downturn in form having failed to win in four in the league and it leaves them 17th, just seven points above the relegation zone.

Here, WhoScored.com look at how the Swans can inflict further misery upon Preston this afternoon.

To kick off the year, Swansea had four players in the Championship team of the week after a dominant display at the Madejski Stadium and having won four of the last six meetings with Preston, they’ll be confident of putting another three points on the board today.

One of the four players to make the WhoScored.com team of the week last time out was Matt Grimes, who landed the man of the match award with an 8.48 rating. After a solid display in the 3-0 win at Villa Park, the 23-year-old will be looking to maintain his good form at Deepdale.

His man-of-the-match display at Reading pushed his average WhoScored.com rating for the season up to 6.92, that is the fifth best of all Swansea players this term, and you wouldn’t bet against Grimes controlling proceedings in the middle of the park once more.

He boasts the ideal qualities to succeed in the middle of the park, with his ball winning tendencies landing him a statistically calculated WhoScored.com strength of ‘tackling’.

Indeed, a return of three tackles per 90 ranks among the top 10 of those to have made at least 15 Championship appearances this season and allows for Grimes to routinely deny opponents when they encroach upon the Swansea defensive third.

Not only that, but a statistically calculated WhoScored.com strength of ‘passing’ means Grimes boasts two attributes that are ideal for any battling midfielder.

His average of 55.1 passes per game is the third best of all Swansea players in the Championship this season and highlights his ability to successfully win the ball for his side and recycle possession effectively that allows Swansea to dominate teams.

Grimes’ ability to win back possession for the Swans means in-form Preston frontman Lukas Nmecha will have a hard time adding to his impressive goal return of late.

The youngster may have had a direct hand in just five league goals this season, but Nmecha has scored two and assisted two in his last six league outings, which includes a man of the match display in a battling 1-0 win at Nottingham Forest.

Having struggled in Preston’s FA Cup loss to Doncaster, though, there is a way to keep Nmecha at bay and Grimes, as his recent performances have shown, is more than capable of limiting the young forward’s impact at Deepdale.

A similar showing to the one seen in the 4-1 win at Reading earlier in the year would likely see Swansea come away with another three points and Grimes land another spot in the WhoScored.com team of the week.