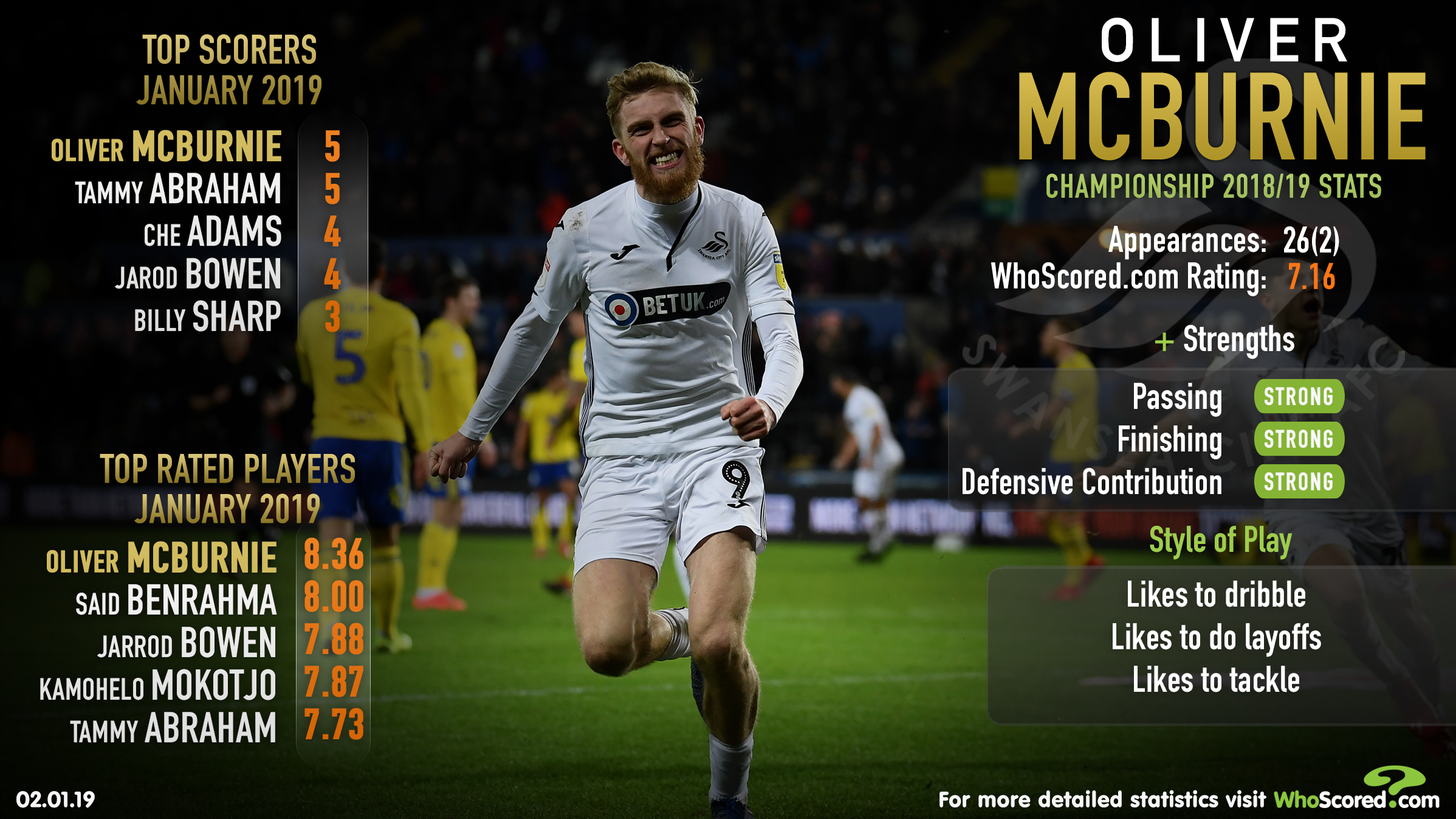 Football stats experts WhoScored.com take a closer look at the form of Oli McBurnie - who scooped their January player of the month accolade - as Swansea City prepare for the trip to face Bristol City at Ashton Gate (3pm).

Rescuing a draw from the jaws of defeat late on may have been cause for celebration for Swansea supporters in the 3-3 thriller with Birmingham on Tuesday night, but Graham Potter may well consider it two points dropped at the Liberty Stadium against a potential top-six rival.

Nevertheless, attention turns to today’s trip to Bristol City and WhoScored.com have previewed the meeting between the clubs at Ashton Gate.

The draw may have dented Swansea’s play-off push but, in the process, Oli McBurnie’s late equaliser extended their unbeaten run in all competitions to seven matches.

Five of those have come in the league, in what is currently the third-longest unbeaten run in the Championship. Today’s opponents Bristol City top that metric, with the Robins now on a 10-game unbeaten run in England’s second tier, and that has moved them to within two points of the top six.

Four successive wins have played a key role in their rise up towards the play-off places, yet Swansea have previous with halting in-form opponents’ respective runs having ended Sheffield United’s winning streak earlier this year.

A repeat of their last visit to Ashton Gate, a 2-0 win back in 2011, would propel Swansea back into the play-off race and, in McBurnie, Potter has the Championship’s in-form frontman to fire the Swans to victory.

Indeed, no player scored more Championship goals than McBurnie (5) in January, while his WhoScored.com rating (8.36) means he was the player of the month.

The 22-year-old has now scored in each of his last four competitive outings, netting seven times and providing a further assist in that run, to reinforce a statistically calculated WhoScored.com strength of ‘finishing’.

Having now scored 13 league goals this season, McBurnie has the goalscoring means to put the Bristol City backline to the sword in the West Country this afternoon.

He’ll need to be on top form in order to find a way past the Bristol defence though. Only Middlesbrough (20) have conceded fewer goals than Bristol City (29) in the Championship this season, with their defensive resolve vital to their success so far.

McBurnie rightly made the WhoScored.com Championship team of the month, but so too did Bristol City centre-back Tomas Kalas, who earned a WhoScored.com rating of 7.60 in January.

The Robins have conceded just one goal in 2019, with the 25-year-old centre-back playing a vital role in their fine record in January.

Boasting a WhoScored.com strength of ‘concentration’, Kalas can be expected to keep a level head at Ashton Gate today and he’s unlikely to be fazed by McBurnie’s fine form.

That being said, if the Scot plays to recent standards then the Bristol City defence are set to endure a tough 90 minutes against the Championship’s on-fire forward.

If McBurnie can continue his rich vein of goalscoring form, then Swansea can be expected to maintain their unbeaten run and end Bristol City’s in the process.